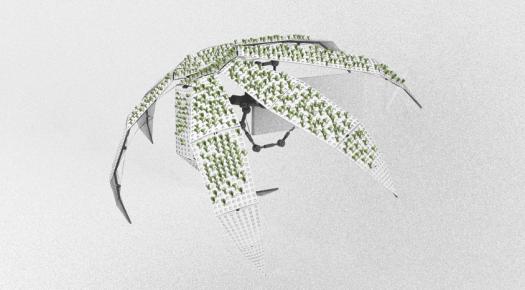 At day, it will stretch out to catch the sun. At night, the wings will close around a billboard. NAS-DRA
SHARE 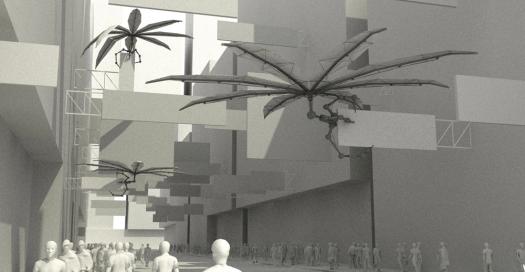 The drones perch on billboards during the day, and then fold their wings to obscure the ads at night.

Design collective NAS-DRA has a concept for parasite drones that flutter about cities, attaching themselves to billboards and using sunlight during the day to feed the plants embedded in the drone’s wings. Like a flower in reverse, the wings of these drones will fold completely around a billboard at night, protecting people below from the ads and filtering the air. It’s a beautiful concept and commentary on both pollution and public space, it all seems a bit more ambitious than technology currently allows. Plus, if the term “drone” has a bad reputation, the term “parasite drone” might just send people indoors forever.

At day, it will stretch out to catch the sun. At night, the wings will close around a billboard.

The history of aircraft that carry airplanes is surprisingly long and mostly filled with failure. Vehicles big enough to carry other vehicles through the air are either giant targets or are only capable of carrying small fighters. On Monday, we covered a new DARPA project that aims to change that. DARPA wants a plane that can release drones from the sky and have them return to their airborne mothership for refueling and repairs.

The biodrone is a concept in sustainable droning: With a body made from mushroom fibers, the drone doesn’t pollute the environment if it’s lost; it eventually decomposes down into nothing. Or, well, almost nothing. As Popular Science wrote earlier this week, the current version uses regular quadcopter engines and rotors, so it leaves a drone skeleton. Future versions of drones inspired by the biodrone could save scouts the hassle of destroying their equipment if it gets lost.

The ongoing saga of drones buzzing around French nuclear reactors continued this week, despite the arrest of a few hobbyists found with a small drone earlier this month. Now some French government sources are claiming that the special police that guard nuclear reactors are authorized to shoot down the drones. As drone flights continue, however, none have been shot down.

This week, major commercial drone company DJI announced their brand-new Inspire quadcopter. Looking like a futuristic, cyberpunk reboot of their classic DJI Phantom quadcopter, the Inspire breaks away from the level construction of most quadcopters and embraces the verticality of being an aircraft, with rotor arms angled up from the body and a camera pod suspended below. It comes with a new, improved camera, a dedicated controller, and an app. Ideally, it will make everyday filming with a drone as easy as OkGo. Watch it fly below.