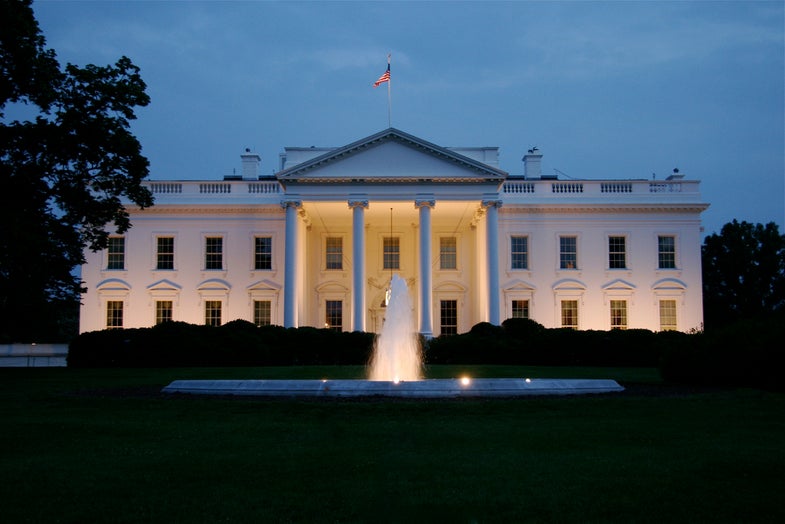 How exactly do you protect the president from a dangerous toy? Ever since a drone crashed onto the White House lawn, the Secret Service has been looking for an answer to that question. To figure out just how to keep quadcopters from the executive mansion, last week the Secret Service announced they were conducting exercises involving unmanned aerial vehicles. Now we know a little bit more about what exactly those exercises entail.

A CIA official who spoke with the Associated Press on the condition of anonymity says the Secret Service is looking at signal jamming. The source noted that service members flew drones in the wee hours of the morning, from 1 a.m. to 4 a.m, and then likely used anti-drone countermeasures against their own vehicles to see if jamming worked. The AP suggests that the tests were done so early so as to minimize any unintended effects on nearby electronics. Remote controls for drones use radio waves just like WiFi does, and jamming the GPS signal for a drone could also jam the GPS signal for nearby cell phones. The jamming technology the Secret Service utilized most likely isn’t that revolutionary, as personal anti-drone jammers already exist. However, they’re generally illegal to use, unless you’re the federal government, which the Secret Service most decidedly is.

Jammers aren’t the only way to stop a drone, but they’re probably the most outwardly unobtrusive. Drones can come hard-programmed to not fly near the White House, or even the entire 17-mile radius of restricted airspace around Washington. Indeed popular drone-maker DJI is doing just that, but the programming doesn’t apply to home-built drones or ones modified by users to get around that restriction.

Anti-drone interceptors also exist, from the rotor-clogging Rapere to the French made kamikaze and net-carrying options, though those would create far more spectacle than simply interfering with quadcpter signals. Simple netting, used often at drone trade shows to keep small drones confined to their exhibits, could also work, if the President wanted to live inside a net all the time.