The Week In Drones: Shooting One Down In Montana, The FBI’s Robot Missions, And More 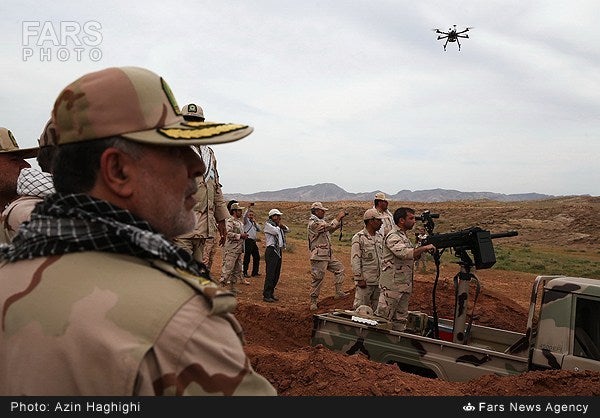 Released on Wednesday by Iran’s state-run Fars news service as part of a slideshow about border protection, the photo above is notable for the hexarotor drone flying with the patrol. The rest of the equipment is fairly standard for a light patrol, with troops in camouflage and a heavier gun mounted in the back of a truck, but the drone adds a contemporary touch to what could otherwise have been an image from any time in the last 30 years.

Matt Rosendale is running for Montana’s single congressional district on a strong anti-drone platform. This 30-second spot shows a drone filming him, before Rosendale knocks it out of the sky with a rifle blast. It turns out it’s a bit tricker than that to shoot drones down with small arms.

Watch his campaign ad below:

Every FBI Drone Use So Far

Thanks to a Freedom Of Information Act request by MuckRock, a collaborative transparency site staffed by journalists and researchers, there’s now a publicly-available timeline of every time the FBI has used a drone within the United States. The timeline is full of redactions and censored, but the presence of the documents is enough to flesh out how the FBI uses flying robots.

In the documents there are eight drone missions, five approvals for other missions, and a proposal for drone use. This puts the potential total of FBI drone missions at 14, or four more than the FBI had previously admitted. The FBI first used a drone in late 2006, but their use of drones really took off in 2011, with the remaining 13 uses all after that point. Mission included busting a large-scale dog-fighting ring and standard drug enforcement.

It’s an incomplete history that we’re only just now uncovering, and shows that the FBI saw the merit of drones close to a decade ago.

Drone Law In Louisiana And Pennsylvania

Two different bills introduced in the Louisiana state legislature would restrict drone use by private citizens. The better-named bill is SB 330, the “Deterrence of Reconnaissance Over Noncriminal Entities” (DRONE). It would make private photography of individuals or others’ private property a criminal offense. The other, SB 346, bans private and commercial operators from using drones to film federal facilities, transportation systems, water treatment and chemical plants, and basically anything else an environmental or public health watchdog group might want to record.

In Pennsylvania, the state senate is considering a much more modest bill. SB 1334 prohibits using “an unmanned aircraft in a manner that interferes with another person’s lawful fishing or boating.” Good to know that the Quaker state is protecting fish from flying robots.