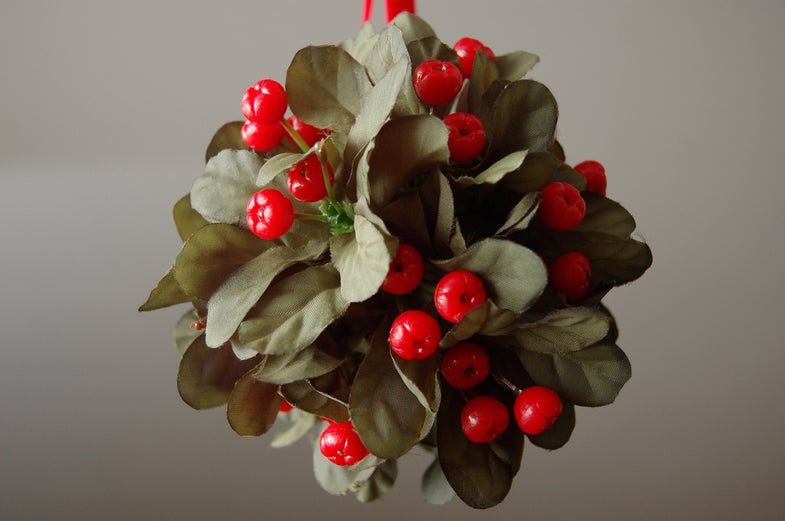 Circling overhead, the drone finds its prey seated below. The robot is looking not for specific identifying characteristics of people, but rather suspect behaviors. In the booth by the window, both patrons just scooted closer to one another and are now sitting leg-touching-leg. The behavior registers, the robot flies, and then hovers perfectly overhead. It’s dangling tendrils of mistletoe, encouraging the pair to overcome any hesitation and lock lips. The drones camera records the moment. The overlords at corporate are pleased.

Such is the vision of the future promised by a new holiday-themed ad for casual dining chain TGI Friday’s in the United Kingdom. In just over a minute’s time, the drone (which appears to be a DJI Phantom) flies over several restaurant patrons. Strapped beneath its body is a sprig of mistletoe and a camera, ready to record the moment if it happens. A server pilots the quadcopter with a remote-control handset, and the bartender ties on the festive parasite.

This mistletoe drone is the latest in a long line of gimmick drones, where something fairly mundane, like hanging mistletoe or delivering pharmaceuticals across a river is made exciting by doing it with a remote control aircraft. It’s a common enough tactic that Netflix made an ad mocking the idea last February.

The TGI Friday’s ad opens with the claim that “over half of adults in the UK have never had a kiss under the mistletoe.” With the mistletoe drone, the restaurant chain wages war on holiday glumness. Lonely customers in sight may soon hear rotors overhead, flying a subtle message: NOW KISS.