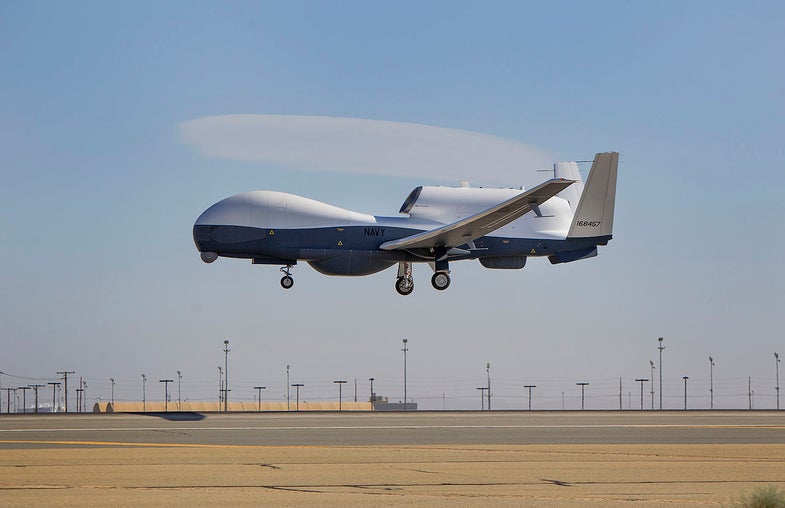 Most drones are actually human-piloted, with the controls elsewhere and the pilot steering remotely. In this video, the pilot is itself a humanoid robot, learning how to fly an airplane in a flight simulator. With a panel of controls in its mechanical fingers, the PIBOT uses visual information, presented on a computer monitor, to inform its flying. Right now, the concept is limited to piloting simulators, but the researchers hope to have PIBOT actually steer a plane some day.

Triton is a large drone. At 130 feet, it’s wingspan is over twice as long as that of the iconic Predator. It’s much closer to the Air Force’s long-endurance Global Hawk surveillance drone, only outfitted to fly over sea instead of desert. This week, it completed an 11-hour 3,790 mile flight from Palmdale, California, to the southern U.S. border, the Gulf of Mexico and across Florida, before reaching its destination at the Patuxent River naval base. Long-endurance flights over land and water mean that, when adopted by the service, the Triton can watch great swathes of the ocean for anything that looks like a threat to America’s Navy.

Researchers from University California San Diego flew drones with lasers over Mayan ruins in Guatemala. The lasers, a sensing system known as LIDAR, can see through the thick layers of plant life in the jungle, letting researchers find ruins too short to peek over the treetops and plants. The quadcopters, traveling through the air, can also move through the jungle faster than people on foot.

Watch a video of the process below:

Small flying aircraft can get lost. Sometimes there’s a strong, unexpected wind, sometimes pilots are inexperienced, sometimes a ram headbutts you out of the sky. That’s where Screamy comes in. A Kickstarter project with 27 days left, Screamy is a drone alarm that’s about the size of a quarter. When it’s triggered by its owner, it emits a loud sound that can be heard from 1/8th a mile away. The alarm is also open source, making it an appealing addition to hobbyist drones.

In California, a bill to require warrants for some types of government drone use is advancing to the governor’s desk. The bill is a modest step to protect the privacy of citizens, and it’s one of many state proposals to address the challenge of unmanned aircraft before the FAA sets out national rules. California’s bill means that America’s most populous state will soon have guidelines for how to operate drones.

South Africa, meanwhile, is set to announce drone regulations in March 2015. The current policy, which is to fine users for unregulated drone use, was challenged by a group of drone-toting South African businesses, who pointed out that there were no regulations to violate. The South African Civil Aviation Authority agreed, and anticipates releasing some form of regulation next year.