A Look Back At Rosetta’s Best Moments

The spacecraft has orbited a duck-shaped comet since 2014, but now its mission is drawing to a close 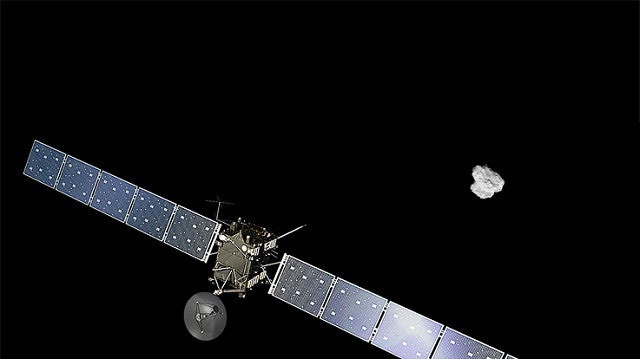 The European Space Agency’s Rosetta spacecraft has had an eventful 12 years. A decade after launching in 2004, Rosetta made history as the first spacecraft to land a probe on a comet (although not without mishaps), and orbit it as it traveled around the Sun.

But Rosetta is finally powering down. On Friday, shortly before 7:00 A.M. ET, Rosetta will plummet to the surface of Comet 67P/Churyumov-Gerasimenko, landing on the smaller “head” of the rubber duck-shaped heap of ice and dust and severing communications with Earth forever. Rosetta will aim for the comet’s active Ma’at region, collecting a final trove of data before the collision.

You can stream the “glorious crash-landing” here.

Rosetta has spent 785 days orbiting the comet since its arrival in August 2014, helping scientists understand where comets come from and the history of our solar system.

“We have gone from considering these comets [as] dusty snowballs to a complex dynamic ‘world’ with a variety of physics to understand,” Matt Taylor, ESA’s Rosetta Project Scientist, said in an email to Popular Science. “This week, we will end the mission operations, but the data will supply decades of work for science, in particular the next generation of scientists.”

Here are some of the most exciting highlights from the two-year mission.

As Rosetta approached Comet 67P/Churyumov-Gerasimenko, ESA scientists were surprised to discover that it was not the football-shaped rock they were expecting. Instead, Comet 67P had two distinct lobes.

“The images faintly remind me of a rubber ducky with a body and a head,” Carsten Güttler, who manages Rosetta’s OSIRIS cameras, said in a press release at the time.

Scientists later determined that Comet 67P’s odd shape is the result of two smaller comets crashing into each other at low speed.

Getting right up in Comet 67P’s business has led researchers to conclude that its two lobes were likely built up slowly, in very cold conditions. In other words, comets are “ancient leftovers” from the solar system’s formation, rather than younger fragments chipped off of larger bodies as they smashed into each other.

Rosetta’s 200-pound Philae lander was supposed to gently touch down on the comet in November 2014. But the probe had a bumpy landing after failing to anchor to the comet’s surface and bouncing away, finally coming to rest in a shaded area where it couldn’t charge its solar panels.

Philae went dark shortly afterwards, hibernating until it briefly awakened in 2015, then went silent again. ESA eventually gave up on hearing from Philae again. Earlier this month, however, Rosetta managed to spy where the probe wound up. This is allowing scientists to better understand the transmissions they did receive from Philae.

Comet 67P, up close and personal

Rosetta and Philae have investigated Comet 67P/Churyumov-Gerasimenko inside and out. Scientists used images of the comet captured by Rosetta’s OSIRIS cameras to map out its varied terrain, which includes cliffs, craters, and grooves.

Before going dark, Philae managed to sniff out organic molecules, carbon-rich compounds that include the building blocks of life on Earth. These kinds of molecules have been detected on Mars and other comets, but Philae allowed scientists to sample them from the surface of a comet for the first time.

Later, scientists found evidence of 16 different organic compounds, four of which had never before been found on a comet. They also learned that parts of the comet’s surface are soft and dusty, others rock-hard. And by sending radio waves through the comet, Philae discovered that its interior is fluffy—that is, loosely packed and full of holes, making for a sponge-like comet that is 85 percent empty space.

It’s likely that water was carried to Earth on asteroids rather than comets, scientists believe after studying Comet 67P. Much of the water on Rosetta’s comet has a different composition than Earth water. It contains deuterium (hydrogen carrying an extra neutron, making it “heavier”), which is rarely found on Earth.

This year, we also learned that the ice on Comet 67P has a crystalline structure, revealing that it is extremely old. It seems to have formed at about the same time as the solar system, 4.6 billion years ago.

There’s plenty of oxygen on the duck-shaped comet. “That was a big surprise,” Taylor told Popular Science. “Oxygen is a friendly molecule and likes to join with other molecules, so having it by itself implies it was trapped very early on in the solar system. This constrains how and where the comet was formed.”

The O2, which Rosetta detected on a comet for the first time, may have become caught in grains of ice and rock trapped as the comet formed billions of years ago.

Voyage towards the sun

Rosetta followed Comet 67P as it approached the sun, which it orbits once every 6.6 years. As the duck-shaped comet heats up, it burns off dust, ice and gases that Rosetta can “taste,” adding to its cloudy halo.

Scientists observed as the restive comet spouted jets and farted an outburst of hydrogen sulfide and methane. Spurts of evaporating ice seem to leave a pockmarked landscape in their wake.