When filming the news becomes news itself 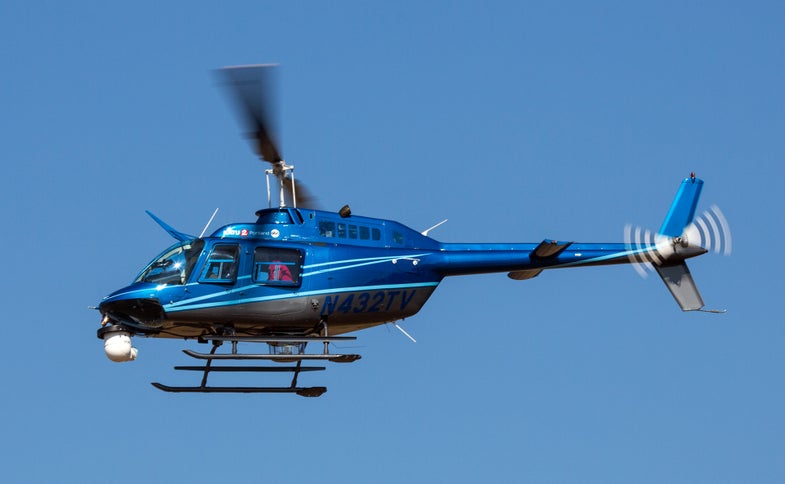 Drones and helicopters are already sharing the same sky. Last Monday, while covering a fire at a salvage yard, a news helicopter from Seattle’s KIRO-TV spotted a drone flying over a different network’s news copter, and then tracked that drone down to its pilot. The helicopter pilot also contacted the FAA about the incident.

This isn’t the first time helicopters and drones have had close encounters, but what’s fascinating is the combined audio and visual from the KIRO-TV cockpit.

At 0:55, the helicopter pilots refer to the unmanned craft as a drone, and shortly thereafter guess the vehicle’s altitude to be 1,500 feet, well above the 500-foot ceiling for drones proposed by the FAA. The drone descends rapidly, hovering just above rooftops, and at 2:12 it buzzes by a person in their backyard. At 3:18 they find the man they suspect to be the pilot.

The rest of the video includes a weird theater of modern surveillance. The helicopter pilots attempt to read the license plate on what they think is the man’s car. Then, the man picks up his drone and returns to a house, all observed in close detail from the sky. This is exactly the kind of tracking people worry about drones doing, but here, it’s done by a powerful news camera in a manned helicopter. At 7:28, one of the helicopter crew resigns himself to letting the pilot “who almost took us out of the sky” get away–which isn’t an unlikely statement. A 2014 study on bird strikes and military helicopters found that birds can cause considerable damage to craft, and noted one anecdote of a bird colliding with an attack helicopter, causing two deaths. While small drones may not cause more harm than birds, it’s possible a drone as large as this quadcopter could have caused a crash.

After a while, the KIRO-TV copter then spends a minute or so filming the salvage fire that was the original draw, before returning at 9:43 to the suspected drone pilot and following him to his house. In the video, the pilot is never identified. The whole event feels like a very low-key remake of Enemy of the State. Watch the chase below: