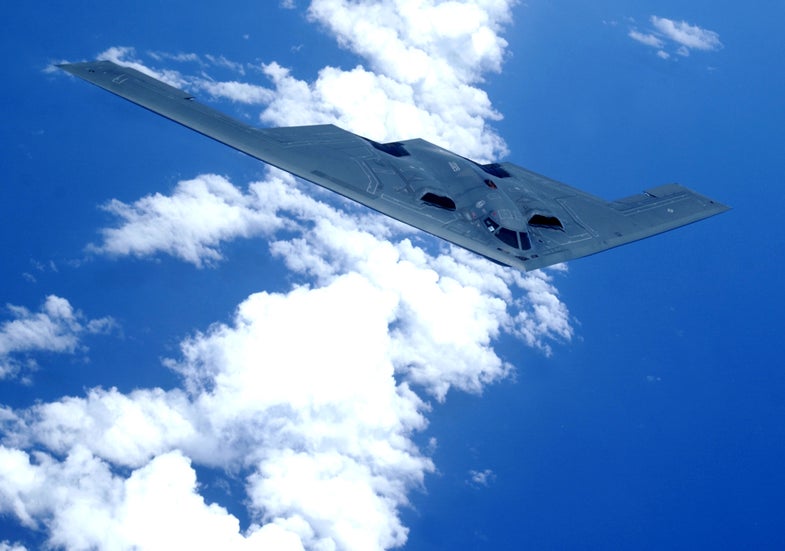 OVER THE PACIFIC OCEAN -- A B-2 Spirit soars through the sky after a refueling mission here May 2. The B-2 is assigned to the 393rd Expeditionary Bomb Squadron at Whiteman Air Force Base, Mo. The bomber is currently deployed to Andersen Air Force Base, Guam, to assist in maintaining a continuous bomber presence in the Asia-Pacific region. (U.S. AIr Force photo by Tech. Sgt. Cecilio Ricardo). Technical Sgt Cecilio Ricardo
SHARE

Stealth aircraft are defined by their smooth edges and deliberate angles. While this provides a sleek aesthetic, it’s not very conducive to re-fueling during flight. Mid-air refueling requires some form of fuel intake valve on the plane for receiving propellant. That can be counterintuitive for stealth aircraft, as a fuel intake valve sticks out on a stealth bomber like a thermal exhaust port on a Death Star.

Well, a video from The Aviationist shows just how it works: The fuel valve flips upside down when finished, leaving only a smooth surface in place.

Why go to such lengths with the bomber? With one mid-air refueling, the B-2 Spirit can fly 11,500 miles. That’s just slightly less than half the circumference of the Earth. So with refueling B-2 bombers can literally fly almost halfway around the world. Until the Air Force’s Long Range Strike Bomber is built, flying extreme distances with deadly payloads is a job for B-2s, and since there are only 20 of them, they need every extra bit of stealthiness they can muster to increase their odds of survival.