Warning: Drones That Appear on News Magazines Are Further Than They Appear 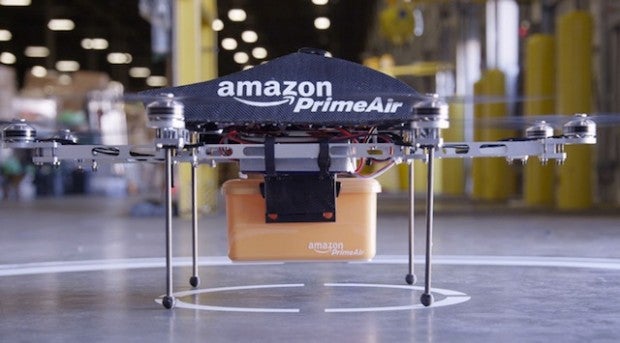 Dogpiles might be unseemly, but with the future of commercial drones currently being determined by the FAA, this kind of publicity deserves a heaping of scorn. On last night’s 60 Minutes, Amazon CEO Jeff Bezos, unveiled Prime Air, a drone-based delivery service that could drop small packages off to customers within a half-hour. According to Bezos, it could happen “as early as 2015,” depending on the FAA’s upcoming regulations.

Some might call that optimistic. The FAA has until September of 2015 to come up with a detailed rundown of how it plans to regulate the safe operation of drones in commercial American airspace. Don’t try to parse that last sentence—it’s intentionally circuitous, because the FAA doesn’t want to commit to actual regulations or deployment of commercial drones by 2015. It’s a relatively hollow deadline, and the agency won’t be pinned down on what sort of unmanned aerial systems (UAS) will be in the air by the end of 2015 (trust me, we’ve tried).

But the experts we’ve talked to, whose livelihood revolves around the planned rollout of commercial flying robots, have come to a relatively universal census: the first wave of commercially-operated drones will be little more than remote-control aircraft.

Specifically, the FAA is expected to initially certify and approve the use of small UAS under three conditions: they must fly in daylight, they must stay below 400 feet, and they must remain within line-of-sight of a human operator at all times.

Those requirements aren’t written in stone, or officially confirmed. They’re received wisdom, based not on leaked reports but run-of-the-mill industry scuttlebutt. Low-flying, line-of-sight drone operation is an expectation shared by the likes of Michael Toscano, president and CEO of the Association of Unmanned Vehicle Systems International (AUVSI), a non-profit organization that promotes the development of UAS. Toscano characterizes a 2015 deployment of Prime Air as a “phenomenally optimistic timeframe,” due largely to the FAA’s priority on safety, as well as the general need to address privacy concerns. “By 2015, we’ll be going after the low-hanging fruit, such as precision agriculture,” says Toscano, referring to one of the more established usage cases for commercial drones, as low-cost airborne crop monitors. “When you’re in the middle of thousands of acres of fields, there are no human beings, and no privacy issues.”

Here, then, is what Prime Air might look like in 2015, assuming Amazon is extremely lucky in its certifications.

The delivery request comes in, and the drone pilot gets ready to move. He can’t lounge in a central command center, joysticking the octocopter over city streets to its destination. He needs constant, visual line-of-sight. So maybe he’s peering up at the machine from the open top of a convertible. He certainly isn’t driving, so he’s riding shotgun, head craned toward the sky. Better yet, perhaps he’s in a sidecar? Whatever his mode of transportation, he is leashed, essentially, to that aerial robot, unable to break contact as it buzzes over and through urban canyons. When it sets down its cargo, he’s eyeballing it still. Like a concerned parent surreptitiously following a child’s first unattended walk to school, the human is the robot’s faithful guardian.

If you’re wondering why this 2015-era Amazon drone pilot doesn’t simply cut out the mechanical middle man, and hand-deliver the package in question, here’s the thing: Prime Air is not happening by 2015. The FAA isn’t going to throw up its collective hands and allow Amazon to do as it pleaes, operating autonomously over crowded streets within the next two years. Regulations don’t leap into the future, in advance of technological capacities. They crawl forward, always lagging behind what’s technically possible. And Jeff Bezos knows better, or should—he’s one of a trio of software wunderkinds, along with Elon Musk and John Carmack, who’ve sunk their riches into the unforgiving world of rocket science, and worked with the FAA to receive flight clearances. As founder and CEO of Blue Origin, which has tested and flown (in a limited capacity) would-be spacecraft, this isn’t Bezos’s first midair rodeo.

In that same 60 Minutes segment, Bezos mentions that Prime Air might wind up happening in 4 or 5 years. That’s entirely possible, pending evolving FAA safety regulations. By 2018, private drones—not to be confused with the hundreds of law enforcement or research-oriented models already approved on a case-by-case basis by the FAA—could be relatively commonplace. And AUVSI’s Toscano applauds Bezos for making commercial drones seem like a tangible future. “Now, the average person in the street realizes this is in the realm of possibility,” says Toscano. “The seeds have been planted. The question is when, and to what capacity?”

I agree that Bezos has kickstarted the process of educating the public regarding the very real, and very transformative onset of commercial UAS. But to start that conversation with a complete disregard for regulatory realities, pretending that autonomous, self-guided robots will be populating our airspace by 2015, is a troubling piece of marketing. If Bezos is hoping to socially engineer the FAA into collapsing its expected timetable, that’s just as troubling, if not moreso.

Whatever Bezos is doing, perhaps he did it too soon, and planted a false flag in 2015, to manufacture relevance and affix Amazon’s brand to the wider, ongoing commercial drone discussion.

But if you want the public to accept robots into their lives, don’t start with a lie.