Watch A Robot Ride A Hovercycle 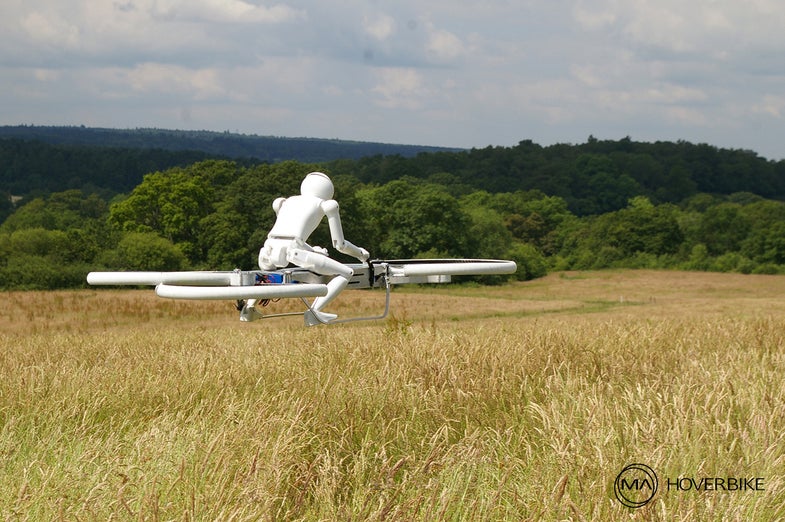 A white plastic robot zooms a hoverbike over the English countryside, grains blowing beneath the bike’s four fans. The robot’s 3-D printed body is lightweight, and where its face would be there’s a GoPro camera instead, filming the flight. This isn’t a scene from a dystopian science fiction movie; The bike is less than four feet long, and combined robot and bike weighs a maximum of 15.4 pounds. Created by Malloy Aeronautics, the Drone 3 hoverbike is a 1/3rd scale model of the version ultimately intended for human pilots and passengers.

The hoverbike is available as a reward for Kickstarter backers pledging just shy of $1000 USD. The campaign, which concludes on August 31st has already surpassed its goal. Making and selling Drone 3 is just the first part of the plan for Malloy Aeronautics. The company, founded in Australia and transplanted to England, envisions hoverbikes using the sky alongside helicopters the same way cars and motorcycles share the same roads. In particular, and in strikingly Australian fashion, the hoverbike makers say it could be used for “one man operational areas like cattle mustering and survey,” replacing the more conventional helicopters that presently perform this role.

Malloy Aeronautics’s first hoverbike used two large ducted fans for lift, something it had in common with other hoverbike designs. The new version, as seen in Drone 3, is instead a quadcopter, using four rotors in a sleeker, more balanced fashion. The fans partially overlap, and the whole drone can fold up to fit within a special backpack carrying case. Drone 3 is remotely piloted, but the hoverbikes it finances will fly both manned and unmanned.

Watch it in flight below: