The Navy Is Making A Flying, Swimming, Submarine-Hunting Duck Drone 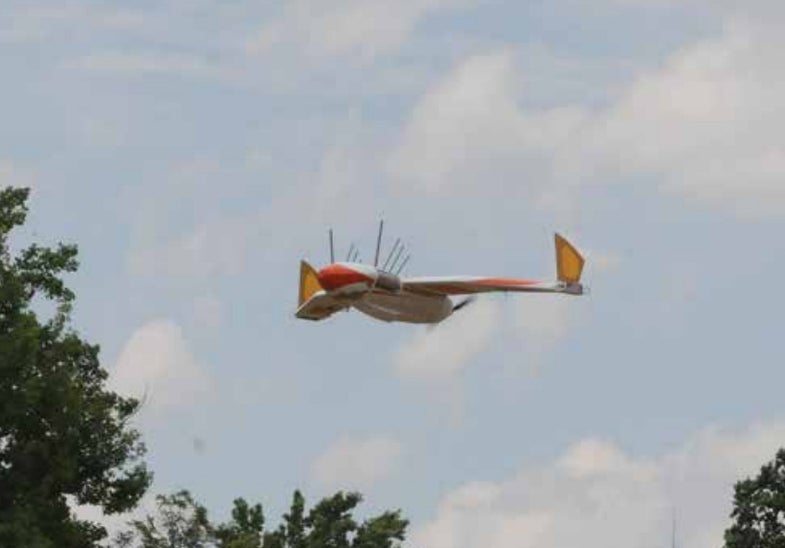 The fastest way to move a submarine is through the air. At least, that’s the logic behind “Flimmer,” a new flying and swimming duck drone currently in development by the Naval Research Laboratory. Profiled in the winter issue of Spectra, the NRL’s magazine, Flimmer may go beyond a weird name and become a powerful submarine-tracking tool.

While it might be inspired by a duck, Flimmer certainly isn’t built like one. It has fins hidden on the ends of its wings, like a cubist’s suggestion of what duck-ness might really be. In flight, these fins fold upwards to stabilize the craft, and a pusher propeller at the back of the Flimmer provides thrust. In the water, the rear fins, as well as a second pair further up the body, steer the robot. Flimmer can not only fly through the air and swim, but it can make the transition between the two easily. On smooth seas, it can land like a seaplane, but for rougher conditions where that’s not possible, Flimmer will dive into the water like a duck.

The latest version of Flimmer is an aerodynamic fish called the Flying WANDA. (WANDA comes from the Navy’s fish-mimicking “Wrasse-inspired Agile Near-shore Deformable-fin Automaton,” and, presumably, is named after a 1988 John Cleese film). In tests, WANDA could go as fast as 57 miles per hour while flying, and just 11 miles per hour in the water.

The Naval Research Lab only hints at future submarine-hunting plans for the Flimmer, conceptualizing the design as a more mobile and a re-deployable sonobuoy. Sonobuoys are, like the name suggests, sonor-carrying buoys, usually dropped from planes to scan an area for submarines. Once deployed, they’re static devices. While they can communicate their findings back to human operators, sonobuoys just sort of float where they are. If they detect a submarine and then it goes away, there’s not much a sonobuoy can do. But a Flimmer, with sonar mounted in its belly, could move around to keep looking for the submarine.

Not bad, for a duckbot.