A drone pilot’s nightmare came true when operators lost control of an armed MQ-9 Reaper flying a combat mission over... 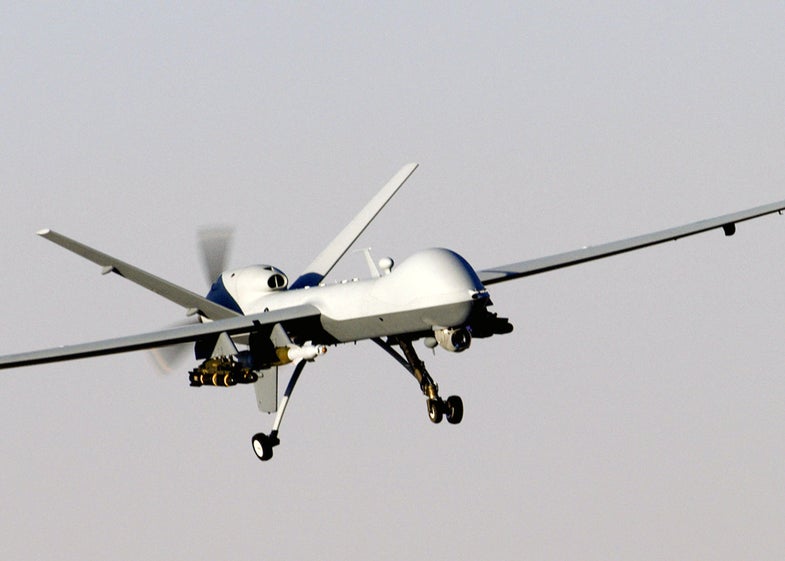 An MQ-9 Reaper unmanned aircraft prepares to land after a mission in support of Operation Enduring Freedom in Afghanistan. The Reaper has the ability to carry both precision-guided bombs and air-to-ground missiles. (U.S. Air Force photo/Staff Sgt. Brian Ferguson). SSgt Brian Ferguson
SHARE

A drone pilot’s nightmare came true when operators lost control of an armed MQ-9 Reaper flying a combat mission over Afghanistan on Sunday. That led a manned U.S. aircraft to shoot down the unresponsive drone before it flew beyond the edge of Afghanistan airspace.

The U.S. Air Force stated that a manned aircraft took “proactive measures” to shoot down the Reaper, which ended up crashing into the side of a mountain. Reaper drones have typically engaged in hunter-killer missions over Iraq, Afghanistan and Pakistan by targeting enemies on the ground with Hellfire missiles.

More than one drone has fallen out of the sky over the past few days. Aviation Weekly noted that a smaller MQ-1 Predator crashed on September 11 at Creech Air Force Base in Nevada, and another Predator just crashed today in Iraq for reasons other than hostile fire.

But the Reaper incident in particular raises questions about the backup control systems over unmanned aerial systems, and what steps are available to prevent drones from falling into enemy hands when they go rogue.

Both the Reaper and Predator have a “zero out” function that permits operators to wipe their data remotely. Still, that might not work if the link between operator and drone goes dead.

Such “lost link” incidents actually represent common troubles for the two drone types. Predator pilots constantly update a set pattern for their drones, so that the plane will loiter in that pattern if it loses communication with its operator (which happens frequently). The drones are even programmed to automatically head toward home to reestablish contact if the link remains dead for too long.

If communications cannot be restored and the failsafe measures fail (as they appear to have here), current drones lack remote-kill or self-destruct mechanisms. Prior crashes or incidents have required ground forces to secure the area, or manned aircraft to destroy the damaged asset.

These issues have special relevance for today’s U.S. Air Force, which has scrambled to reinvent itself and train thousands of pilots to keep up with the demand for unmanned missions. We’re still far from fearing self-aware drones or machines running amok, but a “dumb” drone without adequate human control represents no less a worry for commanders.