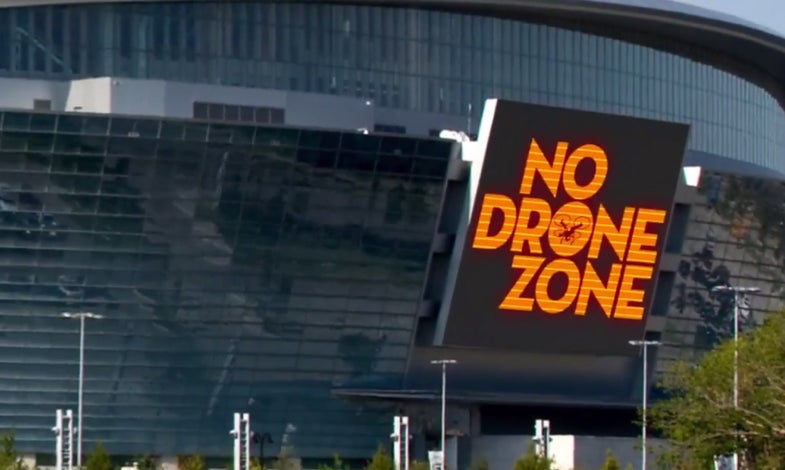 Every day, people find new places where they shouldn’t fly drones. Earlier this week, it was the White House grounds. Before that, a meth-smuggling remote control copter crashed just south of San Diego. There are even maps of where not to fly drones. Now, in a new, short PSA, the Federal Aviation Administration very clearly says where not to fly: the Super Bowl

With “No Drone Zone” signs superimposed on the field and in lights outside the stadium, the message couldn’t be clearer. And it’s not entirely unwarranted. People are using drones to film more and more sporting events, and while the NFL has an overhead camera system already in place, drones offer cheap aerial coverage for less-well-financed college and high school programs. Not to mention your average superfan. Last year, British police arrested a man for flying a drone over a Manchester City versus Tottenham Hotspurs soccer match. There’s a safety concern with drones flying over crowds, but sporting events also have strict rules regarding filming and copyright, so that’s probably at play here too.

Drones also offer a lot for an individual who wants to disrupt a game without running onto the field. In October, a drone carried a provocative flag over a soccer match between Serbia and Albania. To avoid that, the FAA launched the video above, complete with the Twitter-friendly #NoDroneZone hashtag.

Besides legal prohibitions on drone use at sporting events, there might be technological prohibitions in the future. After the drone that crashed on the White House lawn was revealed to be a DJI Phantom 2, the company said that a future firmware update for the drones would prevent them from flying within a 15.5-mile radius of Washington D.C.