The Week In Drones: The Sound Of Stealth, Clearing The Robot Smog, And More 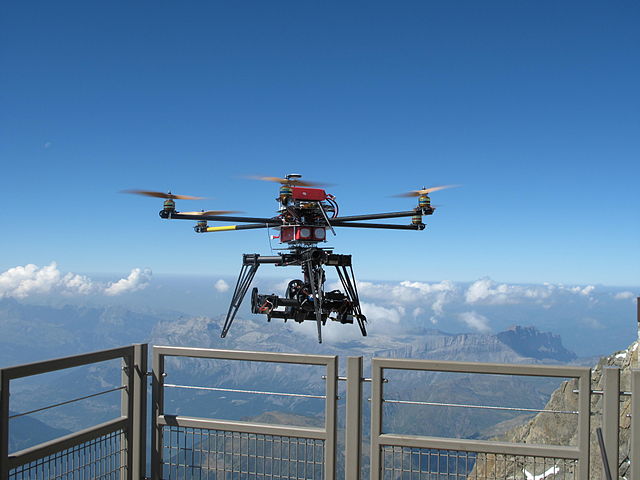 Lakemaid Beer, a brewery in Stevens Point, Wis., used a hexarotor drone to carry beer to some ice fishermen. It’s probably just an advertising gimmick, but, seriously, this should be a real, ongoing service. Niche delivery like this, from a central hub to remote clientele, is exactly the kind of delivery drones should do. **UPDATE: **The FAA has said “not yet” to the beer drone, and they’ve ordered Lakemaid to stop. According to Lakemaid president Jack Supple “They think it’s a great idea, though they’re telling me to stop.” Ice lake beer delivery is still more of a future concept anyway. According to Supple the beer case as depicted in the video below isn’t full, as the weight was just too heavy for the drone, and the delivery-by-coordinates is a fiction, too. A human pilot operated the drone, so beer delivery is both legally and technologically a thing of the future.

On Wednesday, California’s assembly passed a law limiting drones in the Golden State. The law requires public agencies to delete the information collected by drones within six months and requires law enforcement to obtain warrants for drone use for everything except “to assess the necessity of first responders in situations relating to traffic accidents, to inspect state parks and wilderness areas for illegal vegetation, or fires.” It also legally prohibits people and agencies from attaching weapons to drones. This is a major step in making sure drone users respect privacy, and it will be interesting to see how this local legislation meshes with federal rules.

A team from the University of Bristol is offering a six-rotor drone to search for radiation around the leaking Fukushima reactor site in Japan. The drone is an alternative to flying manned helicopters near the disaster site, which would be dangerous for the human pilots. Even if officials decide not to use the drone, the Bristol team hopes to make it commercially available by the end of next year.

Photography, Only for Non-Professionals

Drones have a lot to offer architects and real estate agents, as they provide the cheapest and fastest way to get aerial footage of a new building or a potential build site. There’s a snag, though: the FAA, which regulates commercial air traffic in the United States and only recently authorized six states as designated test sites, doesn’t yet approve of commercial use of drones. This is especially frustrating for journalists, who, by the very nature of their work, publicize when they use drones against the wishes of the FAA.

The Sound of Stealth

The video below, a presentation by photographer and activist Trevor Paglen, includes at 22:48 the sight and sound of an RQ-170 stealth drone in flight. It sounds about as alien as it looks.