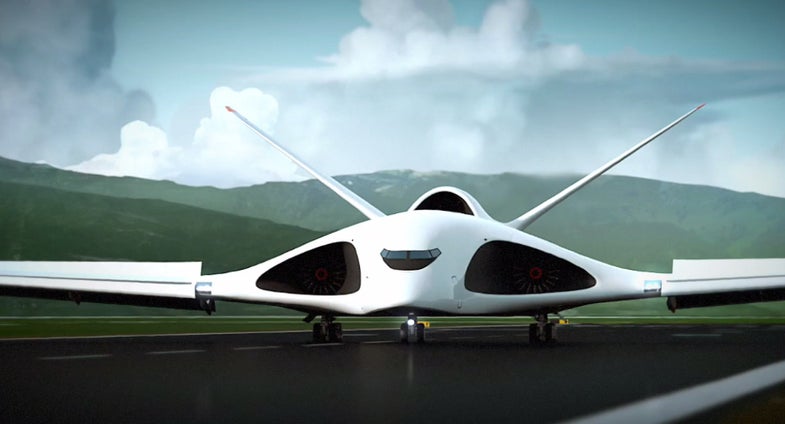 A face only a Cylon could love. Screenshot by author, from Vimeo
SHARE

Never mind the fact that Russian-backed separatists in Ukraine are struggling to win a civil war–the Kremlin wants to wow the Future with a gigantic supersonic cargo plane. Named the PAK TA, the concept from Russia’s Military-Industrial Commission will be a supersonic transport than can deliver Russian troops and tanks at high speed across the globe. And, according to Russia’s state-owned network, RT, they want them ready for military service by 2024.

The concept is as ambitious as it is improbable. Inside, Russia wants it to fit at least seven future tanks (also still in development), and then carry them through the sky at supersonic speeds of over 1200 mph to destinations up to 4000 miles away. That’s a speed unheard of for transports, and surpassed only by fighter jets. The F-22 Raptor, America’s fighter, maxes out at around 1500 mph. The C-5M Super Galaxy, America’s largest military transport plane, tops out at 518 mph. The PAK TA’s planned 200-ton capacity will enable it to carry one or two more tanks than the Super Galaxy, with the full planned fleet of 80 PAK TA’s capable of lifting at least 400 tanks to anywhere with a runway that can accommodate 80 gigantic cargo planes.

Making the PAK TA even more improbable is how it plans to fly: as a hybrid-electric airplane. Electric airplanes are rare today, and they often take the form of early concepts for luxury vehicles or NASA concepts. While improved batteries and electric engines mean all-electric airplanes are possible, it’s still unlikely we’ll see any military adopt a largely electric plane, much less a supersonic one, within the net decade.

All of this means the PAK TA is more likely a flight of fancy than a fancy flier. Watch a video of the plane below: