The Cat May Have Been Domesticated Two Separate Times 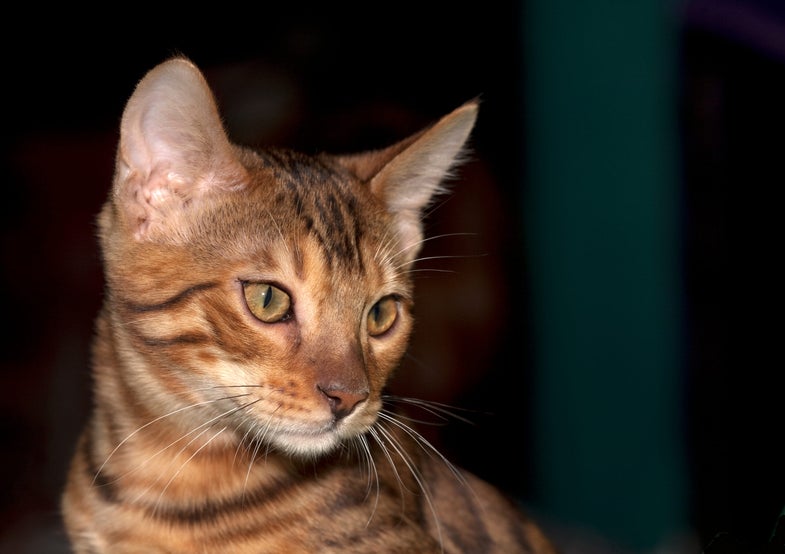 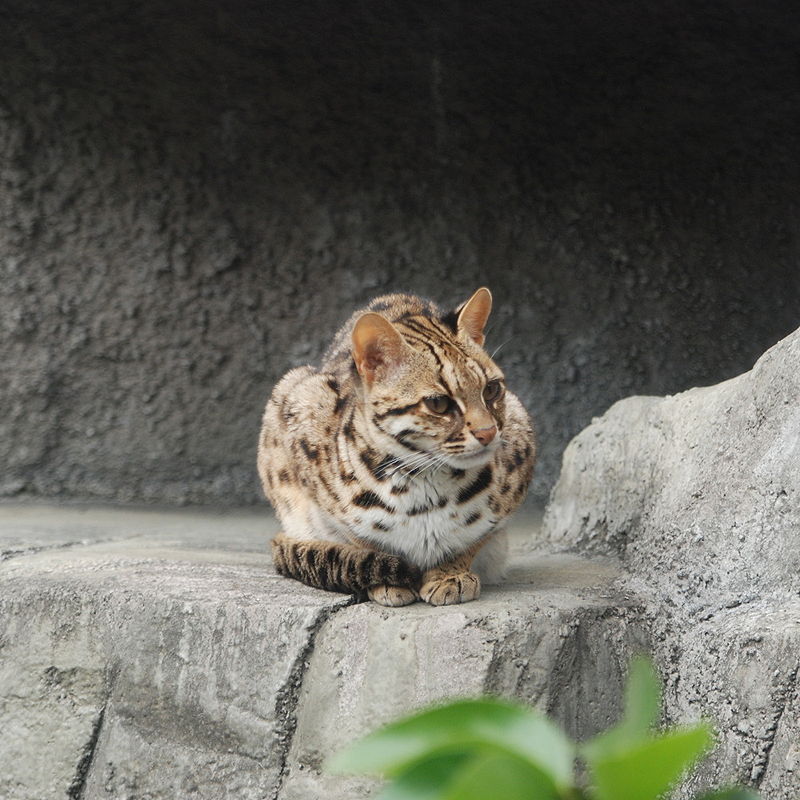 New research shows that cats were likely domesticated a second time and from a different species—the leopard cat.

There are more than 500 million domestic cats (Felis catus) worldwide. Their grip on the globe is tangible, too. For anyone who has spent any amount of time wasting away on the internet, they’ll know it’s awash in cat videos and memes. Millennia ago, just as we do now, Egyptians depicted cats on walls and worshipped them as gods. Yet, it wasn’t always so.

Scientists know for certain that all domestic cats are descended from the North African and Near Eastern subspecies of wildcat Felis silvestris lybica, and recent evidence has shown that this domestication occurred probably 10,800 years ago near the Middle East. But new findings suggest that cats were likely domesticated twice–the second time some 5,000 years ago in China, when an altogether different species of wildcat was brought into a then catless human community. This puts cats in the company of pigs and dogs on the short list of animals whose domestication occurred more than once. The findings are published in the science journal PLOS One.

Cats, perhaps not surprisingly, largely domesticated themselves. This likely happened in concert with the Neolithic revolution and the advent of agriculture. Large fields and stores of grains meant large numbers of mice and rats. And humans, of course, did not object to having helpful hunters around to protect their crops. So they started taking care of the felines to make sure they stayed around—and to increase their numbers for the war on rodents. Cats’ presence around humans is well documented in Ancient Egypt, but it is believed domestication was well on its way before then, with cat remains found associated with human burial sites in Cyprus from as early as 10,800 years ago. 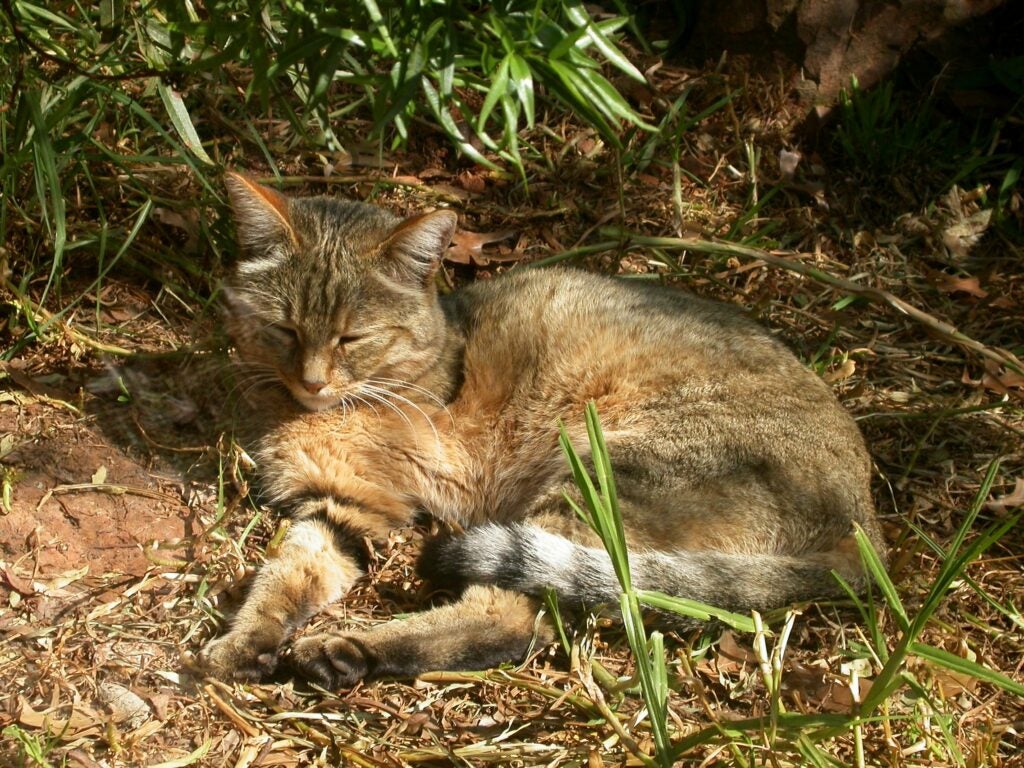 The near eastern wildcat, the subspecies of wildcat from which all modern domestic cats are descended.

Added to this evidence of early domestication was the recent discovery of smallish cat bones at several Neolithic sites in Northern China. These cat bones showed the telltale signs of domestication: small size, worn teeth indicative of being fed by humans, and even a whole skeleton suggesting that an ancient feline was given an intentional burial. Zooarchaeologists initially thought these must be the remains of Western domestic cats transported to the region, but the newest spate of findings show these bones were from a wholly separate species of wildcat, the leopard cat (Prionailurus bengalensis)–and thus an entirely novel incident of domestication.

Jean-Denis Vigne, the director of research from the French National Centre for Scientific Research in Paris and a team of international researchers analyzed felid bones collected from the Neolithic sites in China. Using a particular technique known as geometric morphometric analysis—taking thousands of digital measurements to compare and contrast bones—they determined that all of the bones unearthed in China were indeed from the leopard cat, native to Central Asia. This means that wildcats were, in fact, domesticated once in the Middle East/North Africa region, about 10,800 years ago, and again, from a different species in China approximately 5,000 years later. 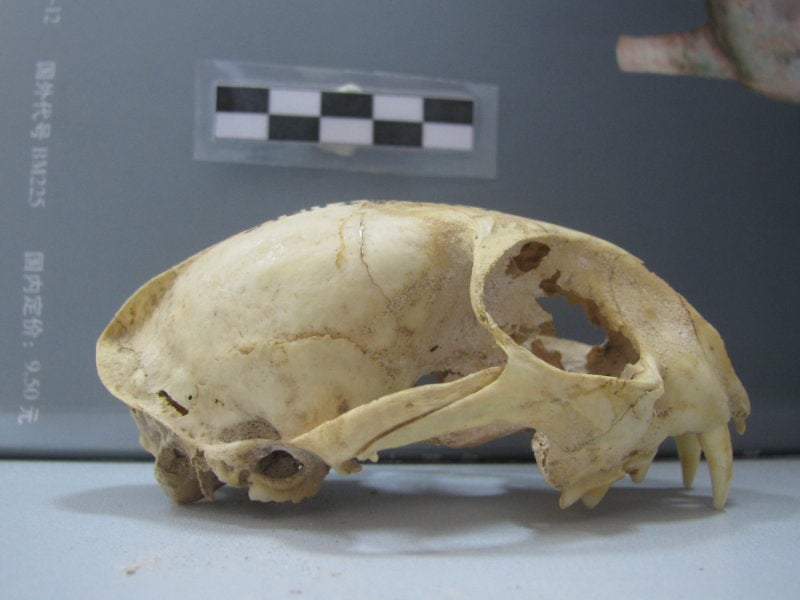 A domestic cat skull from a Neolithic site in China

Vigne notes that leopard cats can easily be bred in captivity and that the physical condition and nature of their deposition—particularly the full skeleton burial—strongly indicate these spotted felines were on the path to domestication. “Individually, these [findings] make a weak argument, but altogether they are strong.”

Vigne also explains that if cats—which largely domesticated themselves—were indeed to have undergone this process twice, it could mean that a wide array of animals may have become domesticated with less human involvement than previously thought. “Contrary to what was thought 40 years ago, domestication does not result from the unique decision of humans,” he says, but starts with “a specially strong ecological interaction between a species and humans.”

This brings up another question, however. What happened to the domestic leopard cat of China? Genetic analysis of modern domestic cats, including those in contemporary China, shows that they are not descended from leopard cats. So what happened? Perhaps the opening of the Silk Road and trade between East and West ended the leopard kitty’s bid for domestication. “Maybe it was more in ‘fashion’ to have a cat coming from more ‘exotic’ countries?” speculates Vigne. It’s still a mystery.

Despite millennia of silence, it has, in a way, made its meow heard in households once again, in the form of the Bengal domestic cat, a breed created in the 1960s, which is a cross between a standard domestic cat and a leopard cat.

Update 1/28/2016: This article was updated with quotes from a later interview.