Good news! We’re probably not living in a computer simulation. 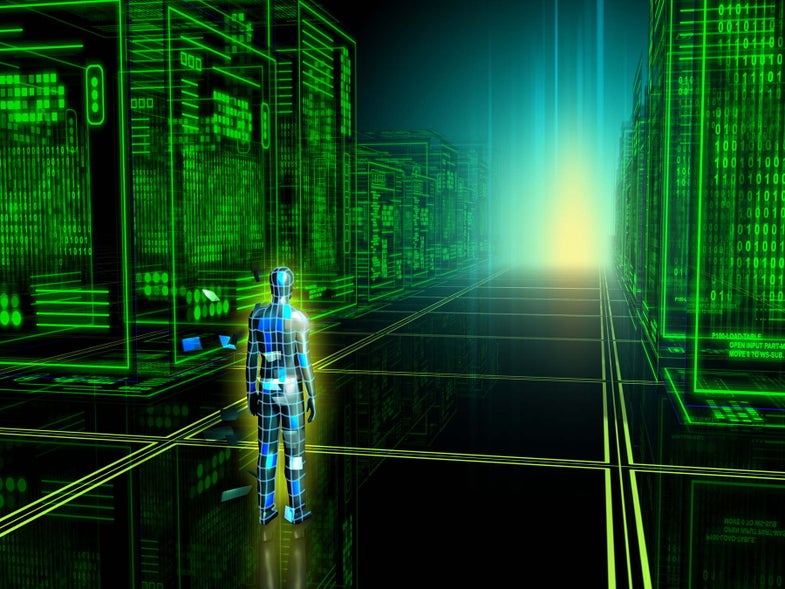 From Star Trek: The Next Generation’s “Ship in a Bottle” episode, to the eponymously named computer system in the movie The Matrix, the idea that life is little more than a computer simulation has served as a sci-fi standby for generations. But that technological twist on the idea that life might just be a dream can’t possibly be true. Right?

Well, what if it is? What if this life is just a simulation of the real thing? What if you, in an incredibly meta act, are reading this on a computer while residing inside of a computer? Once inserted, the thought niggles away at us—we can’t think our way out of this quagmire. “What if you were unable to wake from that dream? How would you know the difference between the dream world and the real world?” asks Morpheus in The Matrix. Dude.

But now researchers say they’ve sussed out the whole situation for us. Theoretical physicists Zohar Ringel and Dmitry Korvizhini, who are based at Racah Institute of Physics Hebrew University in Israel and Oxford University in the United Kingdom, claim to prove the concreteness of our reality in a recent Scientific Advances study.

To understand what they found, it helps to first recognize what a computer is: it’s essentially a machine that performs calculations. In order for a computer to simulate reality, then, the machine would need to have enough power to actually create the phenomena that we experience within its simulated environment. What the researchers discovered, however, is that storing the information required to simulate certain behaviors of even a couple hundred electrons would take more atoms than exist in the universe. For better or for worse, this world is real. Probably.

The researchers didn’t set out to disprove the central plot of your favorite Doctor Who episode. That was an accident. Kovrizhi and Ringel were trying to see if they could use a mathematical method to model systems that display anomalies (the stuff that always gets Star Trek ships into trouble) like those of the quantum Hall effect. The regular Hall effect (normally just called the Hall effect) explains how, under the right circumstances, metals can display some interesting electrical behaviors. For example, if you take a a metal bar and send a current flowing through it, you expect electrons to keep moving straight ahead in the direction of the current. But when you apply a magnetic field perpendicularly to the current, the Hall effect predicts that the electrons will turn and start moving perpendicularly to both the current’s original direction and the magnetic field. The quantum Hall effect takes the standard Hall even further: when you take conductive material into an environment that’s both very cold (near Absolute Zero, or -459.67 F), and has a strong magnetic field, particles behave even more oddly. Kovrizhi and Ringel were trying to get a better grasp on why.

Two plus two is pretty easy to solve (the answer, in case you’re wondering, is four). These sorts of equations are fine for relatively simple systems—we can do them with a calculator, if not in our minds. But these kinds of easy calculations start to break down when dealing with the weird quantum behavior that occurs at the very very small (we’re talking about systems smaller than the goings on of individual atoms) level. There are more unknowns—and you can have an infinite number of particles interacting. That’s what is known as the many body problem.

“When you do physics and you don’t know how to solve something, you say, maybe I can just have my computer solve it for me and that will give me some intuition,” Ringel told Popular Science. So he and his colleague turned to quantum Monte Carlo, a family of computational methods that use random sampling to study complex quantum systems that can’t be solved directly. But the researchers discovered that for every particle they added to the system, the simulation became exponentially more complex. It essentially doubled in complexity with each new particle (not unlike the reproductive rate of a tribble), making the problem unresolvable.

It’s not that people hadn’t attempted to solve for quantum Hall before. People have tried solving it using laptops, and big clusters of computers. Ringel and Kovirzhi didn’t necessarily expect to succeed, but they hoped to figure out why it had never been done. It could be that humans aren’t smart enough, or that physicists just haven’t yet found the right mathematical mapping. The new study makes it clear that it’s just not possible to simulate the effect. And to the study authors, that suggests it would be impossible for a computer to create our world.

There are of course, some caveats.

First, this presumes that the physical laws of the universe in which our not-so-benevolent overlords are operating mirror those found within the simulated fortress we call home. That might seem like a big presumption. But ask any special effects crew; it’s really hard to build a world, and even harder to have it make physical sense. The route of least resistance would be to model a fake world after the real thing.

The study also assumes that any potential puppet masters are using computers as we know them. “If they somehow know how to run quantum computers, that completely dissolves our claims,” says Ringel. Classical computers, like the kind you’re probably reading this on, treat electrons as particles. Quantum computers treat electrons as probabilities that are best conceived of as waves—the electron isn’t in one place but in many places at the same time. “Quantum computers can solve certain problems that regular computers can’t,” says Ringel. “You can factor very large numbers and break all of the standard encryption techniques that we have today. But nobody has ever built a quantum computer and shown that it does that.” Or nobody inside our reality, anyway.

This isn’t the only quantum interaction for which predictive algorithms haven’t yet been found. This paper suggests that they may never be uncovered, putting a kibosh on the idea that reality could be an elaborate game of The Sims. Absent a fundamental reworking of our universe, the world is probably the real world. Unless, of course, it’s just a dream.