How the Air Force planned to put men on the moon

Just months after Sputnik's launch, the USAF had a manned lunar landing program all figured out. 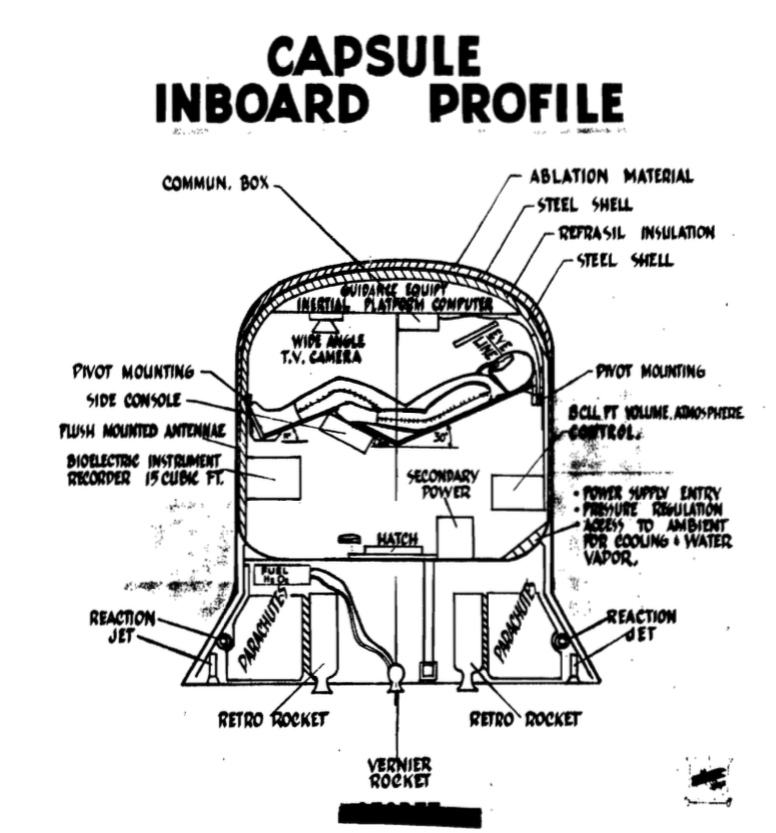 Note: This story, published in 2015, is being re-promoted as part of our #sputnik60 celebration of the planet’s first artificial satellites, Sputnik 1 and 2. For the month of October 2017, we will be resurfacing cool stories about the Space Race.

In the spring of 1958, after President Dwight Eisenhower called to create a civilian space agency, the US Air Force assumed it would lead any national spaceflight effort. As such, the service prepared a detailed, multi-stage plan called Man in Space with the goal of landing a man on the Moon by the mid 1960s.

The first phase of the Man in Space program was a technical demonstration phase called Man in Space Soonest (MISS). This phase would take the first steps in space to understand the human factors involved. The first six flights would be robotic missions designed to test the hardware and flight systems, followed by six animal flights over six months to test the live support system. Once everything was proven, a man would launch, ideally as early as October of 1960. These manned flights would round out the technical needs for the MISS phase by developing reentry and recovery techniques.

As though to compliment the simple goals of the MISS phase, the spacecraft for all stages was very basic. It was expected to be a simple high-drag, zero-lift, blunt-nosed cylinder eight feet in diameter with a flared bottom and an ablative heat shield to protect the passenger from the heat of reentry. The flared skirt would house the reaction control jets for in-orbit attitude control, the retrorockets that would start the spacecraft on its reentry path to Earth, and the recovery parachutes for a splashdown at sea. Throughout the mission, the pilot would lie on his back on a couch, and though it would be pressurized he would still wear a pressure suit as an extra safety measure. Alongside the pilot would be a certain amount of instrumentation, including the main guidance and control systems as well as the secondary power pack, telemetry and voice communications system.

MISS was intended to solve the key unknowns of human spaceflight, keeping the man out of the loop for his own safety; no one wanted to risk a human pilot in case it turned out that weightlessness was debilitatingly disorienting. The pilot would have increased control in later flights, but real pilot control wouldn’t come until the second phase of the program, Man in Space Sophisticated (MISSOPH).

Beginning in March of 1961, the first stage of this phase, MISSOPH I, would send robotic and animal flights in larger spacecraft designed to stay aloft for up to two weeks, the average time it would take to fly to the Moon and back. This spacecraft would be more or less a larger version of the MISS spacecraft but with an airlock to facilitate spacewalks. The second stage, MISSOPH II, would take advantage of the larger Super Titan Fluorine booster to launch to extremely high altitudes. The goal would be to get the spacecraft as far as 40,000 miles from the Earth so that when it returned it would reenter the atmosphere at about 35,000 feet per second, roughly the same speed as a spacecraft returning from the Moon. The third stage, MISSOPH III, would be the first to give the pilot a lot of control owing to its radical new shape. Unlike the blunt vehicles before it, MISSOPH III would feature a flat triangular bottom reminiscent of a boost-glide vehicle so the pilot could make smooth, gliding landings on a runway.

The MISSOPH III spacecraft would live beyond its dedicated stage, facilitating both Earth orbital and lunar missions, but not before the third Lunar Reconnaissance (LUREC) phase of the program flew. LUREC was intended to fly simultaneously with the MISSOPH phase beginning April of 1960. The first stage called LUREC I was devoted to figuring out the details of real-time tracking and communications with a spacecraft a quarter of a million miles from home. Once the tracking system was in place, LUREC II missions could launch on flights to test the guidance system that would get a spacecraft to the right target a quarter of a million miles away. Using an array of scientific instruments, these unmanned vehicles would also measure the temperature, radioactivity, and atmospheric density around the Moon, sending back television images at the same time to help mission planners narrow down safe landing sites.

With a better understanding of the lunar environment, LUREC III would be the first stage to attempt a soft landing on the Moon. The spacecraft would use retro-rockets to slow its descent and telescoping legs to cushion the impact. Staying intact was important; having landed, this spacecraft would gather the first in situ data about the Moon’s surface, including seismic and audio data from ground noises.

Building off lessons learned to this point, the final flight phase, Manned Lunar Flight (LUMAN), would be the one to land men on the Moon’s surface. The first stage, LUMAN I, called for circumlunar animal flights as early as May of 1962 to verify the hardware, computer, and life support systems. LUMAN II would fly the same mission but with human pilots on board. LUMAN III would resume unmanned flight, soft landing a payload on the Moon. In the LUMAN IV stage, that same spacecraft would land on, then launch from the Moon’s surface before returning safely to Earth ideally early in 1963.

At that point, everything would be in place for a manned lunar landing, the goal of the LUMAN V stage. On this mission, one pilot would bring his spacecraft to a soft landing on the lunar surface. Once there, he would leave the spacecraft through the airlock and, thanks to his special pressure suit, be free to explore the surface. He’d get back into his spacecraft for the return flight home and, upon his return, complete the program’s main goal sometime around 1965. Subsequent missions would focus on larger scientific and military goals; LUMAN VI and LUMAN VII would see more complex landed and orbital missions resepctively with far more sophisticated science instruments.

When it was pitched in 1958, this Man in Space program was projected to cost $1.5 billion from the first unmanned missions through to the LUMAN missions. But success hinged on a few things, namely getting priority status and the freedom to take control over whatever resources the Air Force might need to get missions flying as soon as possible. And it needed to get that priority status by July 1, 1958, to stay on schedule; the date was just months after the proposal was written.

Though it pushed improved reconnaissance, communications, and early warning systems for protection against enemy attacks as valuable spinoffs, the Air Force’s proposal was deemed too lofty. It was scaled back to focus on the Man in Space Soonest phase that could be done quickly and before taking on something as challenging as a lunar mission, which suited the service just fine. Besides, there was little question for the Air Force that it would lead the way in space. It looked at the X-15 program as a model, the joint USAF-NACA (National Advisory Committee for Aeronautics) program that had the NACA doing the bulk of the detailed engineering work and the USAF pilots getting the glory of flying record-breaking flights. Why would spaceflight be any different?

Sadly for the Air Force, President Eisenhower’s decision to found a civilian space agency — NASA — preempted any military program. A year later, NASA’s Mercury program was under development with seven astronauts already selected to fly its missions. The Air Force’s involvement in the program was minimal, supplying Atlas rockets and ground support while the new agency’s astronauts became national heroes.

I tell the story of the Air Force’s earliest space programs, including Man in Space, in my book, Breaking the Chains of Gravity, which is in stores in the UK now and will be released in the US on January 12, 2016. You can (pre)order it on Amazon or buy a signed hardcover copy on my website, though my shipping is slower than Amazon’s! Sources: USAF Man in Space proposal. This article was edited from work that appears in my book, Breaking the Chains of Gravity.