60 years ago, Sputnik shocked the world and started the space race

Here’s how it all began. 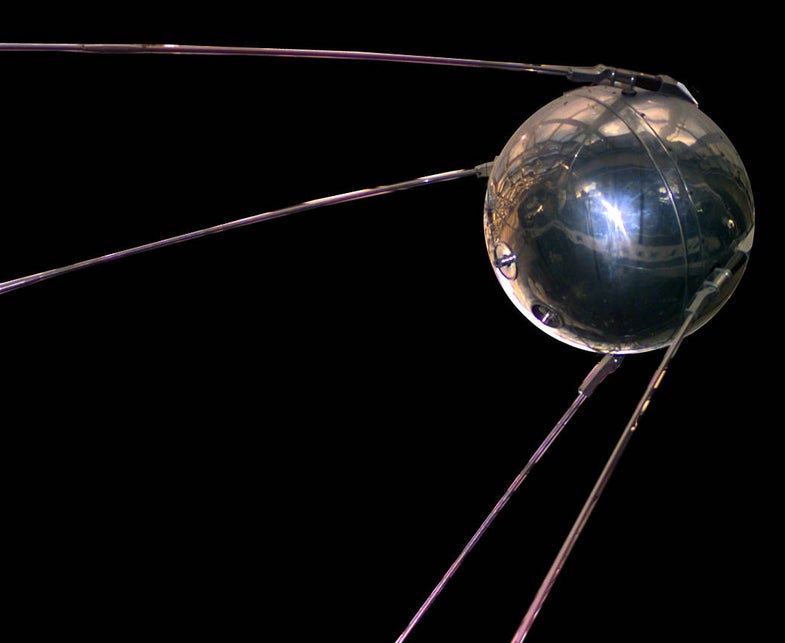 It was 8:07 p.m. on a Friday night in Riverhead, Long Island, when the operators at an RCA Communications outpost picked up a signal that had never been heard before on Earth. A sharp, insistent beep sang out over short-wave radios, filling up our ears with the knowledge that humans had succeeded in sending something outside our protective blanket of nitrogen, oxygen, and carbon dioxide.

Within hours of the announcement, diligent searchers of the skies—all volunteer amateur astronomers who had trained for this moment—assembled, and confirmed with their eyes what our ears already knew. In Terre Haute, Indiana; Whittaker, California; and Columbus, Ohio, these stargazers tracked a faintly shining object as it sped around Earth at 18,000 miles per hour, heading from west to east across the darkened sky.

The appearance of a second, 184 pound moon in the skies above America shocked the nation, not in the least because our new moonlet had been sent there by the rival Soviets.

Newspaper reports at the time asked the man who oversaw America’s yet-to-launch satellite program, Rear Admiral Rawson Bennett, for a reaction to Sputnik’s launch. He replied by saying that the push to put satellites in space had never been conceived of as ‘a race.’

To which the entire world responded; “Yep, uh-huh, sure, this isn’t some kind of space race or anything.”

Though Sputnik’s launch is looked at today as the moment that sparked the space race between the US and USSR, the push to leave the limits of the planet started much earlier. Scientists during WWII had started to work with rockets—with devastating and deadly results. Starting with the German V2 that obliterated parts of London during the last part of the war, rockets were used to ferry weapons of increasing strength to ever-more distant targets.

But some researchers in both the Soviet Union and the United States had already begun to contemplate other uses for the missiles, building on theories established before the war. One of the of the first people to propose that a rocket could be used to reach space was Konstantin Eduardovich Tsiolkovsky, a Russian scientist who figured out rocket dynamics in 1903. Nearly 50 years after his work was published, a new generation of scientists were about to get the perfect platform to test those theories.

During the years after the war, nations were understandably focused on rebuilding (and making sure that another similarly-scaled war wouldn’t break out), not on an international exchange of ideas. But by 1950, scientists were eager to start learning more about the Earth instead of fighting over who got which bit of it.

In the spirit of two other massive international efforts—the International Polar Years of 1882 and 1932, which saw hundreds of scientists banding together to study the polar reaches of the planet—a small group of American researchers proposed that 1957-1958 would be an International Geophysical Year dedicated to learning more about the world, from mapping out the seafloor to sending rockets into space to get a better view of Earth.

The United States was quick to announce that it would launch artificial satellites during the IGY. The Soviets weren’t far behind, though the latter kept most details about their program secret. That’s one reason that Sputnik I was such a shock to the world—very few people knew how far along the Soviets were in their program.

The race is on

In one of the few concessions to public interest in the launch of artificial moons, the USSR did release the information about what frequency their satellite would broadcast on in the weeks prior to their successful launch. As Sputnik circled overhead, newspapers posted details about when the best time to see the satellite would be. People peered through binoculars in backyards during the brief hours between dusk and dawn when it was most visible, or tuned in to ham radios to witness Sputnik passing overhead.

America, bereft in its second place status, panicked, and started pushing students towards Science, Technology, Engineering, and Math in the hopes of catching up. Serious op-eds were posted in major publications decrying America’s failure to educate successful engineers. Money was thrown at science departments at major universities. And in the aftermath of Sputnik, the United States founded NASA.

Needless to say, scientific competition got heated at the height of the cold war.

The United States launched a satellite, Explorer 1, four months after Sputnik, but the Soviets stayed one step ahead of the Americans for most of the space race. The USSR launched Laika, the first living animal to head into orbit. Yuri Gagarin beat John Glenn into space by 10 months, and Valentina Tereshkova beat Sally Ride to being the first woman in space by nearly 20 years. Russian cosmonauts made the first harrowing spacewalk. They also crash-landed a probe into the Moon, and took pictures of the far side of our natural satellite in 1959—10 years before Neil Armstrong ever walked on the lunar surface.

That’s not to say that the American space program was slacking. In a push to catch up to the Soviets, they developed the Gemini capsule, which allowed two astronauts to spend up to two weeks in space, and gave them the capability to rendezvous with other spacecraft and maneuver in orbit. Those capabilities prepared NASA to finally land on the moon in 1969, something that no other country has managed even today.

Competition between the two superpowers continued on space stations and spaceflights for years after the moon landing, ostensibly until the Apollo-Soyuz mission, when a Soviet and American spacecraft docked in space and symbolically opened a new era of cooperation. A closer relationship in space followed the dissolution of the Soviet Union in 1991.

In a two-person race, there’s a winner and a loser. But with a finish line that kept moving, participants that continue to change, and new equipment and hurdles both constantly added to the course, declaring a definitive winner is tricky. Soviet fans might point to a long track record of hitting their mile markers first. For proponents of the American space program, there’s the whole Moon-landing thing.

But in the end, both nations got farther racing against each other than they ever would have managed if they were just trudging along at their own pace. The space race pushed both countries to innovate, challenge their technical limits, and stretch the boundaries of what was supposed to be possible.

The winner of the space race wasn’t the US or the USSR. It was all of us. Without it, we wouldn’t have weather satellites, telecommunications, GPS. We wouldn’t be able to contemplate visiting not our moon, let alone other worlds.

It’s not just a two-person race anymore. China joined the United States and Russia as a space-faring country in 2003, becoming the third nation to launch a human into space. Currently, China and Russia are the only two countries with the capability to launch crewed missions (the United States’ space shuttle retired in 2011). But plenty more are clamoring to get there. There are now 71 different national or international groups with space agencies, and Australia just announced that it would set up one of its own. Private space companies regularly launch cargo into space, and hope to deliver humans into orbit shortly.

A lot has changed in the past 60 years—but it all started with that beep.