Humans tend to imagine things we don’t fully understand in our own image: for instance, we anthropomorphize God, most sci-fi... 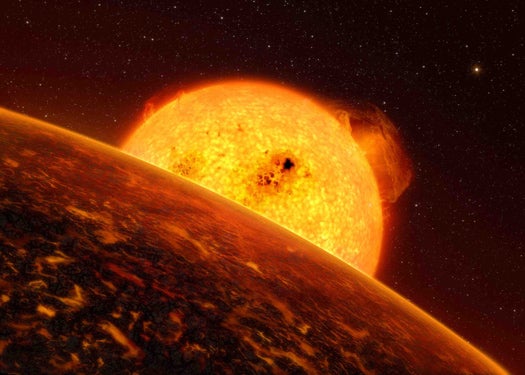 Humans tend to imagine things we don’t fully understand in our own image: for instance, we anthropomorphize God, most sci-fi movie aliens are some variation of a biped with two eyes, a nose and a mouth, and every planet Captain Kirk visits has an atmosphere just ripe for human respiration. But science tells us things are rarely so neat and tidy out in the great unknown, and just to prove how weird things can be out there, scientists at Washington University St. Louis ran a model of the atmosphere of COROT-7b — an exoplanet discovered last year by the COROT space telescope — and found that the atmosphere contains the ingredients for rocks. That’s right: when it rains, it rains pebbles.

There are a lot of planets outside of our solar system, and astronomers have located about 400 of them in the past two decades orbiting stars in other parts of the galaxy. Many are gaseous giants like Jupiter, others icy like our solar system’s outermost planets (or in Pluto’s case, former planet). COROT-7b is a rocky mass like Earth, though twice its size. By gathering data from both COROT-7b and nearby COROT-7c, researchers determined that the planet is almost certainly made up of silicate rocks like the ones in Earth’s crust. However, due to its proximity to its star (just 1.6 million miles, or 23 times closer than we are to our sun), it’s likely not hospitable to life, at least not to any kind we are familiar with.

That close proximity to its star keeps it gravitationally locked in place just as the moon is to the Earth, meaning the same side of COROT-7b always faces the star. As such, it stays very, very hot there (about 4,220 degrees Fahrenheit). That kind of heat vaporizes rocks, and that’s exactly what happens on COROT-7b. Using computer modeling, the team at Washington ran through four different scenarios with four different starting compositions (since the exact makeup of the planet is unknown) with the same result each time.

Just as water vaporizes in our atmosphere only to condense at higher, cooler altitudes and fall back to the Earth as rain, so do the sodium, potassium, silicon monoxide, magnesium, aluminum, calcium and iron of COROT-7b. When they condense, however, they condense into rock clouds that rain little pebbles of different types of rocks. What’s more, the type of rock is dependent on altitude. The atmosphere gets colder the higher up the rock vapor goes. Since each rock or mineral has a different boiling point, the materials with the highest boiling points will condense out at lower altitudes, while the ones with lower boiling points can rise higher as vapor before condensing back into rocks.

Something tells us that if the lack of oxygen and the molten surface of COROT-7b didn’t put off Captain Kirk and company, constant showers of silicate rocks might.