Why so many diamonds are making science headlines this week

They’re windows into the heart of the Earth. 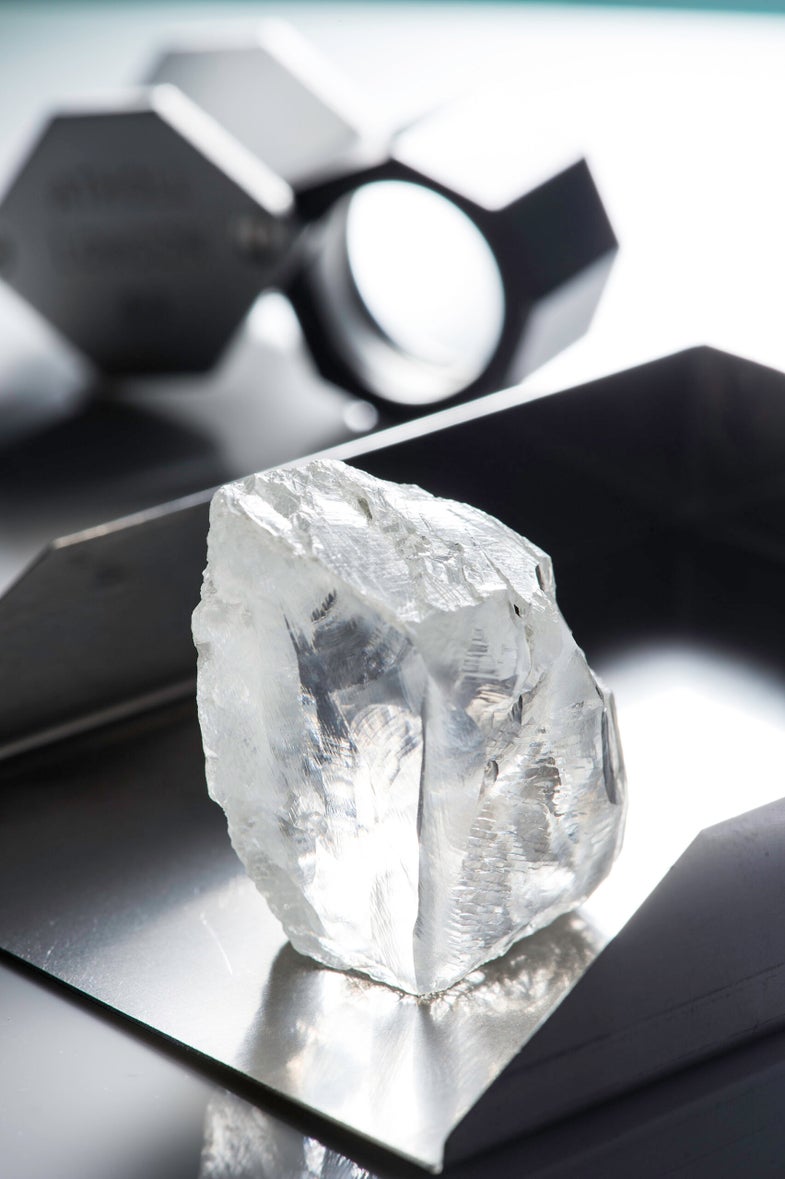 Diamonds have been in the news quite a lot this week, and not because of any celebrity engagement news. Instead, it’s what’s inside that counts.

In separate studies, published in Science and Nature, researchers announced that they had found some unusual inclusions in diamonds. An inclusion is exactly what it sounds like—something (usually a rock or mineral) included in another rock or mineral.

In this case, both studies found that the diamonds had trapped strange forms of minerals that had only been synthesized at the Earth’s surface before—neither are naturally occuring at the mild temperatures and pressures we experience here on the edge of the Earth’s crust.

Diamonds that aren’t made in a lab are typically born deep in the Earth, with the largest diamonds formed hundreds of miles under the surface of our planet. It’s impossible to observe that environment directly. Our deepest hole only extends 7.5 miles into the ground in Russia.

So how do we know anything about what’s beneath our feet? There’s remote sensing, sure, using measurements taken from satellites, or even earthquakes to infer what’s happening down there. But we’ve also gotten reports from things that have really been there, and survived the long treacherous journey from the depths to our labs. Some of the most reliable of these messengers are diamonds, which are born in intense heat and pressure and then get catapulted up from the depths in massive volcanic eruptions.

The same qualities advertisers use to sell diamonds to the public—their insane strength, hardness, and staying power—are the same things that make them reliable witnesses for geologists looking to understand the composition of the inner reaches of the planet. That’s not just the 50-100 miles of the crust, but also the deeper layers, like the 1,800 mile-thick mantle encircling Earth’s core.

By looking at diamonds formed in the mantle, researchers can get an idea of what’s going on down there. And they aren’t looking for perfect diamonds. What jewelers see as flaws, geologists may find priceless.

Which brings us back to the inclusions that brought us here in the first place. In Science, researchers announced they’d found an incredibly rare form of ice trapped in diamonds from China and a variety of mines in Africa.

Yes, you read that right. Ice. Good, old-fashioned H2O in a crystal state. But this isn’t your typical ice, the kind you get in a drink or slip on while walking down the sidewalk. This, my friends, is Ice-VII.

You might remember it from last year when scientists re-created the ice in a lab by zapping water with lasers and watching the molecules line up into this specific form. Ice-VII is thought to be common on other planets where the temperature and pressure profiles are very different from the surface of our own.

It got into the diamonds deep in the Earth as liquid water, and got trapped in the growing diamond crystal. Then, when the diamonds ascended to the surface, that pocket of water reacted to the change in depth by freezing into Ice-VII. The strength and robustness of the surrounding diamond kept samples of ice from melting back into water, even at the surface.

The diamond is part prison, part time machine. Its crystal cage prevents escape, preserving material in conditions the gem experienced in the past.

This isn’t the first time reserchers have found evidence of liquid water deep in the ground, but it’s still a pretty cool discovery.

And ice isn’t the only thing that diamonds can trap. In Nature this week, researchers reported on tiny pockets of a common but elusive mineral found in diamonds from South Africa.

Calcium silicate perovskite is believed to be common inside the planet’s mantle, but is not found in the low temperatures and pressures on the surface. Its presence, the paper suggests, indicates one of the most massive recycling projects in the world: the rebirth of rock from the ocean floor within the mantle.