Life on Earth exploded, but meteorites didn’t start the party 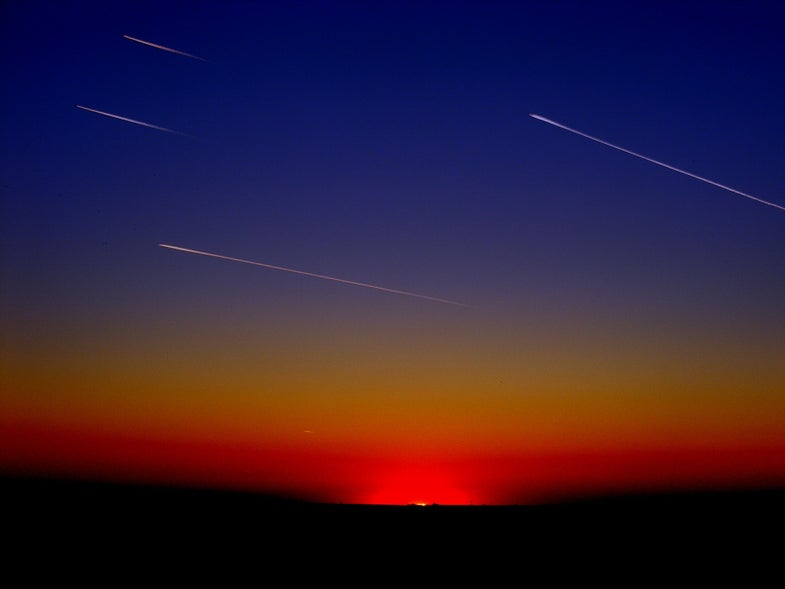 A modern evolutionary myth may have been dispelled.

Some 470 million years ago, a wealth of meteorites started falling to Earth, filling the sky with shooting stars. Around the same time, life on Earth erupted into an astonishing diversity of new critters, during the impressively titled Great Ordovician Biodiversification Event (GOBE). Some scientists connected these two instances, proposing that as space rocks plunged into the ocean, they somehow ignited an evolutionary eruption in Earth’s seas.

But new research, published in Nature Communications, suggests that the meteorite showers started two million years after the great life explosion, which puts this tempting theory in some hot water.

“Our results confidently rule out that meteorite bombardment had any—or any significant—role in the GOBE story, as had previously been proposed,” says Anders Lindskog, who studies Earth’s environmental past at Lund University in Sweden.

Sea creatures flourished during this period. Predatory nautiloids with grasping tentacles, spined and armored mollusks, trilobites, corals, plankton, and grapolites—colonies of creatures who shared the same skeleton, like walls of an apartment building—dominated the seas. Today, their fossils are found in rock layers around the world.

But in another layer—an ancient seafloor packed with meteorites—Lindskog and his team found convincing evidence that the space rocks started falling long after life began to flourish on Earth, around 470 million years ago.

The clues came in the form of tiny crystals, and they found thousands of them. Zircon crystals are incredibly useful because “they basically act like clocks,” says Lindskog. The ratio of elements in the crystals change in precise ways over time, which allowed the team to figure out, to a pretty precise degree, when the crystals formed.

The crystals don’t lie. They were born around 468 million years ago, confirming that the meteorites fell to Earth during this period. The rocks splashed into the sea and settled down for a long rest next to these crystals, which were just forming in seafloor sediment, two million years after the great explosion of life.

Although the meteorites’ role in diversification is now thrown into question, the idea that such a shake-up could have stimulated Earth isn’t a crazy notion. “Evolution does seem to speed up when environmental conditions aren’t in equilibrium,” explains Lindskog. “So such a scenario is not entirely unreasonable.”

But now, we’re all left wondering about what might have triggered the Great Ordovician Biodiversification Event.

At the time, life on Earth was still young, so there was ample opportunity for new life to find niche, unoccupied environments and thrive in them.

“Life had only been around for less than 100 million years, which is nothing,” says Clive Neal, who studies planetary geology at the University of Notre Dame and wasn’t involved in the new study. “There’s a lot of niches that could still be habitable. And you get biodiversification if there’s a niche available. Life will fill it.”

Extinction events open also open up opportunities for new creatures to evolve and fill vacant niches, like an unexploited area of coral reef. Neal points at a mini-extinction event that occurred 511 million years ago. The ruthless emissions from an Australian supervolcano (he points out that today’s Yellowstone is just a puny one in comparison) wiped out a bunch of life, but in doing so, may have opened up opportunities for other species. Enter GOBE.

Also helping the cause for flourishing life were rising sea levels. “The very high sea levels that prevailed at the time provided enormous marine shelf areas, with more space for life to thrive,” explains Lindskog.

Most of all, Lindskog emphasizes, we should never underestimate the inherent biological ability of creatures to simply adapt. “Life somehow has a built-in ability to evolve,” he says. Even without a bombardment of meteorites.