This Is The Best Model Of The Sun’s Magnetic Field, And It’s Hypnotizing 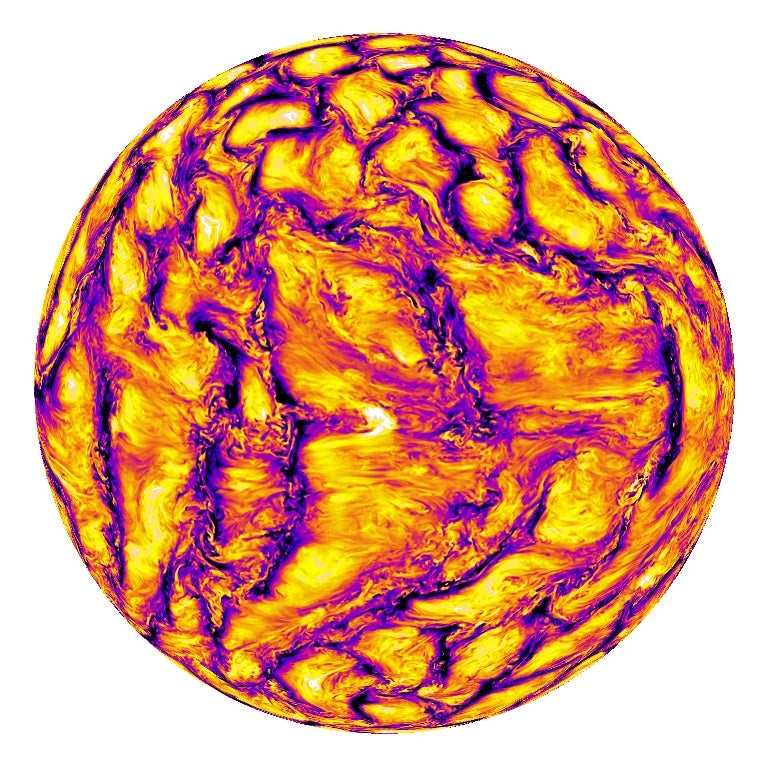 The sun is weird. For some reason, every 11 years, solar activity ramps up. More sunspots and solar storms appear on the surface. The sun gets brighter and spews out higher levels of charged particles that could potentially take out Earth’s power grids.

The sun’s swirling magnetic field is at the heart of the phenomenon, and could hold the key to predicting and understanding it. That’s why scientists have been trying for decades to model solar magnetic activity in computer simulations, but it hasn’t been easy. Large-scale, low-resolution models seemed to match the sun’s behavior pretty well, but higher-resolution, small-scale models couldn’t account for what was happening at the large scale.

Now, with the help of a couple of supercomputers, scientists have created a model that works at both the small and large scales, and it might eventually help to predict the timing and intensity of solar activity. The research was published today in Science.

In an interview with Popular Science, Matthias Rempel, who studies solar variability at the National Center for Atmospheric Research and is a co-author on the study, explained what the problem was.

What Rempel and his colleagues found was that, if you increase the model resolution even further, then the small-scale magnetic fields actually make the solar fluids act as if it were viscous. Sort of like how water with seaweed in it can be more difficult to swim through, Rempel says. When the team’s model accounted for this stickiness, their small-scale simulations resulted in a larger magnetic field that made sense.

“It gives some justification for the earlier models,” says Rempel, “but it also tells us, if you want to model something like the sun, we really have to account for magnetic field on all scales, and even the smallest scales of the magnetic field play a crucial role for understanding the larger scale components.”

But the simulation isn’t perfect yet. “At his point it’s still very difficult in these simulations to get something which looks like the sun,” says Rempel. The model still doesn’t recapitulate the 11-year solar cycle, but it’s a step forward.

In the future, the team hopes it refined versions of the model will help explain how the solar cycle works and how it will evolve in the future.