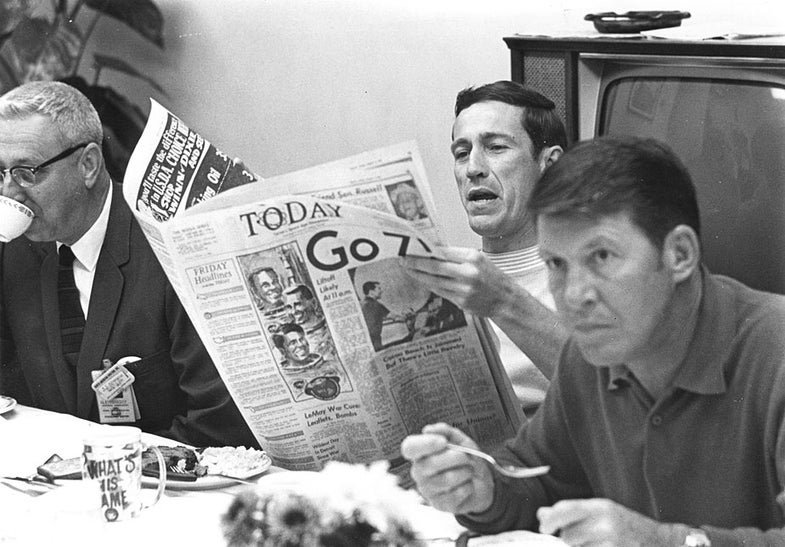 Though it was the first manned mission of the program and the was the first to fly after three colleagues were killed in the Apollo 1 fire, Apollo 7 is probably the least well remembered of all Apollo missions. It wasn’t a glamorous flight to the Moon or an exciting test of the exotic lunar module. It was a shakedown cruise of the core Apollo spacecraft, the command and service module (CSM), in Earth orbit. The goal was straightforward: demonstrate that this vehicle was up to the challenge of supporting the demanding lunar landing missions.

The crew is similarly unfamiliar to those who don’t immerse themselves in spaceflight history for both work and pleasure. Commanded by Mercury and Gemini veteran Wally Schirra, rookies Donn Eisele (Command Module Pilot) and Walt Cunningham (Lunar Module Pilot) rounded out the crew. Both were assigned to shakedown flight because Deke Slayton, head of the astronaut office and the man behind crew assignments, felt they were perfectly competent but generally weaker than some of their colleagues. Neither was likely to fly a second Apollo flight; Slayton was planning to transfer both the Apollo Applications Program in short order. 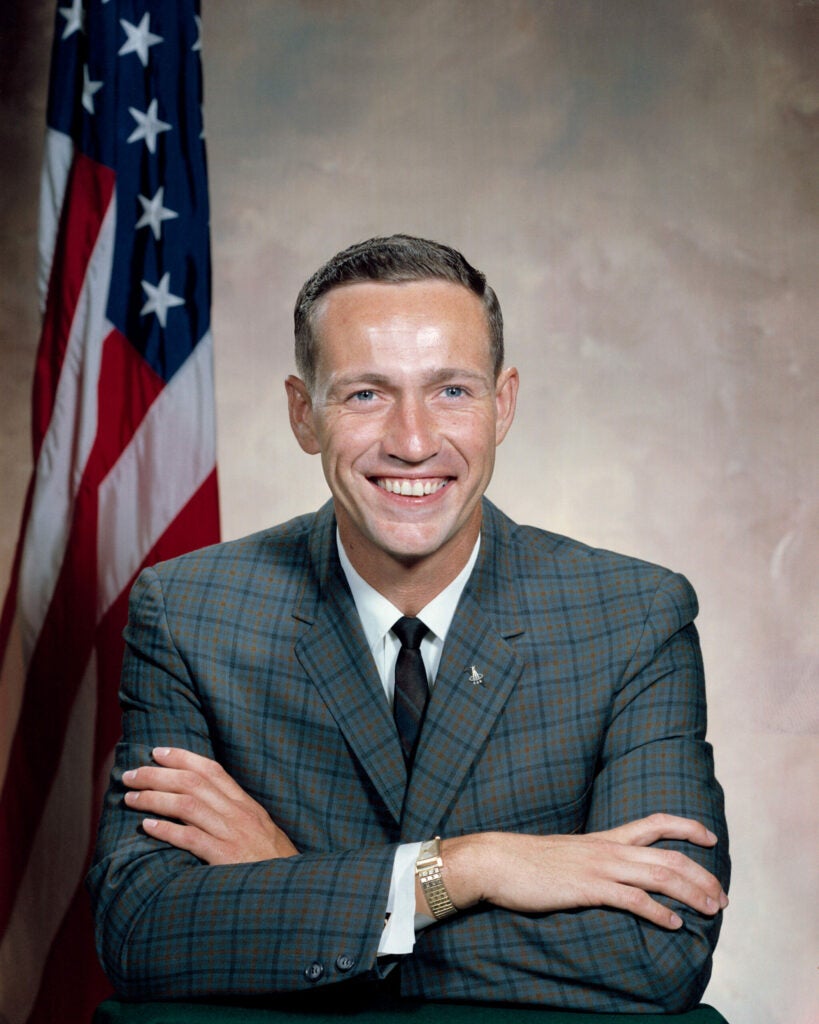 Eisele joined NASA as part of its third class of astronauts in October of 1963 with a Bachelor of Science degree from the US Naval Academy, a Masters of Science in Astronautics from the Air Force Institute of Technology, and flight experience at the Air Force Aerospace Research Pilot School at Edwards Air Force Base under his belt. But it was a lucky dislocation that landed him a spot on the Apollo 7 crew.

Eisele was originally assigned to the prime crew of Apollo 1, a shakedown cruise of the Block I CSM. Apollo 2 was, at the time, scheduled as a second Block I CSM flight to carryout any further tests and checks NASA might have missed on Apollo 1. Apollo 3 would debut the Block II CSM, the advanced version that could dock with the lunar module on missions to the Moon. But in the course of training, Eisele twice dislocated his left shoulder in NASA’s hollowed out KC-135, the aircraft flown in parabolas to give astronauts brief periods of weightlessness. The long bone in his upper arm dislocated laterally, and on January 27, 1966, he entered the Methodist Hospital in Houston for surgery. He was expected to make a full recovery, but wouldn’t be fit to fly on Apollo 1. He switched places with Roger Chaffee, becoming the CMP for Apollo 2.

A year after Eisele’s surgery, a fire on the launch pad killed the Apollo 1 crew and forced NASA to step back, regroup, and addressed the obvious problems with the CSM. By the spring, the agency was getting back on track with unmanned mission on deck and the first manned crew in training. The former Apollo 2 crew of Schirra, Cunningham, and Eisele was reassigned the first flight, Apollo 7. 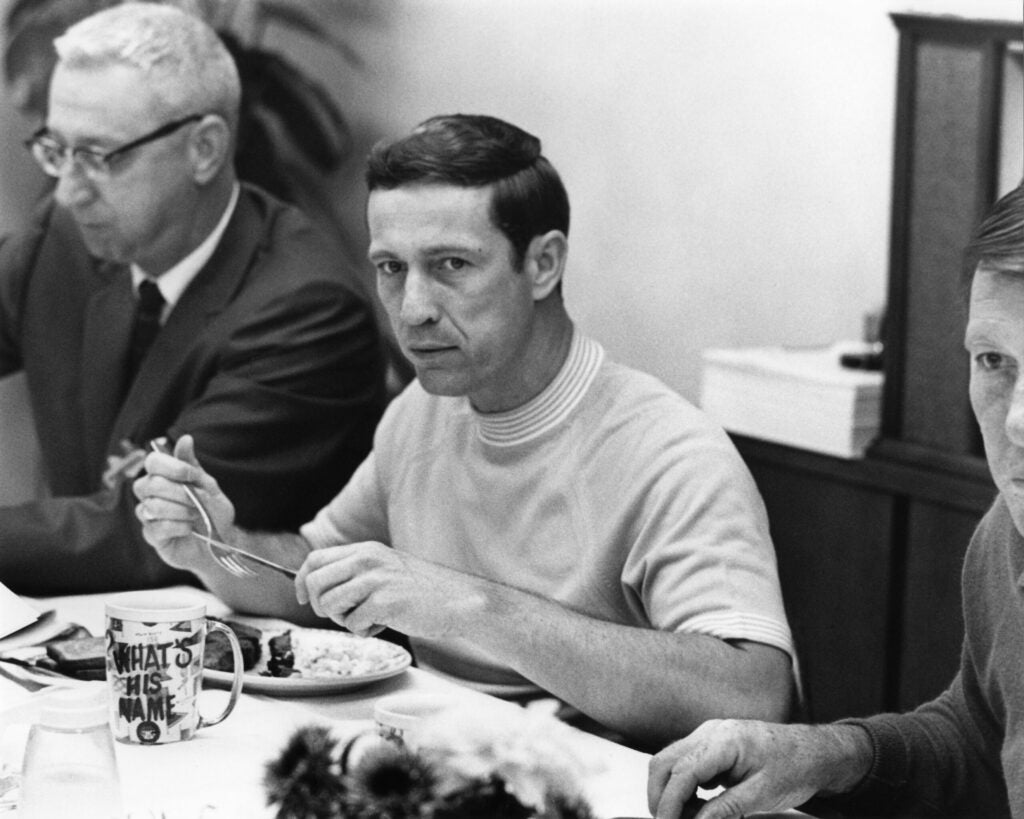 Eisele and the “What’s his name?” mug.

But a nagging shoulder injury wasn’t Eisele’s only persistent issue on his path into space. His surname had been mildly problematic as well: no one seemed to know how to pronounce it. Pronounced like “EYE-se-lee,” variations were both abundant and creative, and nothing changed when he joined NASA.

At one point in Apollo 7’s training, the crew went to NASA’s Michoud facility in Mississippi where the Saturn boosters were being built. Administrator Jim Webb introduced the crew to President Johnson, and when he came to Eisele he stumbled over astronaut’s surname. He pronounced it like “Isell.” From that point on, Schirra decided, Eisele would be known simply as “Whatshisname.”

When Webb publicly announced the crew’s assignment on May 9, 1967, he pronounced all three surnames correctly. And when the mission launched on October 11, 1968, Eisele’s name was similarly pronounced correctly by both NASA representatives and newscasters. But within the agency, the nickname stuck. The Apollo 7 crew was known to their support and ground crews as “Wally, Walt, and Whatshisname.” And now, photographs from the launch day breakfast with Eisele’s “What’s his name?” mug front and centre will preserve his somewhat unfortunate nickname for the ages.