Aliens, man. If we would only listen to them, the world would be a better place. 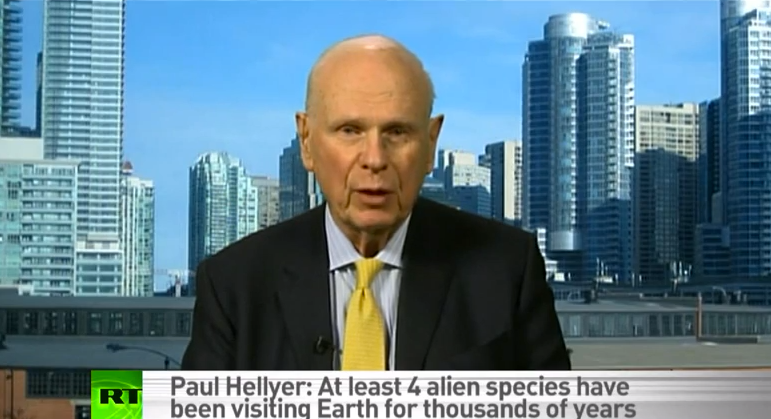 It’s not necessarily shocking to hear somebody claim that at least four different species of aliens have visited the Earth, for thousands of years. But it is somewhat more shocking when that person was once in charge of much of Canada’s military, Paul Hellyer. In a wild interview with Russia Today, the former Canadian Minister of National Defense said that aliens would give us more technology if we would be less warlike. As it is, they are concerned about the effects our nukes might have on the universe.

There has been more alien activity since the first nuclear bombs were detonated in 1945, he said. “They are very much afraid we might be stupid enough to start using atomic weapons again and that would be very bad for us and them as well.” If we were more peaceful, they would be more willing to share their technology with us, he said. According to his website, in September 2005 Hellyer “became the first person of cabinet rank in the G8 group of countries to state unequivocally ‘UFO’s are as real as the airplanes flying overhead.'”

Luckily, most of the aliens are benign or want to help us, though one or two might mean us harm, Hellyer said. Some of the aliens actually look like people, and two female aliens recently visited Las Vegas dressed as nuns and were not detected, he claimed. Perhaps they wouldn’t have gotten away with that stunt in, say, Omaha.

It’s too bad that Hellyer appears to be crazy; his aliens seem to have some good ideas. They think we are spending to much money fighting each other, and not caring enough for the planet and our sick and poor. “We are polluting our waters and our air, and we are playing around with these exotic weapons… and they [the aliens] don’t like that. They’d like to work with us to teach us better ways, but only, I think, with our consent.”

Also, in case you weren’t aware, “the star of Bethlehem is one of God’s flying saucers.” Thanks for the info, Paul!