How does it get so...solid? 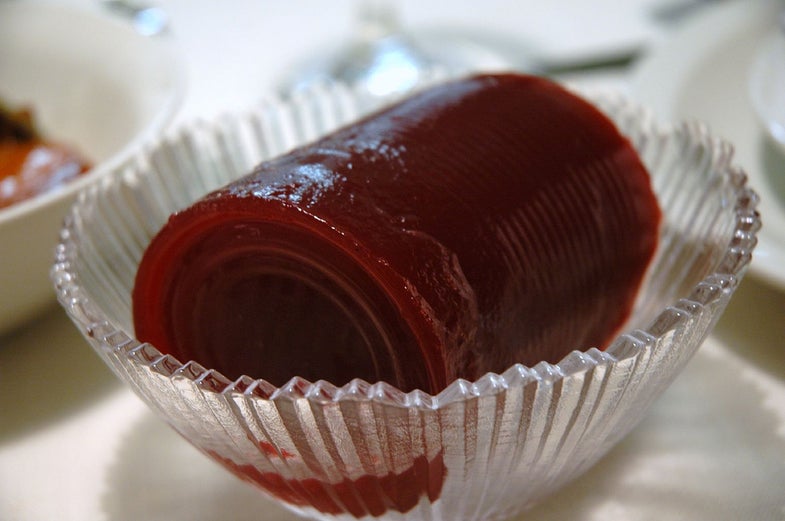 That wriggly jellied can-shape cranberry sauce is common on holiday tables in the United States. It’s probably hanging out on its own, shoved to a corner, on a tiny plate. But it’s usually there. So, I’ve got two questions: Where did this idea come from? And what makes it so… jelly?

Where did cranberry sauce come from?

So, where did the whole can thing come from? The answer is in the way the cranberries are harvested. Americans consume very little of the total cranberry crop as fresh fruit. In 2013, only 5 percent of the cranberries produced were sold as fruit. That means 95 percent of it was consumed as a processed product, like juice, jams, and of course, sauce. And the berries used for sauce and juice are harvested wet.

Until the 1930s, much of the cranberry crop was harvested “dry.” After that, growers started to harvest by fooding the bogs (that’s what you see when you watch those Ocean Spray commercials).

Believe it or not, cranberries don’t actually grow in water, they grow in sandy soil. So, when farmers went from dry harvesting to wet harvesting, the process became much more efficient, and they wanted new ways to make the product last throughout the year. Ocean Spray claims the first jellied cranberry “log” (mmm, hungry yet?) was canned in 1912 by lawyer-turned-bog owner grower Marcus L. Urann. In New Jersey, a grower named Elizabeth Lee was also boiling bruised berries to make a jellied sauce. Lee started working with Urann and the Thanksgiving staple got wider release across the country in 1941.

Why do cranberries turn gelatinous?

And why is it so solid? That’s because cranberries have a high pectin content. In nature, pectin found in fruit helps cells bind cells together. When making a jam or jelly, pectin is often an important ingredient, because the gelatinous polysaccharide is what helps the mixture set.

The dish doesn’t just make it onto the table to add some much-needed color to the meal. In fact, its acid make up makes it a great pairing with turkey. Inspired to try to make your own strange sculpture of jellied cranberry sauce? You can find an educational recipe here.