Are you ready for Astronomy 170 with Professor Sagan? 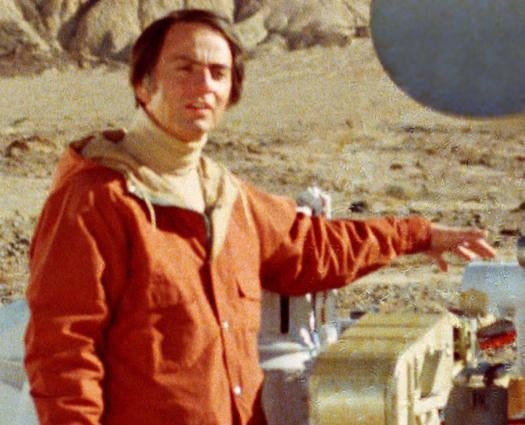 I’m looking at the very first problem astronomer and science popularizer Carl Sagan assigned to one of his Harvard University classes in 1965. I’m already stumped. Can you do it? Sagan asked his students to derive the equation for the theoretical resolving power of a telescope—that is, the math describing the ability of a telescope to distinguish between two objects. You can see the entire problem set online, thanks to the U.S. Library of Congress, which recently digitized and posted course materials from this and one other class Sagan taught, at Cornell University.

You can find links to all of the materials, including lecture notes and problem sets, in a blog post Special Curator Trevor Owens wrote about the newly digitized material. Sagan may have been best known for his popular science books and TV show, Cosmos, but he also taught college classes for three decades. “He was a mentor and an educator to a range of scientists and non-scientists alike,” Owens writes.

Perhaps I would do better in the 1986 Cornell course Owens and his colleagues posted materials for. It’s a class about thinking critically about science. In it, Sagan seems to have tried to teach his young charges to think not just about science, but about many things in their everyday lives. In his typed notes-to-self about the class, he recorded discussion prompts about everything from advertising (“What are the messages in cigarette commercials and advertisements?”) to statistics (“‘Law of averages.’ He’s ‘due’ for a hit.”) to geopolitical relations (“Each person chooses a historical confrontation between two opposing ideologies which has the fervor of the current confrontation between the United States and the Soviet Union. What lessons may we draw for our own time?”).

Seems like there’s a lot we may still learn, for our own time, from Professor Sagan.