Bugs, lasers, and more at the annual meeting of the Entomological Society of America 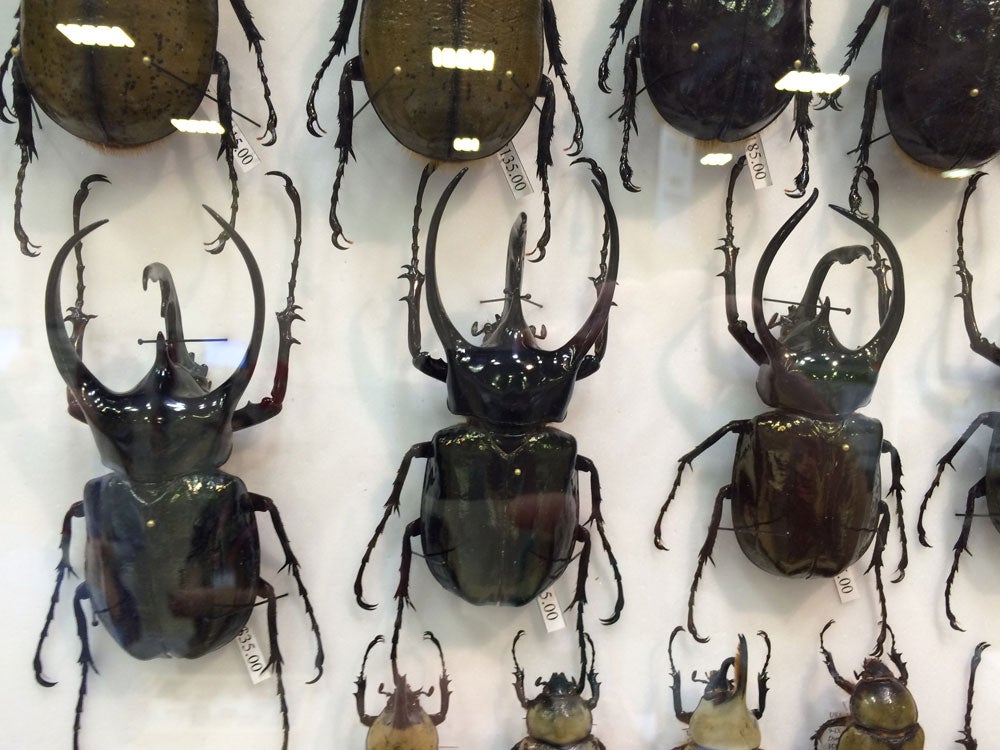 This past week I was in Minneapolis, Minnesota for the Entomological Society of America’s annual meeting. It was actually four conferences packed into the Minneapolis Convention center, combining entomology and agronomy in order to find solutions to problems such as the drought out west or colony collapse disorder. I was there to talk about comics and science communication on a symposium titled, Games, Comics, and Social Media: Outreach Education in Entomology. I was one of several amazing illustrators and entomologists there, and I’ll have my sparse notes and tweets from that talk up soon. But for today, I wanted to showcase a slideshow of the really cool things I saw on the exhibit floor.

As if by fate, my first stop upon entering the exhibit hall was the expansive Bioquip booth. Though it might have had something to do with the crowd they had gathered. On display and up for sale was a fantastic collection of live and pinned athropods.

Bioquip also provides a huge range of entomological equipment, from specimen cases to microscopes to light traps for collecting. Not to mention some more unique tools…

I didn’t get to see it assembled, but they also have an insect bazooka. It doesn’t actually shoot insects, but instead it attaches to a shop vac and sucks them up! It’s basically the industrial version of that little spider vaccuum you can buy online.

Of course, I’d be remiss to neglect all the live tarantulas, centipedes, and scorpions they had for sale.

Since the Atlas beetle (chalcosoma atlas) is somewhat of a mascot for my other comic, Sufficiently Remarkable, I couldn’t leave Entsoc15 without picking up my very own atlas beetle specimen. Special thanks to all the folks at Bioquip!

Next stop was around the corner at LIVIN Farms, who was showing off their fancy new home insect hive.

What can I say? I hadn’t had breakfast yet. LIVIN Farms wants to literally kickstart the home insect protein market. Their farm lets you grow and maintain all sorts of delicious bugs.

It takes a lot of insects to amount to anything more than croutons on a salad, but with a home farm, you’ll be making your own cricket meal in no time. If you want one of your own, you back the LIVIN Hive today!

Viewing specimens both inside and out in full color 3d has never looked so great thanks to Laser Ablation Tomography.

LATScan uses an ultraviolet laser to vaporize a sample one layer at a time, photographing each step. Think of it like 3d printing in reverse. What you end up with is a slice-by-slice look at anything from plant matter to whole insects.

While you end up losing your sample in the process, the advantage over traditional scanning methods (Like CT or PET) is the full color images.

Another cool imaging device was Macroscopic Solutions’ Macropod. It provides an incredibly stable platform and automates the focus stacking process.

Photographing small objects is tricky because the depth of field is so shallow. So if a sample fills the frame, it’s nearly impossible to have it all in focus. That’s why people use a technique called focus stacking. The macropod takes hundreds of photos, while slightly moving the focal depth each time. Afterwards, these images are combined to produce one complete image. You may be familiar with Thomas Shahan’s gorgeous insect photos, which utilize the same technique.

Want to see just how great it is? Look at this photo. There’s a beetle in there being photographed.

See it yet? It’s right there… that little dot on the end of the string.

Now here it is after the magic is done.

Depending on your optics, the macropod and accompanying software is capable of dizzying levels of magnification. Just look at those scales!

I seriously cannot get enough of these photos.

On the Agronomy side of the exhibit hall was Rad Source Technologies, who was showcasing this device which irradiates insects with xrays. Not for Spider-Man purposes though. Instead, it renders them sterile so they can be released and help curb invasive populations.

Finally, I’ll leave you with Coolbean the Soy Bean by Shawn Conley, Judy Mannes, and Marsha Rehns. It’s a fun picture book all about the versatile super crop.