What Are You Doing For Thanksgiving?: Nick Curtola 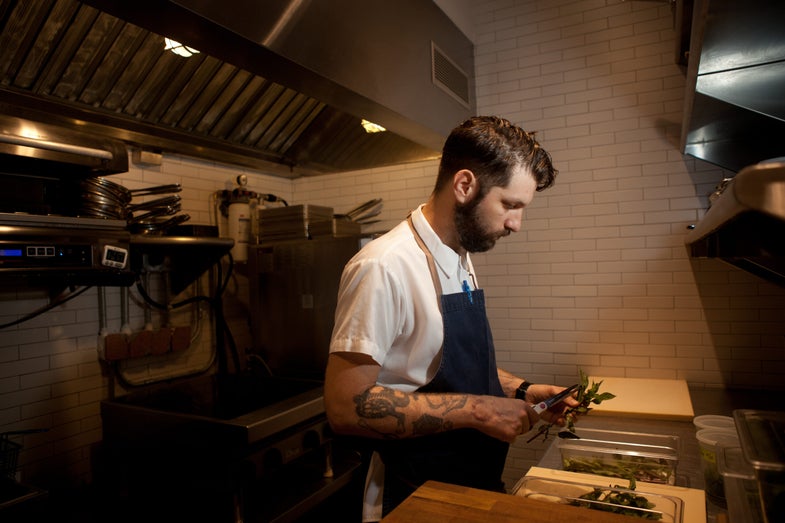 Nick Curtola is the chef at the Four Horsemen, a new wine bar and restaurant in Williamsburg, Brooklyn opened by LCD Soundsystem frontman James Murphy. Curtola previously led kitchens at Glady’s Carribean and Franny’s, an Italian restaurant, both also in Brooklyn. Popular Science spoke with him about his Thanksgiving plans for this year.

I’ll be having Thanksgiving dinner at home with my wife and some friends, a small gathering of orphaned New York transplants. I’ve been brining a turkey this last week in a three percent salt solution with some onions, garlic, sage, rosemary, thyme, oregano, carrots, celery, and sugar. We’ll take the legs off and do a turkey pot pie with a biscuit topping. We’re going to put the breast into a roulade. So we’ll bundle the meat up in tight rolls and roast them. That’s nice because your turkey comes out in a nice round shape with no bones, and you can just slice it like you would a ham.

I definitely enjoy the traditional Thanksgiving foods. They bring me comfort and nostalgia. The only thing I stay away from is the canned stuff, like canned yams. I try to bring fresh ingredients into the meal and make everything from scratch.

For drinks, I’ll be making a mulled wine that we’re going to start doing at the restaurant. It’s a Scandinavian mulled wine with slivered almonds and raisins that get soaked in the wine and spices. I’ll fool around with a few recipes and use my friends as guinea pigs.

At the restaurant, one of the seasonal dishes we’re doing is a Camembert cheese dish inspired by old cookbooks I used to read. The books featured Alpine residents warming their cheese by a smoldering fire and then scooping the melted deliciousness up with some crusty bread. We wanted that feeling of a communal and comforting dish, but we also wanted to make it special in our own way. That’s why we added really nice black truffles and some thick-cut potato chips. It’s kind of our take on a rustic winter warmer.

Any cooking tips for readers?

I’d definitely want to recommend induction cooking. We’ve been using induction stoves to do all our cooking at the restaurant. We have a four-“burner” induction range, along with a couple portable units. Induction technology has finally arrived at a point where it far outshines traditional gas stoves. It works with magnets that produce more energy than gas, much more efficiently. There are no wasted flames licking up the sides of the pan, and the heat is instantaneous and very powerful. It also keeps the kitchen very cool and is super easy to clean.

For home cooking, the stoves that are out there at the moment are actually quite nice. I’d say where the technology would shine for home cooks is the ability to get a pan as hot as we do in restaurants to sear and caramelize meats, fish, and vegetables. Induction is also great for slow cooking because the energy is constant and precise. You’re never worrying about your flame blowing out or getting too high or low over long periods of time. And once you dial in a recipe, you can replicate it day after day because you know you can trust your stove to remain at the level you choose.

Besides having an open wood-burning fireplace or oven (which is my favorite), induction is really tough to beat. It saves time and energy, and is a better source of heat all around for cooking. At least that’s how I feel!