What Is A Sunspot?

And what does it have to do with my GPS being wonky? 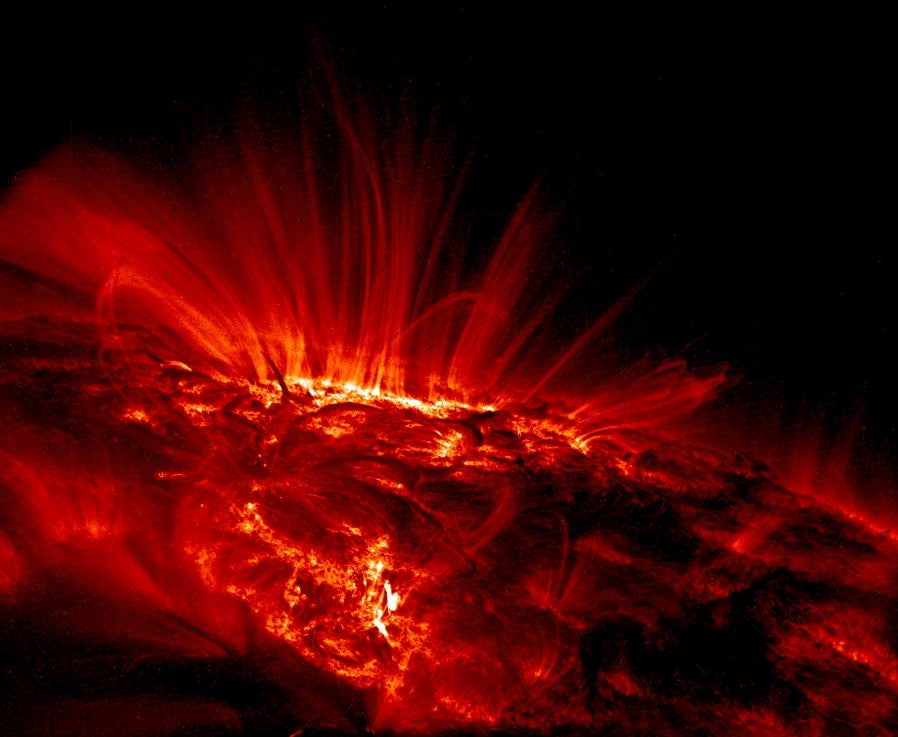 Shown in ultraviolet light, a large sunspot group is visible as the bright area near the horizon. The bright glowing gas flowing around the sunspots has a temperature of more than 1.8 million degrees Fahrenheit. The high temperatures are thought to be related to the rapidly changing magnetic field loops that channel solar plasma. NASA/TRACE
SHARE

Sure, the sun’s light and heat make life possible on Earth, and its gravity holds our entire solar system together. But our nearest star remains surprisingly enigmatic.

Scientists still don’t know, for example, why its magnetic activity fluctuates in an 11-year solar cycle. Or how powerful solar flares can knock out satellites, disrupt GPS systems, and fry electrical grids here on Earth.

What they do know is that sunspots—those randomly-spaced dark blotches on the sun’s surface—are a critical part of that puzzle. In September, an international team of scientists was able to show, for the first time, how magnetic activity in the sun’s interior leads a sunspot to form. And it revealed how that energy is later released in plasma jets and explosions, phenomena similar to powerful solar flares.

Sunspots are easily recognized as speckles on the surface of the sun. Scientists have known since the early 20th century that sunspots are actually bundles of intense magnetic field lines—the lines along which the forces of a magnet move. They can be as big as planets, too. “Sunspots are one of the most important pieces of the sun,” says Shin Toriumi, a scientist with the National Astronomical Observatory of Japan.

To dig deeper into sunspots and figure out how they work, Toriumi and colleagues combined data from NAOJ’s space-based Hinode solar telescope, which observes the solar surface, with data from NASA’s IRIS, a space telescope observing the sun’s chromosphere—that gassy middle layer of its atmosphere. Using the observations they had gathered from the two telescopes, they employed NASA’s Pleiades supercomputer to run numerical models that simulated a sunspot’s formation. The results allowed scientists to observe the never-before-seen interaction between two of the sun’s layers.

A group of sunspots, labeled as Active Region 1520. The large spot on the bottom left stretches more than 11 Earths, or 87,000 miles across. The full chain of spots is closer to 200,000 miles across.

How do sunspots work?

The combined data sets showed how magnetic field lines within the sun emerge at the surface as small bundles called pores. When two of these pores approach one another, they squeeze the plasma between them into a long structure called a light bridge. Eventually, as the squeezing continues, the bridges merge into a single, large sunspot.

The process of breaking and reconnecting the magnetic field lines triggers violent explosions that cause plasma to jet into the atmosphere. The magnetic fields can also trigger much bigger solar flares. Solar flares are the largest explosions in the solar system, and are so powerful they can actually disrupt our technological infrastructure here on Earth. X-rays from flares can interfere with radio communications, UV radiation can create more drag on satellites in orbit, and radio emission can actually make GPS measurements less precise.

“Data simulation allows you to make the connection between the layers you can observe, and what’s happening underneath them [in the sun’s interior],” says Matthias Rempel, a solar physicist at the High Altitude Observatory of the University Corporation for Atmospheric Research.

Can they predict solar flares?

Toriumi says the observations of these small plasma jets and explosions are a step toward better understanding damaging solar flares. “The basic physics are the same,” he says. Since both are caused by sunspots, researchers may one day be able to figure out how to better protect satellites and radio communication from the effects of solar flares. And yes, your GPS too.

The team next wants to better understand magnetic reconnection by observing magnetic field lines in the chromosphere, a key mission of Japan’s planned Solar-C space telescope.