Seeing Inside The Apollo Lunar Module

Most pictures of the Apollo lunar module show the full, spidery spacecraft from the outside. Some of the best pictures... 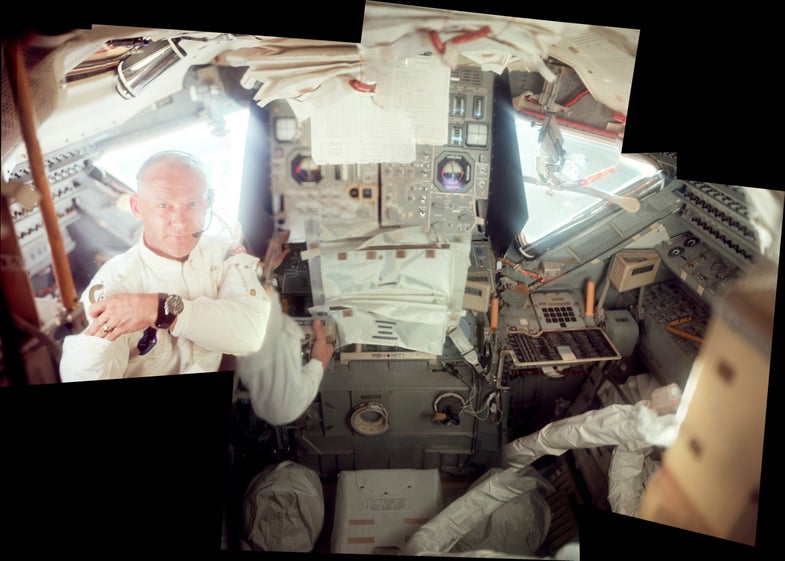 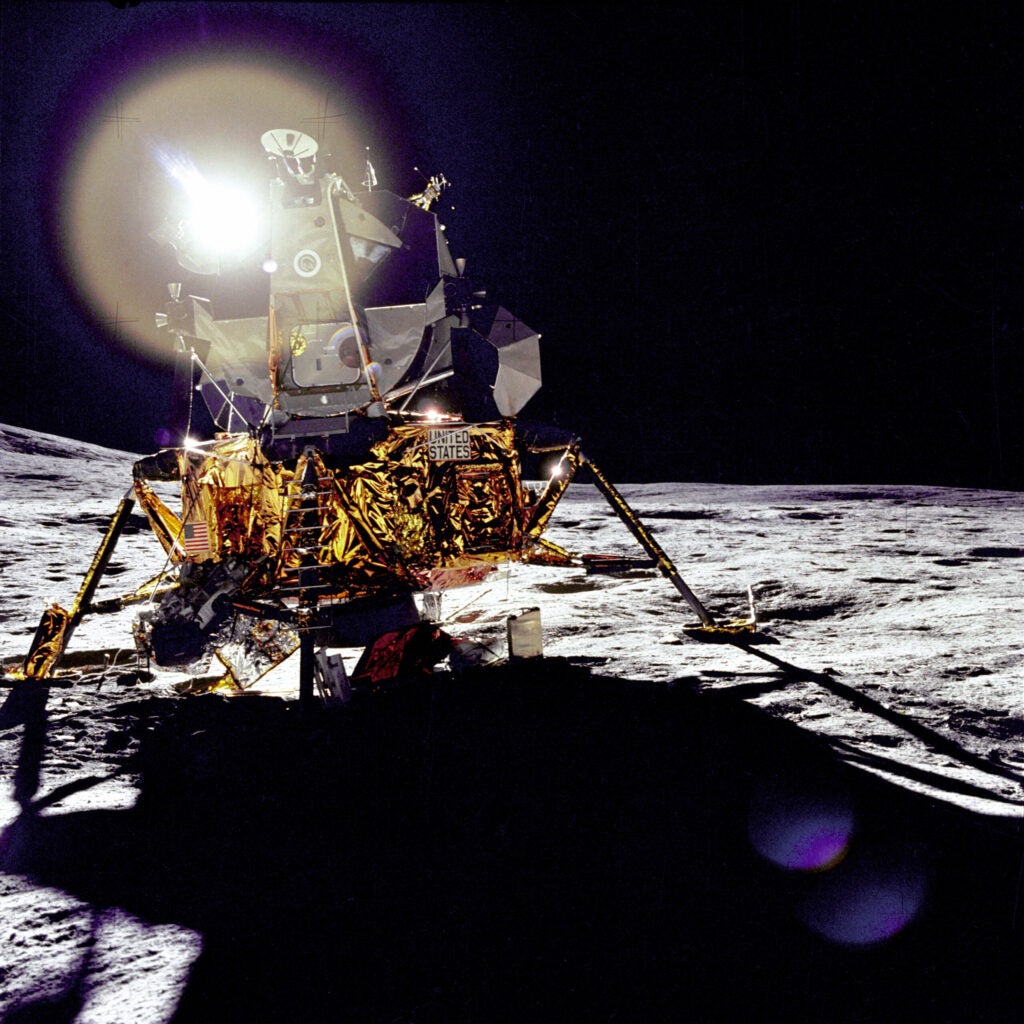 Most pictures of the Apollo lunar module show the full, spidery spacecraft from the outside. Some of the best pictures are of it sitting on the surface of the Moon, accidentally but somehow artfully lit by the sunlight reflected off the lunar surface with a space-suited astronaut climbing down the ladder or standing stiffly yet triumphantly by its side. Pictures showing the inside never really give a sense of how big it is. Pictures taken inside simulators using a fisheye lens distort the internal dimensions, pictures of astronauts after surface EVAs focus on the man and not the machine, and pictures of recreated LMs in museums don’t show what it was like filled with gear and manuals.

Of all the pictures of the lunar module commonly accompanying articles about the Apollo lunar landings, none really show just how tiny the spacecraft was. It was tiny; with its legs extended it stood 22 feet and 11 inches tall with a diameter of 31 feet measured diagonally between footpads. And it was made of two parts. The lower descent stage whose main engine slowed the spacecraft to a soft landing then acted as a launch platform for the ascent stage to propel the crew back into lunar orbit at the end of their stay on the surface. 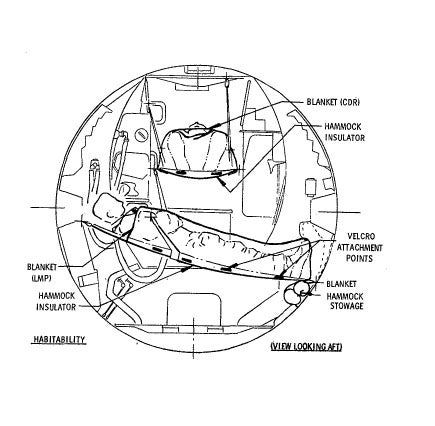 The crew compartment was part of the ascent stage, the larger upper half of the spacecraft that was just 12 feet and 4 inches tall, and 14 feet and 1 inch in diameter. There weren’t any seats for the crew; during powered flight periods they were tethered into place by spring loaded cables fixed into the floor. Astronaut who had a sleep period on the Moon slung hammocks like bunk beds, crossing one over another. In some places the walls were so thin – the vehicle was designed to fly in a vacuum so only had to withstand being pressured to 5 psi – astronauts had to watch they didn’t hit anything too hard. The foil that acted as a micrometeoroid shield in some sections was actually taped in place.

We sometimes see the lunar module in flight, sometimes a little beaten after thrusters disrupted the thin material on its surface, but we rarely, if ever, see it in its messy, tiny glory midway through a mission. And that’s what makes this picture so incredible. 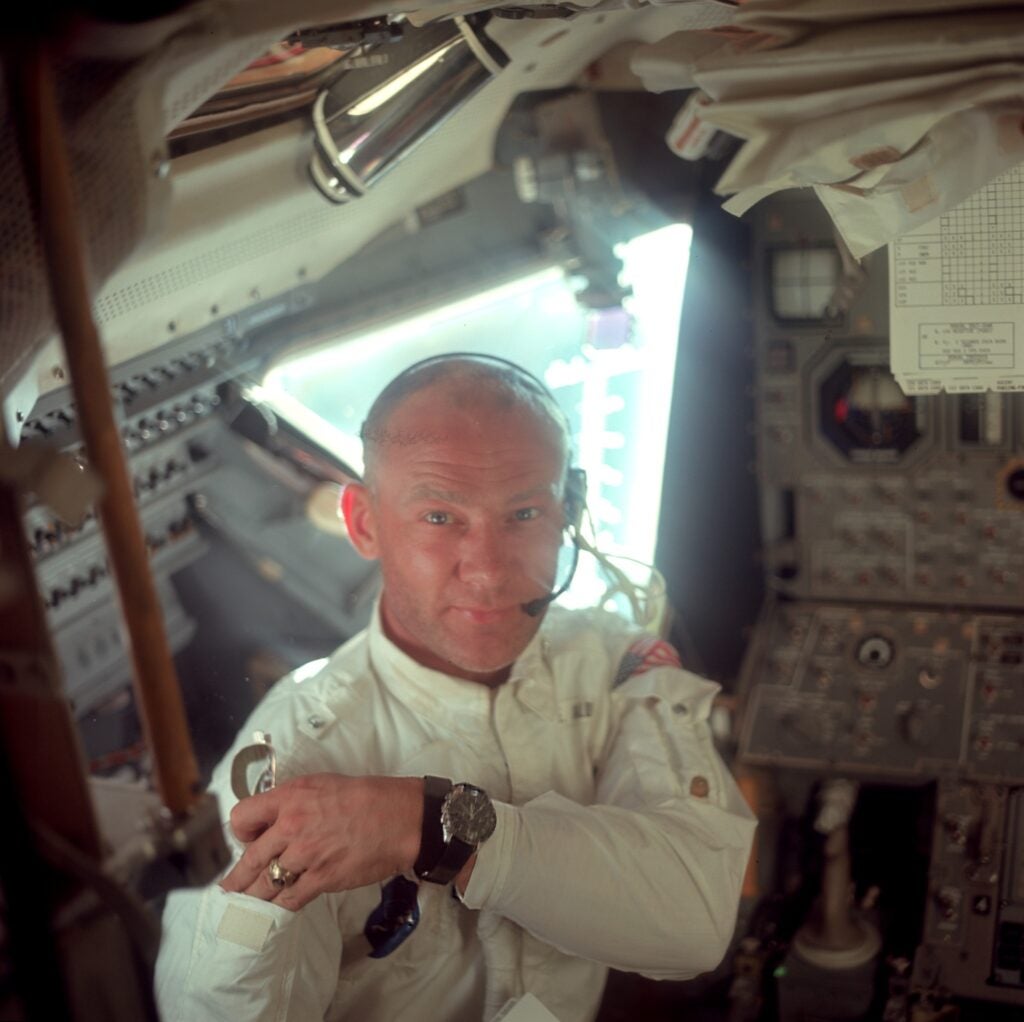 Aldrin in the LM.

A little more than 57 hours after launch, the crew of Apollo 11 had just finished their fourth TV transmission and Neil Armstrong and Buzz Aldrin were inside the Eagle doing their initial spacecraft checkout and inspection. Capcom Charlie Duke passed up Houston’s recommendation for Armstrong and Aldrin to continue their LM familiarization activities for about an hour, then reenter the command-service module and close the hatch. Their next order of business, at about the 58 hour mark, was to establish their passive thermal control roll, the slow “barbecue roll” deigned to manage the spacecraft’s external temperature that would make further TV transmissions that day impossible.

Armstrong took this fairly familiar picture of Aldrin showcasing the Omega Speedmaster on the astronaut’s wrist, a favourite Apollo picture among watch aficionados. But there’s more to the picture than what we typically see. It seems Armstrong kept shooting Aldrin as he continued checking out the lunar module, ending up with a series of pictures. And at some point, Jon Hancock, a contributor to the Apollo Lunar Surface Journal, composed them into this amazing single shot that shows the full spacecraft interior on its way to the Moon. So let’s look at it one more time, shall we? 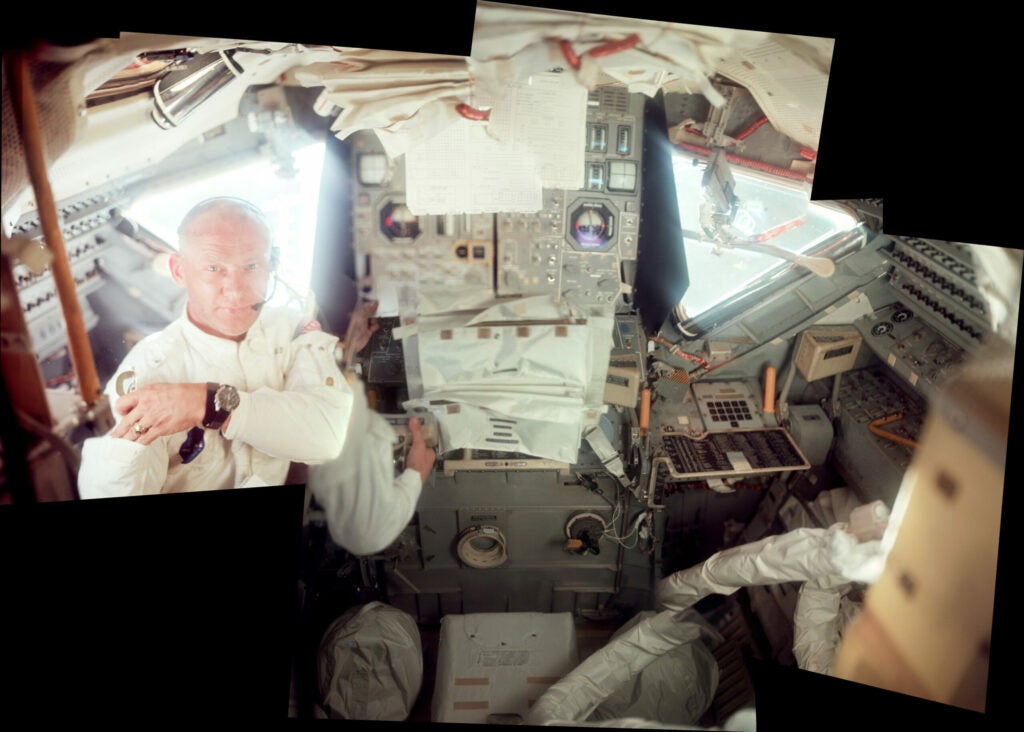 Aldrin inside the LM Eagle

Further Reading/Sources: Check out the full resolution shot of the inside of the Eagle!; Grumman’s News Reference for the Lunar Module; The Apollo Lunar Surface Journal; Apollo 11 Air to Ground Voice Transcript; Apollo 11 Mission Timeline