The Apollo spacecraft was neither mass produced nor reusable. Of the 36 vehicles built by North American Aviation (and later... 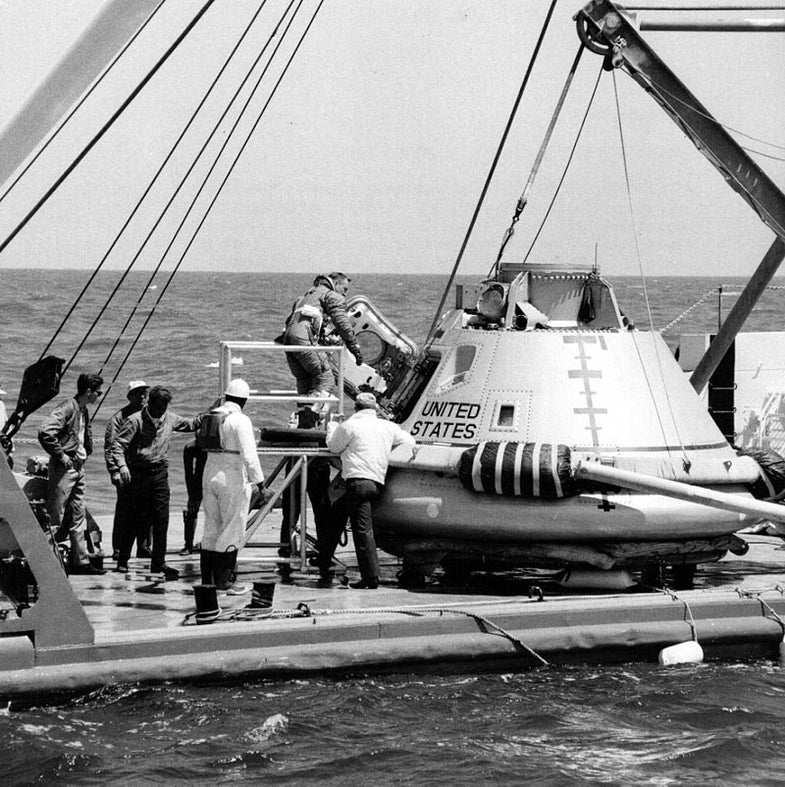 The Apollo spacecraft was neither mass produced nor reusable. Of the 36 vehicles built by North American Aviation (and later North American Rockwell), some of which were scrapped before completion, only 19 launched on suborbital or orbital missions. The rest were built for specific types of testing. In the case of spacecraft 007, it was built specifically for post-splashdown qualification tests including two 48-delay recovery tests. Twice, three men sat inside spacecraft 007 as it bobbed in the Gulf of Mexico for two full days waiting to see if it would float as designed or sink. 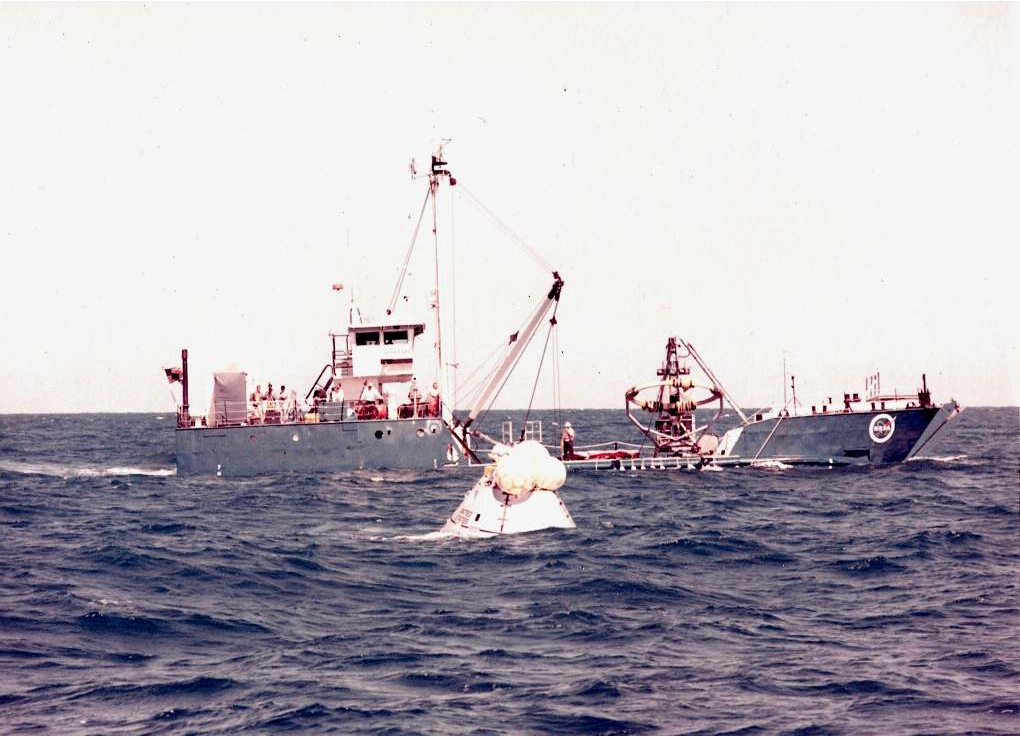 Spacecraft 007 arrived at NASA’s Manned Spaceflight Centre in Houston on April 18, 1966. Designed to test the spacecraft’s post-landing systems – the crew egress, survival, communications, location, power, and ventilation systems astronaut would rely on after returning from the Moon – this test article was a Block I version of the command module with all the same configuration as flight articles. There was just one key difference: in place of the ablative heat shield, spacecraft 007’s was made of cork.

The first test in a natural body of water was the first delayed recovery test and it took place in the Gulf of Mexico. It was a run through to see what would happen if, after splashdown, adverse weather or rough seas kept recovery forces from collecting the crew from the ocean. The spacecrafts’s systems could give engineers technical data, but they needed human factors data as well and this meant the test had to be manned. In this case, the crew was three volunteer “astronauts” associated with the Apollo program: Texas M. Ward, head of the Apollo egress training program, fellow Apollo astronaut trainer Louis DeWolf, and member of the Apollo Landing and Recovery Division Harry Clancy. Each of these three men knew that sitting in for astronauts on this test would give them a unique perspective on their work, but none were sure what lay in store sitting in a spacecraft at sea for two days.

The test started on Friday, September 30 at 4pm once the main test requirement was met: the water was rough enough to produce the desired three to four foot waves. The three volunteers were strapped into their couches, the hatch was closed, and spacecraft 007 was lowered from the deck of the Motor Vessel Retriever.

The first part of the test was a test of the spacecraft’s ability to right itself. Spacecraft 007 was immediately flipped to upside-down its Stable-Two position (the thin end of the cone was facing down into the water and the heat shield was facing the sky), which left Ward, DeWolf, and Clancy suspended from their harnesses. Before long, the spacecraft’s two electric air compressors inflated the three uprighting bags, flipping the command module to its Stable-One position, the upright (heat shield down) position that had the stand-in astronauts lying comfortably in their couches. 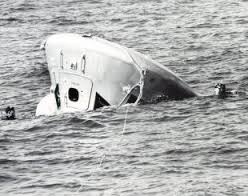 An Apollo spacecraft righting from Stable-Two.

This first objective achieved, the less exciting duration test began. Spacecraft 007 drifted south for 24 hours before starting to move parallel to the coast while a weather front moved through the test area generating waves 12 feet high. All the while, the Retriever was nearby keeping an eye on the spacecraft and establishing voice communication with the crew at least once an hour on the hour. As would be the case on the first two manned Apollo missions, one man out of three men was awake at all times to monitor the spacecraft systems and keep the test operators in the loop.

The test ended on Sunday night, and for the crew this meant a very welcome shower, shave, and steak dinner. The three men unanimous agreed that the test had overall been quite a ride. Especially when things got rough during the flip to Stable-Two and when the waves picked up; during these dynamic moments there was little for the volunteer astronauts to do but hang on. But more importantly, the spacecraft had weathered the rough waves and lengthy float very well. Ward noted that the Apollo spacecraft was a far better boat than the Gemini spacecraft, more stable and comfortable. All in all, the test subjects agreed it was a “pretty seaworthy craft.”

Within a year, a major change had hit the Apollo program that affected the results of this delayed recovery test. In the aftermath of the Apollo 1 fire in January of 1967, there were a slew of changes made to the spacecraft including a change to a new, safer, unified hatch. And the new hatch meant another round of post-splashdown qualification tests. Spacecraft 007 was sent back to the North American’s facility in Downey, California, retrofitted with the unified hatch, and rechristened spacecraft 007A. Then it was sent back to Houston for another delayed recovery test. 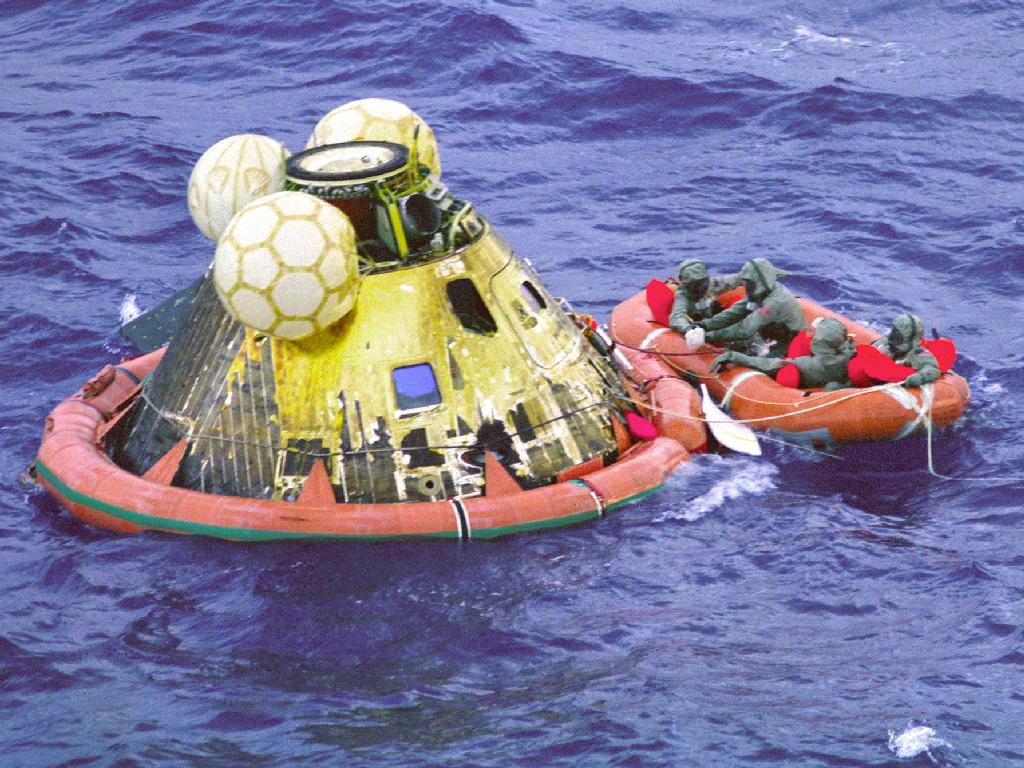 The crew on this second two day test in the Gulf of Mexico were astronauts Jim Lovell (who flew on Apollos 8 and 13), Stu Roosa (of Apollo 14), and Charlie Duke (of Apollo 16). The test, which ran from April 5 to 7, 1968, followed the same basic structure of the previous one: a 48-hour test of the spacecraft’s post-landing systems with the crew waiting patiently inside. And the crew report was more or less the same: save some communications problems between the crew and nearby recovery forces during the test, it confirmed that the Apollo spacecraft could adequately support a crew of three men during a 48-hour recovery delay. Should the crew splashdown far from their recovery point or in dangerous waters, they would be fine, if uncomfortable, for at least two days; none of the astronaut were keen on the idea of taking the Apollo spacecraft sailing any further. This test’s success made it the final post-landing qualification test before NASA laucnhed its first manned flight – Apollo 7 – seven months later.

The two 48-hour recovery tests were surely among the least exciting and least glamorous tests leading up to the Apollo missions, but they were vital. After all, Kennedy did pledge the nation to landing men on the Moon and returning them safely to Earth. Ensuring they survived splashdown and recovery was part of the larger lunar landing goal.