Google Like A Jedi With ‘Star Wars: The Force Awakens’ App Themes

This is the Android you're looking for 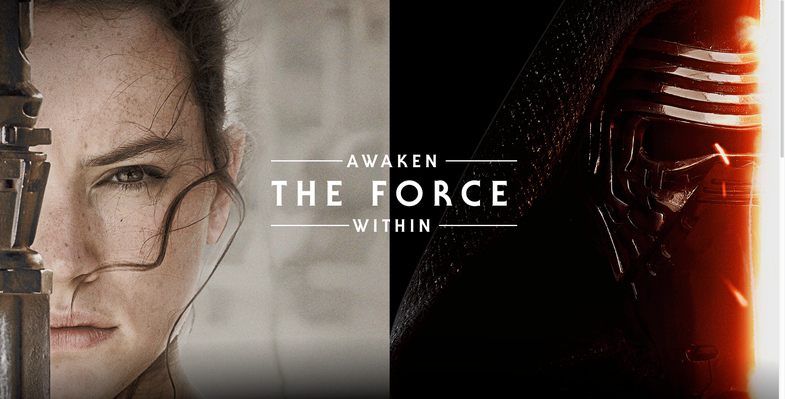 Disney is promoting Star Wars Episode VII: The Force Awakens any which way it can. Pre-ticket sales during Monday Night Football, Force Friday for fans of Star Wars mercy and numerous TV spots have those done their part to get everyone excited. Hype levels this strong could fuel a trip through hyperspace. Now the Mickey Mouse company is taking things even further by partnering with Google for a new set of Star Wars experiences across search, smartphones, even virtual reality.

Check out Google.com/StarWars, which launched today. The site greets users with a close-up of new Force Awakens characters Rey and Kylo Ren, wielding a staff and lightsaber respectively, their weapons-of-choice. Rey is used to represent the light side of the Force while Kylo Ren is, as you can probably guess, the Dark Side. Once chosen, your experience within Google’s apps — Gmail, Maps, Drive, Docs, Sheets, etc— will reflect your true nature. Light side Google users will see characters that align with those ideals, such as Rey, while evil users will see darker themes across their devices, replete with TIE Fighters and Stormtroopers. 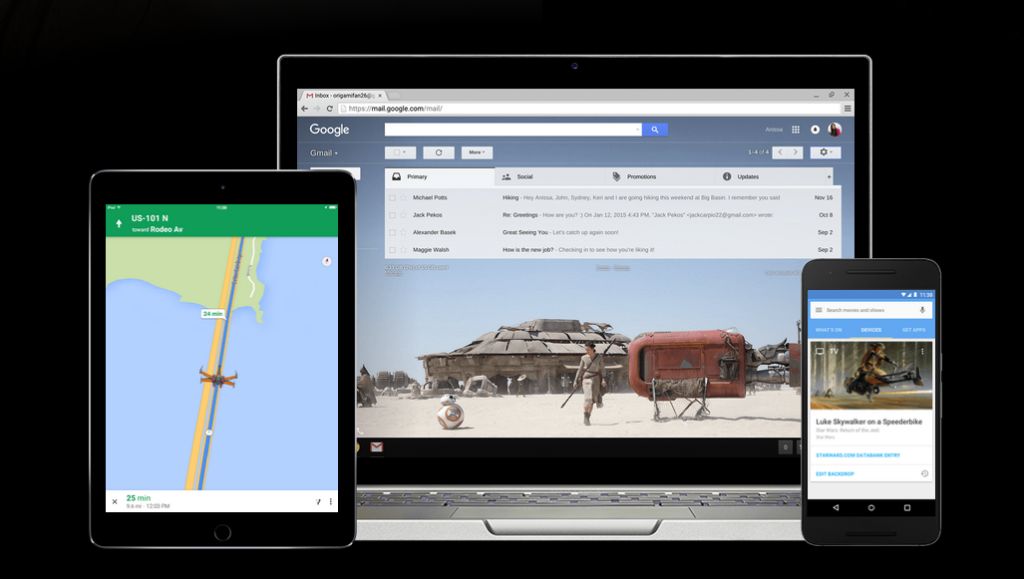 Along with Star Wars themed changes in Google’s popular applications, it seems the Force will also be awakening in Google Cardboard, the company’s budget virtual reality headset.

As Google notes in a statement released today: “Between now and the film release, we will be launching additional experiences including virtual reality on Google Cardboard and a Chrome Experiment.”

The company hasn’t offered any details regarding what kind of virtual reality experience we can expect. But being able to walk around the Star Wars Episode VII‘s environment, or hang out with the movie’s characters would only get movie-goers even more interested in the film. One clue as to what to expect could come from the official Star Wars 360-degree video posted to Facebook, which let users speed around the enormous wreckage of the Super Star Destroyer Inflictor on the planet Jakku (seen repeatedly in the movie’s trailers).

In the meantime, here’s what to expect divvied up by Google’s various apps:

-A light side (blue) or dark side (red) lightsaber will replace the standard loading bar.

-Your Gmail inbox background will transform and display light or dark side images, reflecting your chosen side.

-Set your course for the Hoth system… or maybe somewhere closer to home? Navigate to your destination with the help of a TIE Fighter or X-wing.

-Pegman, that little orange guy that tells you where you are in Google Maps, takes on a new form as a First Order Stormtrooper (Dark side) or Resistance Pilot (Light side).

-Beautiful Chrome browser background imagery via a custom Chrome extension, greeting you with a new image every time you open a new tab. More gorgeous than a binary sunset on Tatooine.

-Not so long from now, in a galaxy not so far away…. Key movie milestones added to your calendar, tailored to your chosen side.

-An epic collection of current and legacy Star Wars images for the biggest screen in your home when your Chromecast is on ambient mode.

-Now cards automatically appear in your feed with “this day in Star Wars history” fun facts.