A tuna robot reveals the art of gliding gracefully through water

It looks like a fish and swims like a fish, but it’s also a model that could inspire future underwater vehicles. 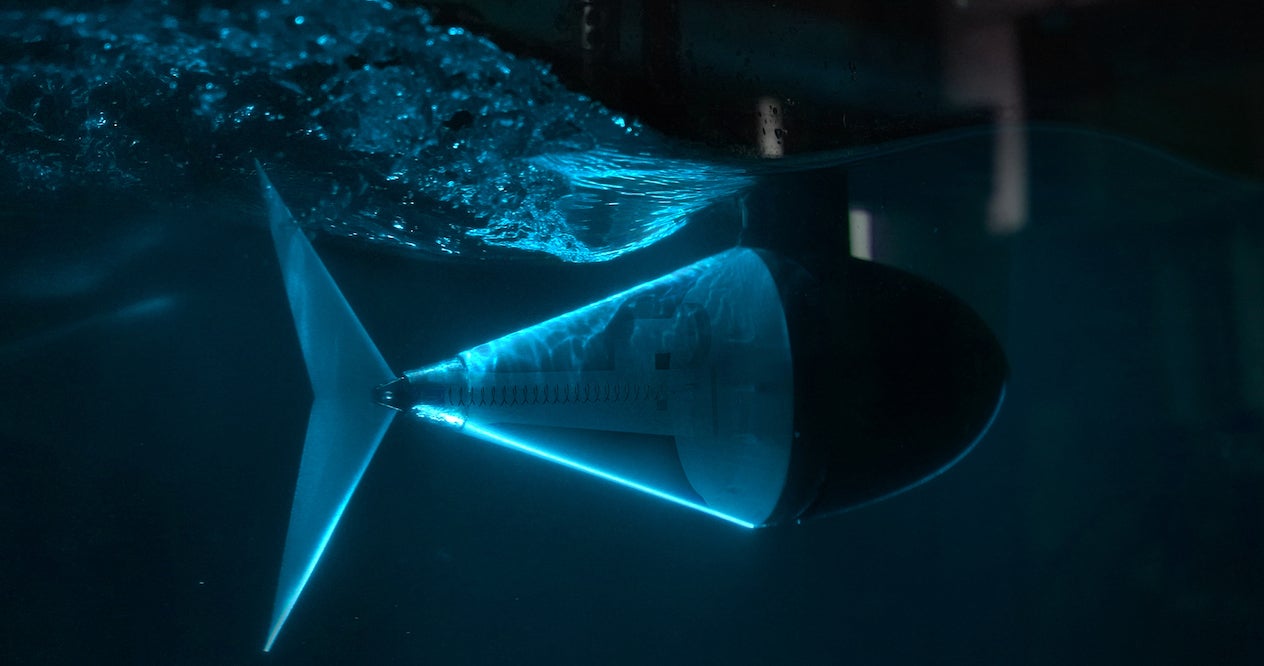 This tuna robot can change the stiffness of its own tail. Daniel Quinn / The University of Virginia
SHARE

At nearly 14 inches long, a new tuna-inspired robot created by researchers at the University of Virginia can flap its tail as fast as real tuna (seven times per second), and swim at speeds up to 1.5 mph, or two body-lengths per second.

In a new paper out in Science Robotics, the team behind this creation breaks down how they made this tuna-like robot—a machine that can tense up or relax its tail joint to move at different speeds. This mechanism has allowed the tuna bot to reach high speeds while also conserving energy, a method that could one day help improve swimming robots and even underwater vehicles.

Many robotic researchers have been piloting their own robo-fish. “We are different because we study the physics [of actual fish] instead of just mimicking the shape or schematic to build something like a real robot fish,” says Qiang Zhong, a postdoctoral researcher at UVA and the first author of the paper. The team analyzed videos of real tuna to derive the flow physics of its movements, and then used that to inform their design.

Fish use their muscles to not only generate motion, but to adjust how flexible or stiff their tails are to swim efficiently. They can tune their stiffness so they can be as floppy as a piece of paper or as rigid as a branch. This is similar to cars that improve their efficiency by changing gears for different driving speeds.

Tuna have tendons that run through their entire bodies, and when they put force on these tendons, they can stiffen their tails to swim faster. The team tried to emulate this muscle-tendon system with springs and motors.

“The research we perform is to try to understand the proportion theory of fish,” Zhong says. “We are not just building something that is like a fish, it’s more like we want to take the inspiration from the fish and understand what’s going on here and put this system into anything we want.”

Their final creation was a simplified robofish with high-frequency actuators (which approximated motion) and a spring system which converted the force of the spring to tail joint stiffness.

Nature as a muse for human-centered machines

The tuna robot is part of a niche family of biomimicry, or biomimetic robots, which are robots that imitate animals. Previous entries have included robots that were influenced by octopuses, manta rays, cheetahs, pigeons, and bats, just to name a few. Increasingly, researchers are looking to nature to provide guidance on how to make better robots. In fact, another group from UVA presented their tuna robot in Science Robotics in 2019.

Some soft robots can tune their own stiffness as well, through mechanisms like springs, actuators, artificial tendons, and motors. The soft robots with adjustable flexibility are the ones that can change their speeds most smoothly.

“In other robots, like walking robots, for example, they’ve tried to come up with stiffness tuning mechanisms, so there’s some precedent. We had to think about how we can put it inside a fish,” says Daniel Quinn, an assistant professor of mechanical and aerospace engineering at UVA, and an author on the paper.

The interest in fish bots in particular, Quinn says, stems from the fact that fish are so maneuverable compared to the best underwater vehicles we have right now; those are pretty clumsy and essentially able to go at one cruise speed in a straight line. “They have control propellers to position themselves, but they’re not really designed to do the loop-de-loops that fish do,” he says. “If you need to leave from a coastal outpost, swim for miles to an oil spill quickly, then slow down and do these tight turns to do some measurements or stand very still—currently our vehicles are very terrible at that kind of multi-modal mission.”

[Related: A fleet of winged underwater robots will patrol the seas for the US Navy]

Additionally, when operating in shallow waters, propellers can very easily get jammed by seaweeds and other marine gunk. Not only would a fish-like vehicle be able to glide through the underwater environment, this system can run at a lower frequency than propellers, so the noise they generate underwater is much lower comparatively. “It’s much more environmentally friendly, especially if you want to do some ocean resource investigation and swim near coral or other fish,” Zhong says.

The research, in part funded by the Office of Naval Research and the National Science Foundation, could lead to the next generation of underwater vehicles.

How the tuna is made

The tuna robot is segmented into two parts: a “head” that generates drag and a “tail” that generates thrust. An actuator sits in the front of the tail, and powers it by producing a back and forth motion that reverberates throughout the tail joint. The robot tuna is suspended from a rig and mounted on a platform of air bushings so it could “slide around like it’s on an air hockey table,” Quinn explains. “That means that we can study how this fish is moving around autonomously, but at the same time, we can take very detailed measurements because it’s not completely untethered.”

The tuna robot is controlled by an automatic, programmed code. That means that the fish could adjust how it swam in real time based on environmental conditions in a closed loop; the tuna was tested in a water channel that’s like a treadmill for the swimming robot. “We just crank up the speed so it’s having to swim faster and faster as the tunnel simulates faster and faster flow speeds,” Quinn explains.

The team sent the tuna robot on “missions” like a serpentine, 650-feet sprint, where it ramped slowly up from slow speeds to fast speeds.

Although the end result was impressive, the tuna robot is still only an early iteration of the tech that the team hopes to build. “You can see our tail is still rigid. But the tail on real fish, it’s made of muscle,” Zhong says. “They have almost infinite degrees of freedom.”

This is one of the key reasons why fish are so pliable. “For our system, right now we are limited. We can’t really generate fancy maneuvers like sea stars or brittle fish. To do that, you need to enhance and improve the degrees of freedom,” he notes. “In the future, we want to use some smart materials like artificial muscles to control the entire tail stiffness. If the artificial muscles are powerful enough, I could extend this to the entire fish. That will make our fish even more like a real fish, and reduce the noise that is generated by the other mechanical parts. That will make our system even closer to a natural system.”