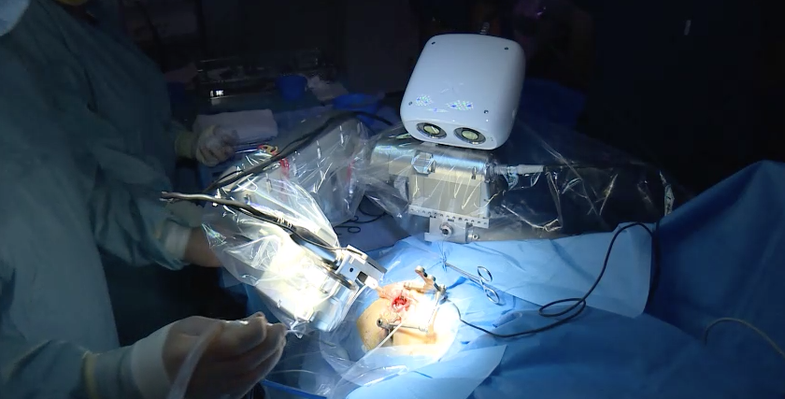 Imagine rolling into an operating room to find that your surgical team included a robot. While full-fledged robotic surgeons aren’t quite ready for the spotlight, automatons have already found a foothold in the surgical theater. Some systems allow doctors to control robotic instruments—ones able to slice and dice with inhuman precision—using controls or a computer screen, while other medical robots take a doctor’s place entirely to conduct specific segments of a larger surgery. Now scientists have taken a big step forward with the latter type of bot: in a study published Wednesday in Science Robotics, a team reports the first ever robot-assisted cochlear implantation surgery.

“We were on this project for more than eight years,” says lead study author Stefan Weber, a professor at the University of Bern, Switzerland’s ARTORG Center for Biomedical Engineering Research. “And in contrast to a lot of research, we really stuck to one application for the entire time.”

Indeed, Weber’s research had a laser focus: he and his team created a robot perfectly designed to drill a very thin tunnel into a human skull. In theory, their robot could be applied to other sorts of surgeries. But it’s designed to give surgeons performing cochlear implantations a major edge.

Cochlear implants, which are designed to improve the auditory capabilities of individuals with hearing impairments, work by picking up sound with an external microphone, processing it, and then transmitting that sound as electrical impulses—directly to the auditory nerve. Around 65,000 of them are implanted each year, often on young children.

To fit a patient with a cochlear implant, surgeons have to access the middle ear by drilling a 2.5-millimeter-wide tunnel through a chunk of skull surrounded by facial and taste nerves. Due to part to the difficulty of this maneuver, some 30 to 55 percent of patients actually lose some “residual hearing”—sounds they could hear despite existing problems with their ears—in the process of getting the implant.

“Humans are operating at the limits of their skill-sets, haptically and visually,” Weber says. “But if it’s designed right, a robotic system can operate at any resolution—whether it’s a millimeter you need or a tenth of a millimeter.”

So to him, cochlear implantation was a perfect candidate for a little automation. By addressing this one crucial step of the operation, he says, “a robot could really contribute a significant change in the outcome.”

After years of working on the robot’s design and creating safety mechanisms—including a pre-surgery patient skull analysis to personalize the robotic treatment plan and facial nerve monitoring to verify that the robot won’t harm surrounding tissues during the surgery—the robot saw its first use on a 51-year-old female patient last summer. Since then, the robot has assisted on three additional—and successful—surgeries. The patients in the clinical trial are still being evaluated to determine how much their hearing experience has been improved.

Now Weber’s team is working on using a robot for the last step of implantation—threading an electrode into the inner ear. They’ve had some success, but that stage requires a lot more tinkering and safety checks.

“I wouldn’t go so far as to say we could automate the insertion process,” Weber says, “but our aim is to optimize it.”

And while his team for now remains dedicated to fine-tuning and improving cochlear implantation, he does suspect that their robot might have other applications in the medical world.

“Let’s say structures that are rather small, in the brain or deeper inside the skull base,” he says. “We’re interested to see if we can expand it in the future.”