The top 11 innovations in recreation this year

Skis that fold in half, wool that glows, and a smokeless fire. 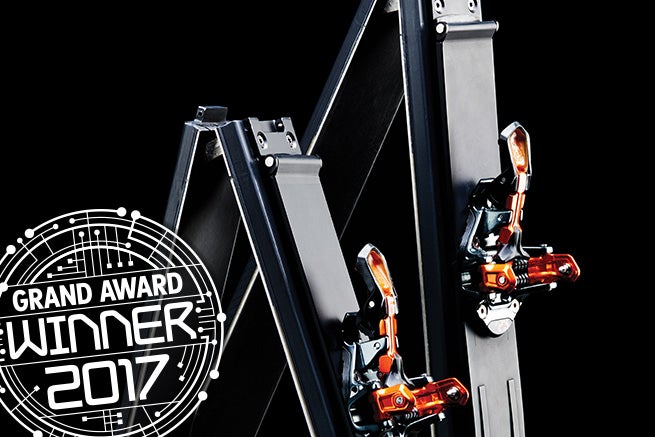 This article is a segment of 2017’s Best of What’s New list. For the complete tabulation of the year’s most transformative products and discoveries, head right this way.

Most bats approved for college and high-school leagues feature only an inch-wide sweet spot—that ideal location where the ball will rocket off fastest. Marucci machined this one with walls of varying thickness; each section, including the large center of percussion in the middle of the barrel, is calibrated to give the ball just the right trampoline effect. A vibration dampener keeps the impact from stinging your hands. $350.

Smartphones are powerful devices but need one pesky thing: infrastructure. This candy-bar-size gizmo liberates your handset from its dependency on cell towers. Bluetooth-pair one with your phone, and then beam messages over UHF radio waves to friends miles away who are also carrying the gadget. Because each antenna acts as a node in a mesh network, your range expands with each goTenna Mesh in the vicinity. $179 for two.

Flyleather for a tougher, greener shoe

Making sneakers out of leather is wasteful: About one-third of a cow’s hide can end up in the trash. To stretch this resource, Nike pulps the waste and reconstitutes it on a gauzy fabric substrate; the resulting recycled material is lighter and more abrasion-resistant. Plus, the company can add structural layers to engineer shoes in a way not possible with first-pass hide—and the carbon footprint is 80 percent lower.

Merino wool is a great athletic fiber: It keeps you comfortable in warm or cold weather. But textile engineers sweat while trying to get the cloth to hold a bright, saturated hue instead of a dull, sheepish one. To make this wool hoodie fluorescent, Voormi worked to chemically devise a custom dye formulation that jibed with the material, and also precisely wove in polyester fibers to add even more eye-catching neon pop. $229.

A series of sewn loops made of strong, lightweight fiber grip a rope tightly when they are weighted but relax when they are not. So when you’re done rappelling down a face, tug several times to liberate your line from its anchor up top. Another plus: If you’re in a tight spot, you can descend a single rope length instead of a doubled-up one, meaning you can cover twice the vertical distance.

Wings for your feet

New foam in Nike’s new kicks’ midsole sandwiches a curved carbon-fiber plate, giving joggers up to a 4 percent boost in running economy. Based on shoes custom-built for three pros trying to break the two-hour-marathon mark, maybe they’ll help you crack a 10-minute mile. $250.

Five years in the making, this new binding system is a novel alternative to the traditional strap-in approach. Using them is easy: Slide your heel into a connection point at the back, then click into loops on both sides of the toes. The result is a light, comfortable apparatus that’s almost as responsive as the high-performing straps and buckles—but happily won’t compel you to sit down in the cold snow to strap yourself in. $550.

A lightweight down jacket, with its duck-feather-filled pouches, can let the cold seep in at the stitches between the baffles. Eddie Bauer’s new garment solves that problem with a unique sheetlike fabric inside it. To create the insulation, Italian company Thindown bonded standard feathery clusters with a small amount of polyester to form a layer that keeps the jacket evenly toasty yet svelte. $279.

The smelly, smoky memory a campfire leaves on your clothes is the least fun part of an evening otherwise spent eating s’mores. The Bonfire’s venting system draws in air through the bottom to feed the flames, and also allows some to travel inside the double walls and ignite in jets from holes up top. The result is that this portable stainless-steel fire pit consumes its fuel so efficiently that there’s little ash or eye-stinging vapor. $300.

Nerf took its trademark foam darts into the wind tunnel and came out with a new vented tip that spurs them to spin as they cut through the air. That, plus redistributed weight, allows them to fly with a straighter, more-consistent trajectory. Designed to work with multiple blaster models, they might just boost your marksmanship. $8.

Grand Award Winner: Skis that fold in half

Extreme skiers who climb steep, chairlift-less slopes only to swoosh back down them contend with a unique problem: The long skis they’ve strapped to their backpacks make the ascent even more dangerous because the planks can get in the way of a swung ice ax or catch on an obstacle. Slovenian ski-maker Elan solved this difficulty by creating skis that do something simple but awesome: They fold in half without compromising performance.

The key to the system is the 2-foot-long aluminum-­alloy base plate that swivels out of the way to let the skis fold, and locks them solid and flat when they’re extended. Folded, they take up only about 3 feet on adventurers’ backs. Or, for the resort and après-ski crowd, they’ll fit easily inside the trunk of a normal car.

Best of What’s New was originally published in the November/December 2017 issue of Popular Science.