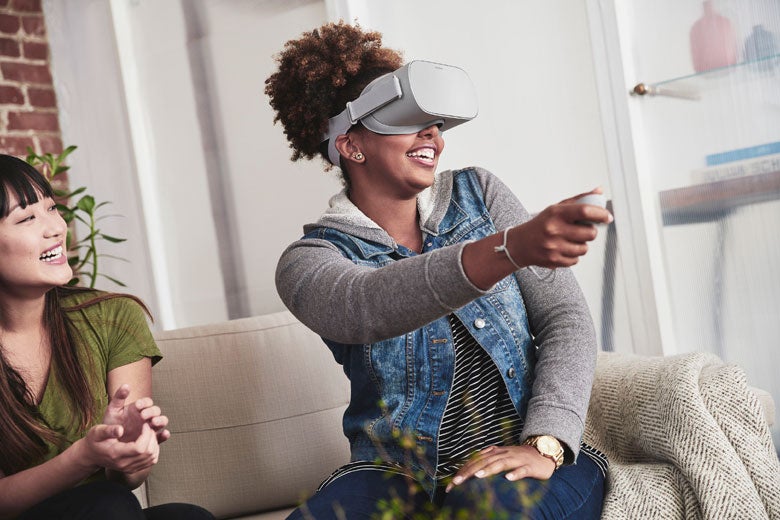 At its best, virtual reality is transportative: It will let you scale a simulated cliff face, or come face-to-teeth with a T-rex. You can have those experiences from your living room, but of course, you need a virtual reality headset, and for that, you have two broad categories to choose from—a low-end contraption that uses your smartphone, or a fancy rig that requires a PC.

But on Wednesday, Zuckerberg and Facebook-owned Oculus announced a new headset designed to fill that gap between the cheap and the pricey, and thus bring VR to more people—their goal is to get a billion involved. Called Oculus Go, it will cost $199 when it goes on sale next year. But you don’t need to wait for its release to strap a virtual reality headset to your face, and you don’t need to plunk down hundreds of dollars, either. Here’s how the new gadget fits into the VR landscape right now.

Your smartphone is the screen

At the most simple, a virtual reality headset is comprised of lenses and a screen. Low-end VR gizmos just make use of a display that we all carry in our pockets: a smartphone. The app showing content splits the screen down the middle, and each eye gets its own picture, like a modern ViewMaster. The result is an immersive experience.

While options start below $10 for cheap contraptions that will turn your phone into a headset, Google makes a simple one called Cardboard that it will sell you $15. Fold your phone inside it, and you’re good to go. You’ll just need to download an app that can display VR content—one free option from Google is also called Cardboard.

For the handy and ambitious, Google has even published instructions on how to build your own viewer out of lenses, corrugated cardboard, and other supplies.

The next step up from Cardboard is a device like the Samsung Gear VR, which also does the your-smartphone-is-the-screen trick. But unlike Cardboard, it features straps to hold the whole contraption to your noggin, and padding where it pushes against your face. It works with Samsung handsets like the Galaxy S8, and also comes with a handheld controller. Scoop the package up from Amazon for $129.

Google also hawks a $99 headset called Daydream View that works with Pixel phones, Samsung handsets, and others; like the Samsung Gear VR, it also comes with a hand controler.

A freestanding device, no computer needed

Then there’s the “sweet spot,” which is how Zuckerberg described where Oculus Go sits in the space. Instead of a Frankenstein phone-plus-headset setup, this standalone gadget includes its own LCD display that is “specifically optimized for VR,” Hugo Barra, Facebook’s vice president for virtual reality, said on Wednesday at the Oculus Connect event.

They want this headset “to deliver the best visual clarity of any VR product we’ve ever built,” Barra said. It should be available early 2018, and unlike the previous options, you’re not paying for what’s essentially a cardboard or plastic box with lenses that holds your phone—you get a self-contained device with all the components for VR, including sound from built-in speakers.

But the forthcoming Facebook/Oculus product is not the only venture working towards this sweet spot; Google, together with HTC and Vive, is making a standalone VR headset that it says is “coming soon.”

Long story short: If you’re interested in virtual reality, are willing to wait, and happy to spend around $200, Oculus Go-like devices in this category will almost certainly feature a better visual experience than a smartphone-plus-headset contraption could ever create.

For a VR device to be most powerful, it needs the processing power of a desktop, at least right now. In this category are systems like the $399-Oculus Rift, which requires a Windows machine that, among other requirements, packs at least 8GB of RAM.

The Rift package includes hand devices called Touch controllers, as well as two freestanding sensors that help translate the real-world motions of the Rift headset and controllers into the virtual landscape.

Of course, the Oculus Rift isn’t the only high-end VR system on the market: there’s the powerful $599 HTC Vive, which also needs a PC tether, as well as the Sony PlayStation VR, which, unsurprisingly, requires a PS4 to work.

Finally, the Facebook/Oculus crew is working on one more thing: a new standalone headset called Santa Cruz. It uses four sensors on the outside of the headset itself to keep track of the positions of two hand-held controllers, giving the user what Oculus calls “hand presence” without the need for additional sensors in the room.