Vinyl is back. But until now, record-making has been stuck in the ’80s.

Modern machinery for the vinyl renaissance 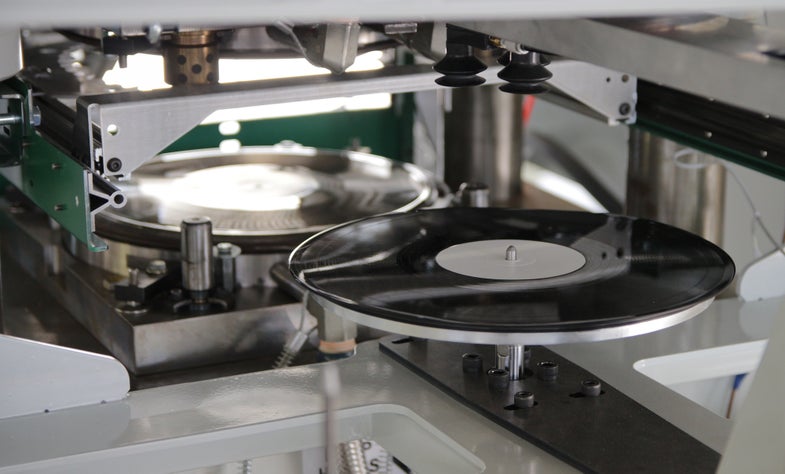 A newly pressed record awaits a robotic arm, which will move it to a spindle for cooling. Viryl Technologies
SHARE

Just over two years ago, Rob Brown was transfixed by an eBay auction. He and colleagues Chad Brown (no relation) and James Hashmi were bidding on a record pressing machine. It was the only one the new entrepreneurs could find, and it was in the middle of nowhere—in Russia. No one knew if it worked, or could even be refurbished back into working order. Yet, the bidding was feverish: Brown’s team walked away, but the press ultimately sold for some $60,000.

So went the shopping experience of anyone looking to open up a pressing plant amid the vinyl resurgence of the last decade. No company had made a new record press since the ‘80s, and used ones were nearly impossible to find. Longstanding plants, like United Record Pressing in Nashville (the largest facility in the U.S.), would absorb equipment from shuttering competitors. And upstarts would have to either wait out the second-hand market or build their own from scratch.

But Brown, Brown, and Hashmi wanted to get their hands on a press for a different reason. They wanted it as reference, a benchmark against which to measure the singular goal of their Toronto company, Viryl Technologies: to build the first new fully automated record pressing machines in over 30 years. Thanks to carefully orchestrated automation and cloud-based monitoring software, their WarmTone presses were going to be easier to use and simpler to service—and therefore more-efficient—than their hulking hydraulic predecessors.

Even in the best circumstances, making a record is a laborious process. There are machines to cut studio recordings into a master version of the audio, then another set to create a metal negative plate of the master for the giant waffle iron that is a record press. The biggest piece of the puzzle, literally and figuratively, is the pressing machine itself, which stamps out copy after copy after copy.

The number of workers trained to use and repair the machines dwindled when record sales bottomed out and plants began shutting down in the early ’90s. Facilities that did retain skilled pressmen held onto personnel (and their expertise) with a firm grip. “There’s just not a lot of people doing it,” says Jonathan Berlin, owner and partner at Vinyl Record Pressing in Atlantic Beach, Fla. “The people that are doing it want to be the only ones doing it.”

Workers learn the ins and outs of their machinery, its quirks, and its red flags. And, because most plants contain a mashup of presses—recycled, revamped, and reengineered with modern components—there’s little, if anything, in the way of manuals or guides. “Because the industry had died off, and the companies that produced the presses were all long gone, there really is no level of service left,” says Rob Brown, Viryl’s chief operations officer. Breakdowns are common, and fixes tricky.

This largely bespoke approach has contributed to a problem: For years, vinyl production has been at or over capacity. According to U.K. research firm Deloitte, total record sales in 2017 will hit 40 million worldwide. And Nielsen’s 2016 Year-End Music Report showed the eleventh straight year of consistent upswing. That’s a lot of discs for the few dozen up-and-running plants and couple hundred or so working presses worldwide.

It’s so many records, in fact, that about two years ago United stopped taking on new clients for about a year to clear up its backlog and shorten turnaround times. For smaller shops and upstarts, backups are harder to manage—and sometimes exacerbated by the run-up to major selling seasons, like this Saturday’s Record Store Day, a global event celebrating local music retailers.

That’s why Viryl believes its quest to modernize record production is so important. “This is a craft that must be honed over years, and we’re trying to apply science to it, because, in the end, that’s really all it is,” says Brown. 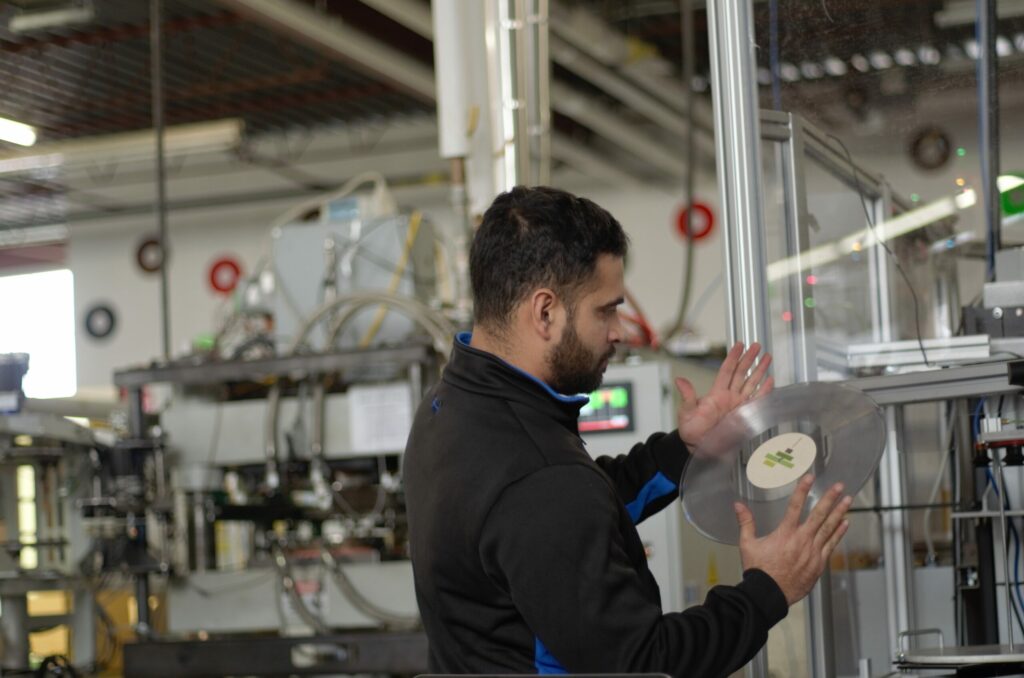 An Viryl engineer eyes a disc hot off the WarnTone press.

After two years of development, the first four $195,000 WarmTones began spitting out records in October 2016. Two presses belong to CD and DVD plant Microform Services in Toronto and the others to Hand Drawn Pressing in Addison, Texas. “It’s really cool to have new stuff that’s not going to break,” quips Dustin Blocker, Hand Drawn’s co-founder and chief creative officer.

For Blocker and his team, this is their first time running a pressing operation. According to Viryl, the decision to sell to newbies was deliberate, allowing them to get a sense of the challenges they would face in getting a new wave of operators online.

The good (and bad) news for newbies is that not much has changed in pressing tech in the last half-century. Records start as chips of hardened PVC, which pass through temperature-controlled tubing to melt. From there, an extruder screw injects the softened plastic into a pre-mold that forms the thick biscuit that will eventually get pressed into a record. Cartridges then place the labels on the top and bottom of the biscuit, a pin fires through the center, and arms move the three pieces into the press together.

By the time the biscuit reaches the pressing plates, everything is heated to 300 degrees, which makes the molding process easier. After a high-pressure squeeze, the mold begins to cool, allowing the newly-minted record to release, but not warp. An arm moves the record to a trimming station, where excess edges get snipped away.

On a WarmTone, the process takes 24-to-26 seconds per record. On an older machine from Toolex or Southern Machine Tools (SMT), the average is around 35.

Two factors contribute to the WarmTone’s swiftness. First, Viryl has made a series of mechanical updates to conventional hydraulic press design; for example, their extruder screw is less prone to hotspots that can overcook the vinyl, and robotic rather than human arms stack records for cooling. Second, a battery of sensors throughout the press feed data on temperature, motion, pressure, and timing to an onboard computer, a companion app, and the cloud. “The idea is that we can use the collective data of everybody running to presses to help run [them] even better,” explains Brown.

The core of Viryl’s pitch is its quality-control software, called Adapt. Data from sensors throughout the press stream to a touchscreen display in real time, so operators can get a read on their settings and tweak them as needed. If there’s an issue they can’t solve on-site, a Viryl tech in Toronto can peek at the numbers, suggest fixes, and even push firmware updates if the problem is the software itself.

Already, Adapt has allowed Viryl to spot and fix software malfunctions across all its presses. Early on, for example, the robotic arms weren’t stacking cooling plates between finished records properly. The problem, Brown recalls, wasn’t a mechanical malfunction, but rather that the machine was too slow to recognize it had completed its task, which caused a fault and a full system shutdown.

Quick fixes have helped Blocker and his team at Hand Drawn produce records with very little interruption. “By the time we call Canada to try to put in a ticket, they already have a solution,” he says. “If something’s messed up, it’s probably one part of the machine that’s not firing correctly by a millimeter here or there; [Viryl] is able to go find those trigger points and solve them—usually within minutes.”

This efficiency translates to less downtime (Viryl claims 5 percent, and Blocker thinks that’s a fair estimate), fewer records lost to imperfection (Blocker says only about one percent of his records show defects, whereas some plants have rates as high as 40 percent), and faster overall production. Before installing their WarmTones, Hand Drawn farmed out manufacturing and produced a max of around 5,000 records a month; today, they can churn out 3,000 a day and are on track to press 1.8 million by year’s end. 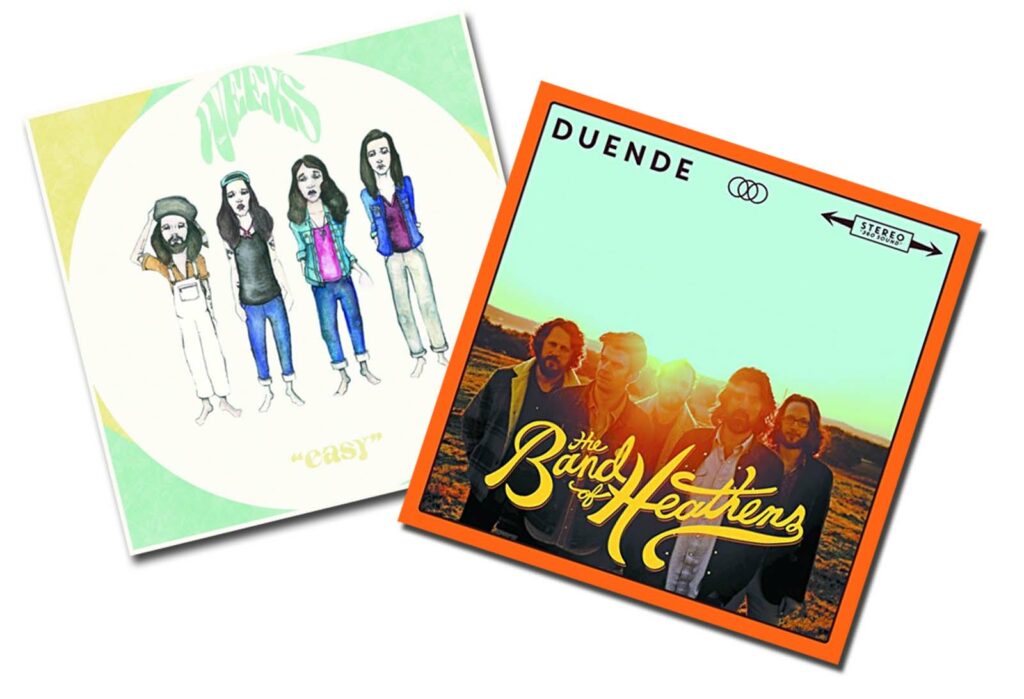 “Easy” by The Weeks and “Duende” by Band of Heathens are among Hand Drawn Pressing’s first WarmTone-made releases.

Virly plans to ship at least 10 more presses—what Brown refers to as WarmTone Mark II—this year. Those units will include a full stack of software updates, and a handful of design upgrades, such as pre-attached hand guards, that will expedite installs.

Among the anxiously-awaiting recipients is Eric Astor, chief of Furnace Record Pressing in Fairfax, Virginia. His pair of WarmTones will work alongside ten refurbished automatic Toolex machines bought off a plastics manufacturer in Mexico and eight built-from-scratch semi-automatic presses. “They’re nice, new, shiny machines,” he says, “and we hope that they’ll do the same thing as our Toolex Alphas, but maybe a little faster and with a little bit more computer [savvy].”

Regardless of their methods, plants are universally concerned with quality control—making sure that every copy of a record sounds the same. It’s a common practice to play every 100th or 150th record off the line, a habit Hand Drawn still maintains on its WarnTones.

But no human ear is perfect, so Viryl is also developing a type of digital ear, that will listen to records and help spot imperfections. Initially, their goal is to compare the quality of their pressings to those from older machines, and plans to roll it out beyond that are still formulating. “It allows us to measure the signal-to-noise ratio,” explains Brown, “It’s really interesting for us to be able to map all the pops and clicks and tell if they’re the same from record to record.” Random ticks mean defects created by mistakes in the pressing process; consistent ones mean true copies of the studio master.

Ultimately, new blood bringing new ideas—and revamping old ones—will allow the vinyl industry to avoid getting overburdened into churning out sub-par product. “I think it’s a big deal to hold up our end of the bargain,” says Blocker, nodding to a reported dip in quality as plants have struggled to keep up with rising demand. “It’s really our responsibility to make awesome-sounding records that can hold the test of time.”