Surprisingly, most parts come right off the shelf of the bike shop. 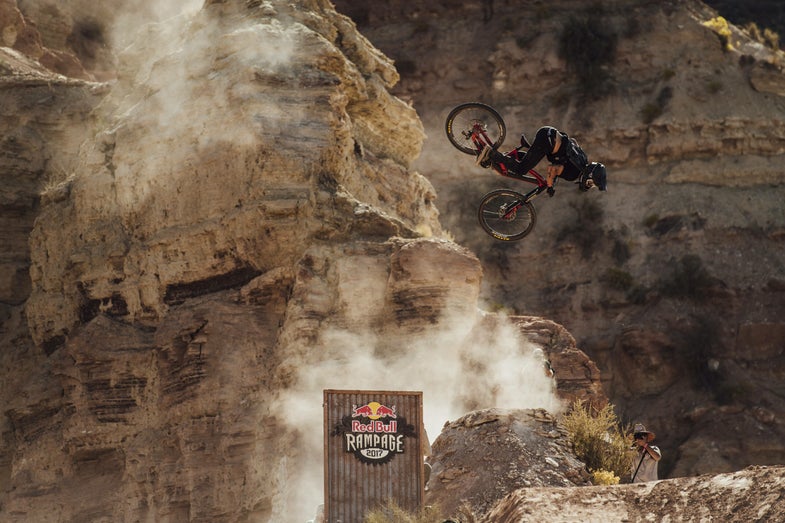 Think back to childhood and that nervous—even scared—feeling you had in your stomach before bombing a steep hill on your bike. Crank that feeling to 11,000 and you still won’t match the insanity of big mountain freeriding. The biggest event in the sport is Red Bull Rampage, an annual competition in which the best riders in the world head to Utah to literally huck themselves off cliffs.

How do these riders—and their bikes—survive such brutal impacts? A lot of it has to do with the skill of the pilots and their ability to land smoothly after jumping a canyon. But, the bikes still take a beating; it requires a lot of engineering and rugged materials to withstand that kind of punishment. You can, however, walk into a high-end bike shop and almost all the components—except for the total lack of fear—right now.

Mountain bikes with suspension on both the front and back wheels first showed up in the neon-soaked early ‘90s. Back then, just a few inches of travel on each wheel absorbed bumps that would otherwise be transferred to riders’ hands or sit bones (which is the fancy way cyclists say “butts”). In 1995, the RockShox Judy DH fork was the burliest around, with just 3 inches of travel. Now, full-suspension bikes typically boast eight or more inches of travel on both wheels.

This year’s Rampage winner was Kurt Sorge, a 28 year-old rider from Canada, and also the 2015 champ. His Polygon Collosus bike was running a Cane Creek Double Barrel DBCoil shock at the back wheel. It’s a totally stock piece of gear that you could buy retail right now, but Sorge’s has an impressive lineage. “Kurt [Sorge] actually won Rampage last time on that exact same shock,” says Jim Morrison, director of engineering from Cane Creek. “We serviced it at the beginning of the year, but it’s the same hardware.” Combined with the bike’s frame, it gave Sorge 8 inches of travel at the back wheel.

More travel in the suspension means it can absorb more energy from a landing before it transfers to the rest of the bike or your body.

The rear shock on the bike consists of a piston that moves through oil as it compresses and rebounds. A sturdy spring surrounding the piston controls the movement. This is a standard piece of kit for aggressive mountain bikers, but the impacts of Rampage require a distinctly different setup process.

“Kurt [Sorge] probably weighs around 150 pounds, but he’s using a spring that would typically support a person who weighs 300 pounds, or maybe even more,” says Morrison. The titanium spring—most offer steel, which is heavier, but much cheaper—helps the shock compress in a linear progression, meaning it doesn’t get harder to squish the further down it goes. This makes the bike ride in a more-consistent and predictable way on the trail.

That extra spring strength on Sorge’s bike helps prevent the suspension from running out of room to compress (known as “bottoming out”), which can lead to catastrophe. “If you go through all your travel, you hit the bottom of the shock with a lot of force, which gets transferred to your wheels, your frame, and ultimately your legs,” says Morrison. “You only really want to bottom out when something went wrong and you needed all of it to save you.”

Oil valves inside the shock slow down the rate at which the piston bounces back after compression. This is called rebound damping, and it’s what prevents that heavy spring from catapulting the rider like a pogo stick over the handlebars.

A stock suspension fork from SR Suntour called Rux cushions the front of Sorge’s bike. It also uses an unorthodox setup. “You wouldn’t want to ride Kurt [Sorge]’s bike for more than a minute,” says SR Suntour’s Dan Dacko. The fork is so stiff that the bumps in a regular trail would hurt your hands.”

Long rides on typical trails with this setup could result in what’s called suspension packing, in which smaller bumps gradually squash the shock without giving it time to bounce back. Packing reduces the effective travel, negatively affects the geometry of the frame, and ultimately leads to a choppier ride.

Sorge’s fork has two 38mm diameter aluminum stanchions that sink into magnesium sleeves called lowers. The right stanchion contains a cartridge with valves for controlling damping, while the left stanchion is pressurized to create an air spring that replaces familiar metal coil. A typical ride of Sorge’s weight might use roughly 50 PSI worth or pressure, but for rampage, that number would grow to over 85 PSI.

Unlike spring shocks, air has a progressive compression curve—it gets harder to compress the more it’s squished—which many riders prefer, especially on ramps. “The most force the fork will be subjected to happens during the take off on a jump,” says Dacko. “Without the right amount of pressure, the fork compresses too quickly and messes up the bike’s geometry.” An improperly configured fork will try to absorb the lip of the jump rather than allowing the rider to boost off of it, which means less distance and possible catastrophe.

Like the shock, the fork employs high rebound damping to reduce the speed at which the fork bounces back after big hit.

Ultimately, both sides of the suspension on a bike built for this purpose are overly stiff for just about anything else. Typically, manufacturers recommend that simply sitting on a bike should compress (or “sag” in MTB parlance) the fork and shock by roughly 25 percent, so it can extend and compress to stay in contact with the trail. A bike like Sorge’s would likely give 10 percent sag or less, which translates into an extremely bumpy ride.

Carbon fiber is the material of the moment in just about every segment of the bike market for its weight savings over aluminum and its superior stiffness, and this one is no different. Trek, which provided the Session 9.9 DH bike for 2016’s winner, Brendan Semenuk, crafted a fully carbon frame with custom geometry to accommodate the 26-inch wheels.

Trek tests its carbon frames with more extreme measures than its other carbon frames to ensure they can withstand the rigors of intense impacts.

My @trekbikes Session Park 9.9 for this years @redbull Rampage | ? @iancollinsphotography

27.5-inch wheels are popular in the bike world right now, but many Rampage riders opt for the tried-and-true option of 26-inch aluminum hoops to keep the wheelbases short—better for doing spinning tricks on the course. Sorge was riding the Hope Tech DH-Pro 4 wheels, which have 32 spokes and a 28mm wide inner diameter. That’s a standard number of spokes for an MTB tire, but consider that Hope’s pro cross-country wheel, which is meant for lighter hits, is just 19.5mm wide on the inside. The wider rims distribute the force of the impact over a larger surface area to increase durability.

Internal metal structures support the rim and the walls are reinforced with thicker metal to prevent the whole thing from turning into a wheel taco during a sketchy landing.

For his winning run, Sorge ran Deity Bladerunner pedals, which are actually the thinnest pedal the company has ever made. It sounds crazy when we’re talking about cliff hucks, but there’s a reason. At 11mm thick, these pedals give the bike more ground clearance, especially when the suspension is compressed, so they won’t get caught on a rock, root, or any other junk that may be on the trail.

The aluminum pedals have 10 threaded pins on each side that stick up and bite into the rider’s shoe to prevent feet from slipping off. Machined grooves in the pedal bodies further increase traction by cutting down on smooth surfaces.

Brakes are crucial for controlling speed in addition to stopping, which is why bikes at this kind of competition—and in serious downhill racing environments—use hydraulic disc brakes with big, 8-inch rotors. When you squeeze the brake lever, hydraulic fluid pushes calipers with metal or resin pads into steel discs to generate friction and slow you down. The discs have holes and radiation fins to help dispense the heat created during the braking process. When discs get too hot, brakes start to lose power (known as fading), which can be very bad news. When the brakes are fresh, however, they typically only require one finger to pull the lever and provide impressive stopping power.

Shimano Saint brakes are a common option for big mountain riding because they use four ceramic pistons to push the pads against the discs. Many typical MTB brakes only use two, which means less power pushing the pads.