The Fall Creators Update is here for Windows 10 and it's heavy on the Mixed Reality elements. 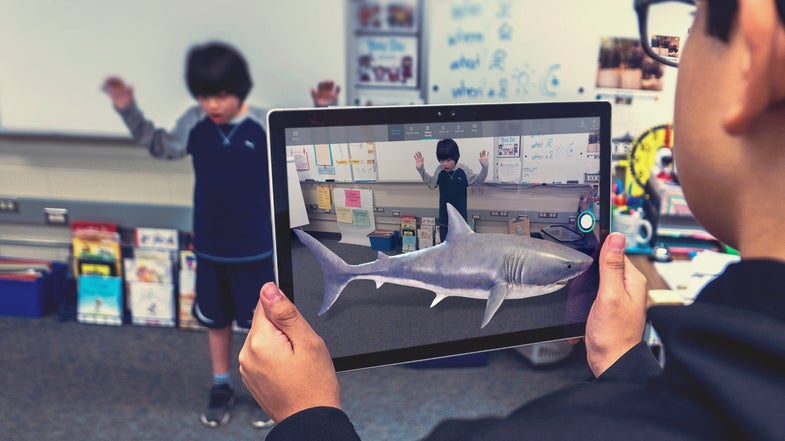 The Windows 10 Fall Creators Update is just starting to make its way to the public, and while most new OS versions are about as exciting as pleated, beige pants, this one has some key features Microsoft has been hyping all year.

Mixed reality has been a big talking point for Microsoft all through 2017. The company is putting a lot of emphasis on the platform—it’s a mixture of augmented reality, that overlays interactive virtual objects into the real world, and traditional VR, which transports the user to an entirely different place. Mixed Reality is now a fundamental part of the Windows 10 environment across all compatible devices, and it officially starts with the latest update.

The home base for Mixed Reality is a virtual home called the Cliff House and makes navigating windows more like walking around a swanky dwelling with a nice view. Want to watch a movie? Head into the home theater. Want to use regular windows apps? Head over to the virtual desktop and get a 3D Windows experience.

To get the full-on Mixed Reality experience, you need a headset like the ones made by Lenovo, Dell, and Acer. Unlike typical VR headsets, these have a pair of cameras on the front to capture actual reality and bring it into the virtual world. Motion sensing controllers in your hands let you navigate around the virtual Windows world, but you will still want a real keyboard to do much typing.

If you don’t need the full immersive experience, however, you can use a Windows 10 PC or tablet with a webcam as a Mixed Reality Viewer. You point the camera at a scene and virtual objects will appear on the screen as if they’re real, a pretty standard augmented reality experience like you get from Apple’s ARKit.

Right now, the challenge is finding enough interesting stuff to actually do in Mixed Reality. There are a few games out there like Halo Recruit VR, but overall support is spotty. It’s early in the platform’s lifecycle, though, and some bigger partners are on the way, including massive online game seller, Steam. They should be up and running to dish out VR content by the end of the year, at least in beta form.

While Mixed Reality is the major update for the Windows 10 Fall Creators update, there are some other features worth noting. Here’s a rundown of things to look out for after you install it.

Fluent Design You’ll notice that things look different in the new version of Windows, and that’s thanks to Microsoft’s switch to what it calls Fluent Design. You’ll notice new animations, blur, and a look that has a similar look and feel to the new Xbox Dashboard.

Controlled folder access to protect against ransomware Remember when the WannaCry ransomware attack tore across the world, capturing data and holding it hostage? Microsoft sure does, and this new feature monitors important folders (like those that contain pictures or documents) and blocks programs from modifying them unless you authorize them.

The stock Photos app now matches the rest of the fluent design scheme and also adds some dynamic effect options like animations and adding objects to photos. It’s a step away from pure photo editing and a step toward making photos into digital art. That makes sense now that MS Paint is no longer a bundled app and has been relegated to the Windows Store.

If you use Microsoft’s cloud storage service, OneDrive , you can now see the files—even the ones stored only in the cloud—through the Microsoft file system.

I lose the Surface Pen all the time, but there’s now a feature that will show you the last place you used it as long as you have your location services on. It’s not going to help when it’s buried under dozens of flash drives in my office drawer (this happens a lot), but it will help if I actually forget it somewhere.

Most of the other updates are typical minor OS stuff that fixes bugs and integrates other features that I don’t use much. You can see the whole list here on the Microsoft site. If you haven’t downloaded the new software yet, you can do so here.