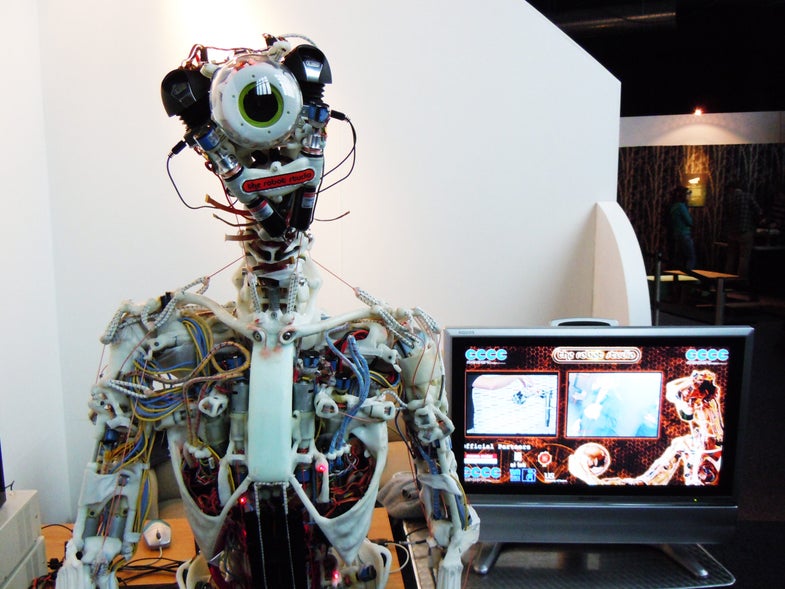 Scientists are already growing muscles, bones, and mini-organs in the lab. But these tissues are generally small, simple, and kinda wimpy. That’s partly because a Petri dish is no match for the human body.

Take, for example, skeletal muscle. Bioreactors—typically warm, moist vats where cells are grown—might induce some simple movements in lab-grown muscles, but it’s nothing like the multidirectional bending and stretching of the human body, which helps our muscles grow and get stronger. That’s why two scientists from Oxford University are proposing that we use humanoid robots to grow engineered tissues instead. Their article was published Wednesday in Science Robotics.

“There is no better bioreactor than the human body itself,” says study co-author and tissue engineer Pierre Mouthuy, “so the better we can copy that environment, the better our chances to obtain functional engineered tissues are going to be.”

Robots like Kenshiro and Eccerobot replicate human anatomy in intricate detail, and the authors write that we might be able to use them to grow better tissue grafts that can be transplanted into ailing humans.

For tendons, ligaments, bone, and cartilage, humanoid robots could simulate lifelike architecture and movements of various types and directions. This could help more cells to develop and differentiate into complex tissues.

What might these bioreactors look like? Perhaps scientists could immerse the robotic body parts in a bioreactor’s nutrient broth—but then you risk corroding the machine’s metals or ruining its electronics, says Mouthuy. Another solution may be to encase the engineered tissue in a membrane or artificial skin, so that the developing tissue can have all the moisture and nutrients it needs, while the robot stays dry. Mouthuy and study co-author Andrew Carr are already working on some prototypes, and hope to soon find out whether the humanoid bioreactor concept is actually feasible.

If they work, humanoid bioreactors might eventually be able to nurture more complex tissues and organs, such as lab-grown hearts. Plus, they might lead to robots that are safer for humans to be around, the authors note, as well as other robots advances—such as “biohybrid humanoids,” whose movements are controlled by cells instead of machinery.