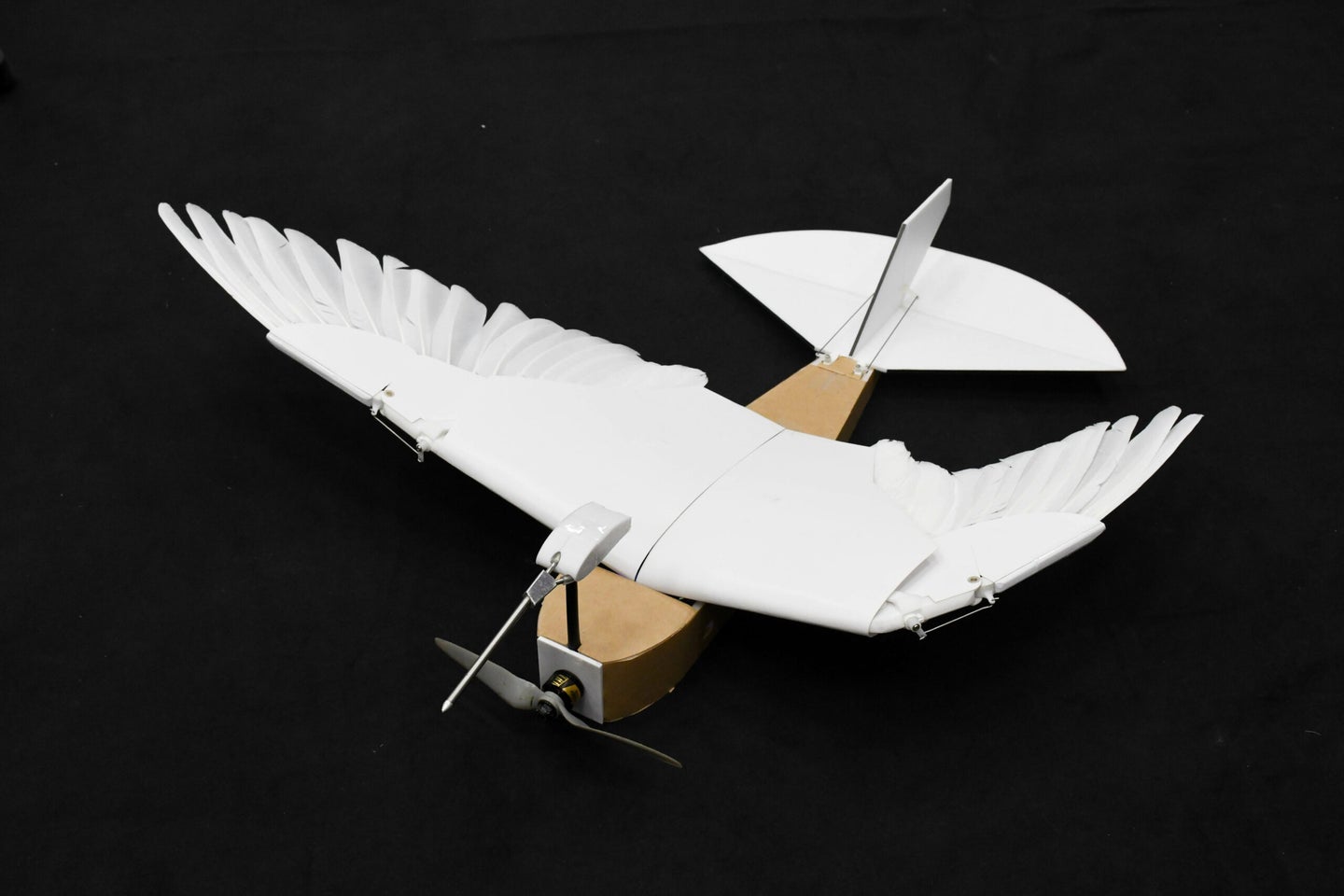 The PigeonBot is a combination of the biological and artificial. Lentink Lab / Stanford University
SHARE

Pigeons are so ubiquitous, they’ve earned the urban nickname of “rats with wings.” But they do have at least one thing going for them: They’re strong, muscular fliers, naturally suited to handling the gusty winds that blow between buildings.

And now engineers are turning to the species for research by adding pigeon flight feathers to an airborne robot. The resulting fusion is called, naturally, PigeonBot.

PigeonBot cleverly integrates tried-and-true elements of traditional flying machines with tried-and-true elements of evolution. The researchers behind the project weren’t trying to build a machine that flaps like a bird, which would be much harder to do from an engineering perspective; they were using the mishmash of the biological and the mechanical is to learn more about how avians fly.

“I really wanted to understand how birds change the shape of their wings,” says David Lentink, an assistant professor of mechanical engineering at Stanford University and a coathor on a new study in the journal Science Robotics.

A propeller pulls PigeonBot through the sky, and a fuselage and tail like you might see on a typical model airplane or commercial jetliner comprise the body. The difference, of course, is the wings, which hold 20 feather per side. (They’re white because they came from food-grade pigeons, known as squab.) To hold the feathers together on the artificial wings, the engineers used orthodontic rubber bands.

To control the bot, Lentink’s team gave PigeonBot motors—a pair per side—that can adjust each artificial wing and the attached flight feathers at two different joints. The researchers could then use a remote to move the wing, causing the robot bird to turn and bank. This mimics the way a real pigeon controls its trajectory in the air, although the bot’s wings don’t have all the movable joints and degrees of freedom an actual avian does.

“We determined that birds can steer using their fingers alone,” Lentink says. In fact, bird wings and human arms share some basic structural similarities: a wing has a humerus, radius, and ulna bones, for example. And at each wingtip they have finger-like anatomy that can move about 30 degrees, controlling their flight with subtle motion.

When working on the PigeonBot, Lentink and his students learned about the nuances of combining biological materials with robotics. One discovery he says is apparent in retrospect is that “you cannot exchange feathers between individuals” on a bot. In other words, the PigeonBot works best when its feathers all come from the same bird.

Incorporating feathers into a flying machine also requires some unique maintenance. “If they get ruffled, you can preen them,” he says. By that he means smoothing them by hand, which is different from the way birds preen themselves—they use their beaks to spread an oil over the feathers that strengthens and waterproofs them.

There are also some parallels between this unique feathered machine and actual planes; commercial and military aircraft change the shape of their wings in flight, to an extent. For example, during takeoff and landing, the pilot of an airliner like a Boeing 747 will extend the flaps and slats on the wings to create more lift, and moving surfaces such as ailerons permit the plane to roll and turn. Then there’s the F-14 Tomcat, which the US doesn’t fly anymore—it had mechanically complex wings that could change their position in flight, forward or backwards. But none of that can compare to a real bird flying, flapping and adjusting its wings with natural finesse.

Still, Lentink is certain that airplanes of the future could make use of morphing wings —perhaps a segment of each wing would flex in some way—by incorporating lessons from pigeons and other birds.

“You won’t see a feathered airplane like our robot,” he says, “but you’ll find smart materials in them that have similar properties that better match the engineering constraints and achieve more of what birds do than current aircraft can.”