In the interest of not burying the lead: MIT is developing inflatable robotic tentacles, motor-free limbs that are able to... 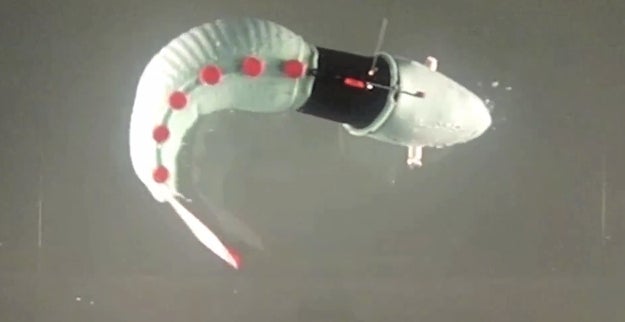 In the interest of not burying the lead: MIT is developing inflatable robotic tentacles, motor-free limbs that are able to flex and grip in response to targeted bursts of air. But the inspiration for those undulating components is a fish. And that’s the more appropriate bot to start with.

As robots go, MIT’s new autonomous fishbot is a relatively humble, single-minded machine. It was created to curve, with a flexible, silicone rubber tail that uses carbon dioxide to power its wriggles and flaps. Each release of gas inflates one half of the tail, curving it. With alternating right inflations, the robotic fish will swim along. It’s a neat approach to locomotion, but not the machine’s real speciality—it bleeds fuel with each movement, and the onboard CO2 tank isn’t large enough for sustained, long-distance swimming. What makes this robot interesting is what it can do in an emergency, because of its soft body.

Real, biological fish can perform what’s referred to as an escape maneuver, an extremely rapid turn intended to ditch pursuers. MIT’s robofish can do the same, using a powerful burst of CO2 to quickly whip its body to one side, turning as much as 100 degrees in roughly 100 milliseconds. It’s a high-performance move for any kind of robot, and further evidence of the importance of being soft.

The established advantages of soft bots are easy to guess at. Researchers at iRobot and Hiroshima University have shown off machines that ooze around, deforming in genuinely unsettling ways to through narrow openings, or with a minimum of sensing and control algorithms. A robot that’s soft, in other words, might navigate its environment with fewer snags and stumbles than one that’s hard and hard-edged. The other obvious benefit of softness is safety—a squishy bot might be able bump into things or people without inflicting damage.

What MIT’s robotic fish demonstrates is less obvious: being soft can ramp up performance. A rigid system might be able to pull off something similar to the fishbot’s escape maneuver, but it would require far more mechanical complexity, and possibly some help from propellers. By deforming along its entire length—not bending at right angles, but throughout the soft structure—the flexible tail optimizes its underwater pivot. It moves fast, and with power, without relying on a fast, powerful motor.

Daniela Rus, director of MIT’s Computer Science and Artificial Intelligence Laboratory, hopes to test the fish in open waters this summer, preferably in a coral reef environment, where the machine’s agility could be an asset. “We want to see what kind of new information we can get, inside a complex environment,” says Rus. The fish might allow for observation of real schools of fish, without disrupting or alarming them. And there are other, more obviously commercial applications for a similar system. “If you’re talking about pipe inspection, there’s the possibility to go inside the pipe, as well as outside,” says Andrew Marchese, an MIT grad student and lead author of the fishbot paper. “With fish-like locomotion, you’re not limited by a traditional propeller. So you could swim in oil, or a medium of some viscosity.”

But whatever its role in oil or water might ultimately might be, the fish tail could hold even more promise on land. Along with developing the fishbot, Marchese and the rest of the MIT team have been working on a soft robot arm, whose linked segments closely resemble those flexible tails, and that also curve through inflation and deflation. And like the fishbot, this tentacle can be fabricated far more easily than a standard, motor-driven robot, by pouring rubber into 3D-printed molds. “We’re not spending our time installing screws and bolts and precisely machining things,” says Marchese. “Once your designs are stable, and you have the mold, you cast these robots.”

The full details of the inflatable tentacle will have to wait until May, and the presentation of the related paper. And though the initial device is relatively straightforward, curving in two dimensions, the approach could be integral to the creation of soft bots that work alongside people, foregoing motors without sacrificing performance. “Baxter has software mechanisms that make it safe,” says Marchese, referring to the humanoid menial laborer from Rethink Robotics, and its ability to freeze when humans approach. “Ours has safety inherent to its design.”

There’s one more possibility, afforded by gas-filled, high-performance tentacles. Attached to a bot that’s similarly light and soft, those appendages could be used used to move the entire system, as well as to manipulate objects. “You could make an octopus,” says Rus.