This micro-robot mimics the ingenious grasp of a Venus flytrap

Imitation is the sincerest form of flattery. 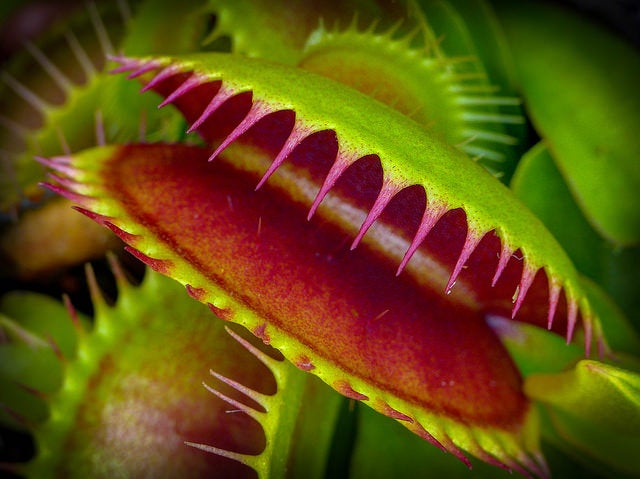 Researchers used the Venus flytrap as inspiration for their soft micro-robot.
SHARE

From Charles Darwin, who once called it “one of the most wonderful plants in the world,” to the man-eating Audrey II of “Little Shop of Horrors”, the Venus flytrap has inspired artists and scientists for more than a century. Into that canon enters a new soft gripping robot, which as described in a study released today in the journal Nature Communications, uses the flytrap as its design inspiration for sensing and picking up objects.

“Quite often when people are interested in smart materials and functional materials their inspiration comes from nature,” says study author Arri Priimagi. “That’s also true in our case.”

The inside of a Venus flytrap leaf has tiny trigger hairs, and when an insect or object touches at least two or more of them within twenty seconds, sensory cells at the base of the hairs generate an electrical signal. That triggers the motor cells, and the flytrap snaps shut. It’s this chemical-sensory relationship that lets a flytrap “know” to close when a fly lands, but to stay open when a piece of dust blows its way.

“It’s the fact that the Venus flytrap can distinguish between different objects,” says Priimagi. “It closes up when say the fly enters its surface, but when it’s a dust particle it doesn’t do anything. And that’s the part that we’ve incorporated into our system…of course our device is much more simplistic. But that autonomous decision making, that’s where we wanted to mimic the Venus fly trap.”

Light triggers the snapping motion of the new robot instead of touch. The researchers took a thin, centimeter-long layer of a light-responsive polymer, known as a liquid-crystal elastomer, and glued it to an optical fiber. Light passes through the optical fiber, and when an object comes into the field of view—so that some light from the object is reflected back onto the polymer layer—this reflection causes the device to close and grasp the object in a manner similar to a Venus flytrap.

In other words, the robot doesn’t require complex computing systems or outside intervention to grasp the object. If the conditions are right—if an insect touches two trigger hairs within twenty seconds, or if enough light reflects off an object onto the liquid-crystal elastomer—the system reacts.

Both the liquid crystal-elastomer and fiber optics predate Priimagi’s efforts. What makes his design unique is in the pairing of the two. It’s too early to tell what the practical applications will be, though Priimagi thinks that eventually the design could be used in places that are too small for conventional computer processors, or as quality control systems for micro devices.

In the meantime, the team is working to see if they can get the device to see colors. Since the trap works based on reflected light, it might be possible to get the polymer to close when it sees the color red, for example, but to stay open when it sees green. Further, Priimagi hopes he can get it to lift heavier objects.

And finally, says Priimagi, there’s the goal of making the robotic flytrap even more flytrap-y. “One thing about an actual flytrap is the closing motion it creates is a snapping motion. I think the snapping motion is what enables the flytrap to consume very little energy and snap very quickly. That’s also something that we want to develop in the future, to see if we can make the system actuate faster.”