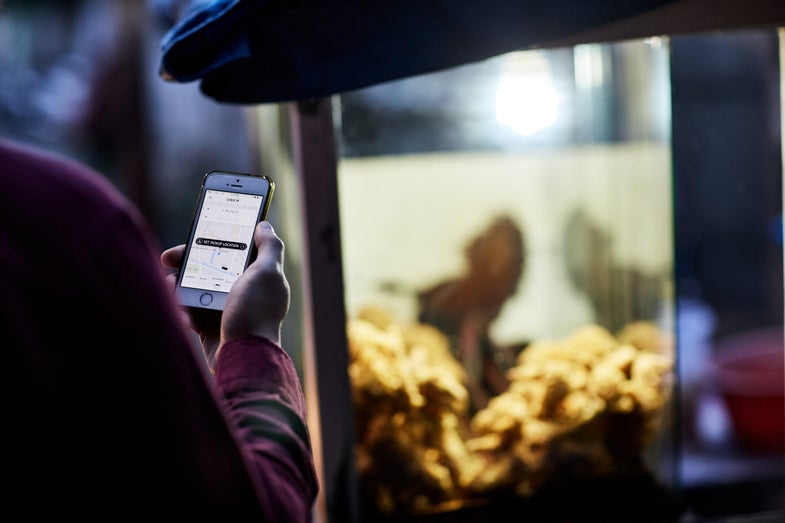 A ridesharing service like Uber or Lyft seems like it should help stem drunk driving by offering an easy, cheap option for tipsy customers to get home at the end of the night. And Uber even claims on its website that ride-hailing options like it “are helping to curb drunk driving.” But new research shows that Uber’s presence in a city only inconsistently leads to a decline in accidents caused by intoxication behind the wheel, and there’s far from being a conclusive answer to the question.

For a new study published in the American Journal of Epidemiology, investigators concentrated their research on cities where Uber had begun service, paused for some time, and then resumed. Their hypothesis was that focusing on the moment when Uber became available again after a hiatus that followed its initial establishment in a city might show a dip in crashes involving alcohol.

Indeed, in Portland, Oregon, and San Antonio, Texas, it did. In Portland, crashes involving alcohol dropped by about 62 percent after Uber resumed service in 2015 after a four-month pause. And in San Antonio, the drop was about 40 percent after a six-month pause. In both cities, those percentages translate into about three fewer crashes per week involving alcohol, although the total number of car crashes involving injuries appears to have stayed about the same. (For all cities, the researchers used data involving car crashes that were serious enough to cause death or injury.)

But there was no such finding in Reno, Nevada. When Uber resumed there in September, 2015, following a 10-month pause, the researchers saw no dip in accidents involving booze.

“There’s been some previous studies that have looked at this question of whether ride sharing is related to motor vehicle crashes, particularly including alcohol-involved crashes,” says Christopher Morrison, a postdoctoral fellow at the University of Pennsylvania Injury Science Center and the study’s first author. “And the results have been inconsistent.” This study, with its own mixed findings, continues that pattern.

The stakes are high. “There are so many motor vehicle crashes, particularly alcohol-involved crashes,” Morrison says, that if services like Uber and Lyft did limit drunk driving accidents, that would represent a public health boon. Indeed, over 10,000 people died in the United States in crashes involving alcohol in 2015, according to the Centers for Disease Control and Prevention.

But as to the reason why they saw an inconsistent effect across cities—decreases in two of them, but not Reno—Morrison says that quite simply, he doesn’t know the answer. That’s because they designed this study to discover if Uber is associated with fewer drunk-driving accidents in different cities, not what factors in each city might be responsible for that relationship, if it exists in the first place. In short, each city is going to be different. “The key message to come out of the paper is that the relationships [between Uber and drunk driving] will differ from city to city,” Morrison says. (They also studied Las Vegas, but the data on alcohol-related crashes wasn’t available.)

Morrison’s study follows one from last year, also published in the American Journal of Epidemiology, that tackled a similar question; it explored whether or not there was an association between Uber and traffic deaths in 100 highly populous counties in the United States, and found no relationship between the two from that big-picture level.

This latest research “honed in on the key point that has emerged in this debate over the association between ridesharing and alcohol-related traffic crashes and fatalities – context matters,” Noli Brazil, the first author of that 2016 study and an assistant professor at the University of California, Davis, says via email. Despite his own study’s findings, he adds that, “ridesharing may affect crashes differently in different places.”

He says that a slew of factors could affect this relationship: how long Uber or Lyft has been in a city, what kind of transit options there are in the first place, whether the city sprawls out or not, and the area’s demographics. “In cities like Reno and Las Vegas, perhaps rideshare services are still secondary options to more historically dominant forms of transportation like taxi cabs or simply walking the strip,” he says.