The story behind the Neptune missile, the weapon that sank the Moskva

Named for the Roman god of the sea, the Neptune is based on the Kh-35 missile and took years to develop. 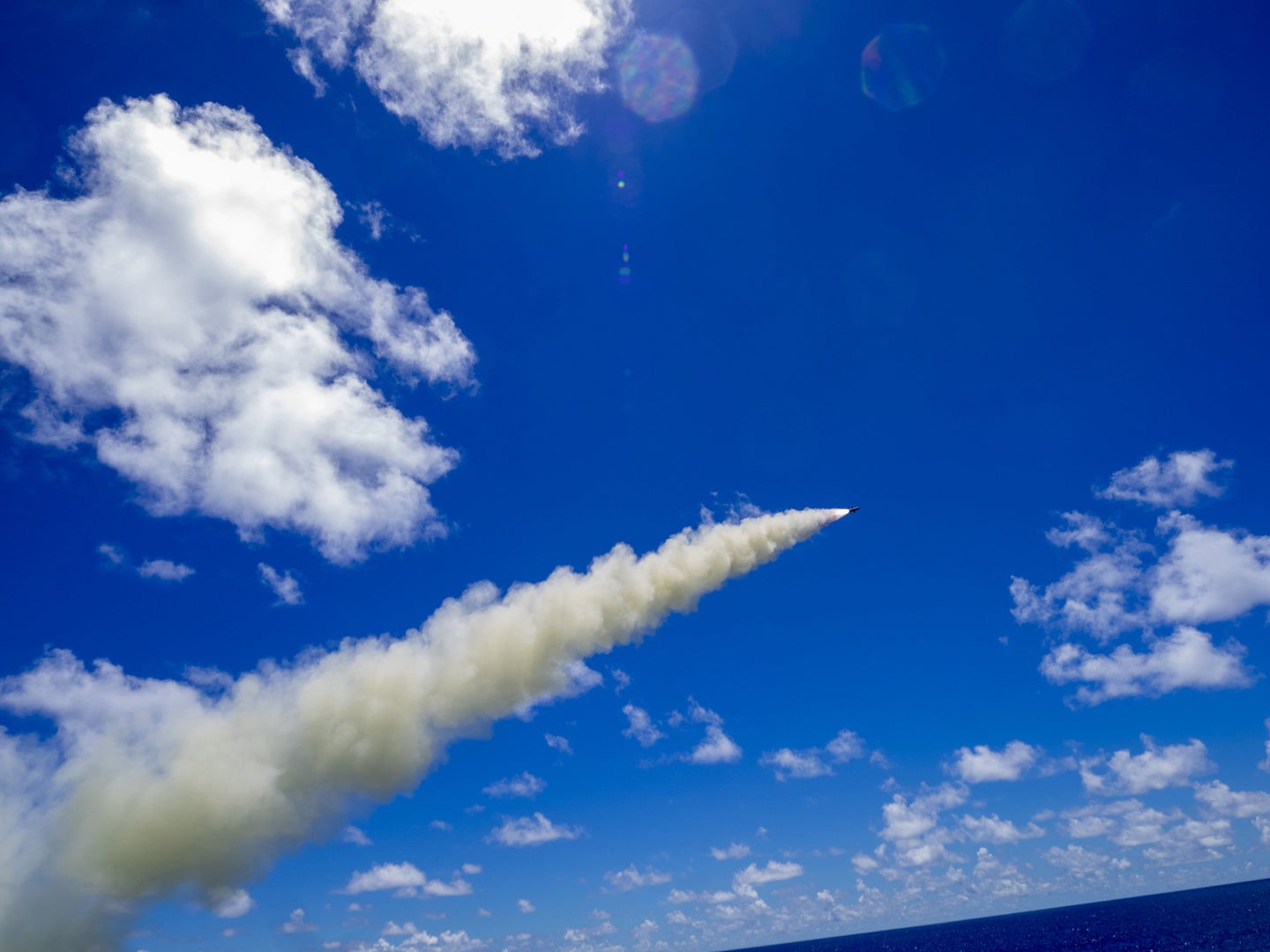 A US harpoon surface-to-surface missile seen during an exercise in 2019 in the Philippine Sea after being fired from the USS Antietam. US Navy / Marissa Liu
SHARE

On April 13, two Ukrainian missiles hit the guided missile cruiser Moskva, flagship of Russia’s Black Sea fleet. The vessel sank as it was being towed back to port, bringing to the bottom of the sea Russia’s most capable ship in the region, as well as a religious artifact. While Russia initially reported the damage and sinking as the result of a fire on board the vessel, US defense officials confirmed to NPR that it was Ukrainian missiles that destroyed the ship.

Those missiles were two Neptunes, a Ukrainian design based on an older Soviet anti-ship missile model, but upgraded for modern warfare. Those upgrades appear to have paid off, giving Ukrainian defenders on land the reach and power to destroy a hostile enemy.

The ability of missiles to destroy ships with existing anti-missile defenses will shape future planning. The US Navy is already investing in anti-missile lasers to protect its own vessels from such attacks, and any navy considering future wars near coasts will have to take into account the possibility of powerful anti-ship missiles in the arsenals of its enemies.

The Neptune missile is named for the ancient Roman god that was sovereign over the sea. It is based on the Kh-35 missile, a subsonic anti-ship cruise missile the Soviet Union began developing in 1972. As designed, the Kh-35 missiles would be launched from a special truck on the shore, and then deliver a 330-pound warhead into the side of a ship up to 75 miles away.

This missile travels at around 671 mph, which is below the speed of sound, and it flies close to the water, especially as it approaches its target, making it much more likely to hit the ship at the water line. To travel towards its target, the Kh-35 uses both inertial guidance, which lets the missile know where it is and where it isn’t, and then an active radar to guide it directly to the part of the ship it is supposed to hit. While the Kh-35 was Soviet in origin, it took until 2003 for it to enter service with the Russian Federation.

Kyiv’s Luch Design Bureau started developing the Neptune missile in 2013, with the goal of testing by 2016. In 2014, Russia annexed Crimea and backed separatists forces in the Donbas region of eastern Ukraine, in response to Ukraine’s Euromaidan protests and change of government. That might explain in part why it took until January 30, 2018 for the Neptune to have its first test flight. Later that year, a Neptune hit a target in the ocean 62 miles away. At the time of the later test, Neptune’s range was given at up to 174 miles, though a brochure for Luch Design puts the range at just over 186 miles. The missile was again tested in April 2019 and April 2020. The missile weighs a total of 1,477 pounds, including a payload of 320 pounds of explosive.

“[Neptune] is intended to defeat warships such as cruiser, destroyer frigate, corvette, airborne, tank landing ships and vehicles, which operate both independently and as part of the ship groups and amphibious groups,” reads a Luch Design Bureau brochure for the missile from 2020. The Neptune is also, the brochure notes, designed to work in all kinds of weather, at night or day, and it works despite any enemy countermeasures, like jamming or shooting at the weapons

By initial accounts, the nine-year process from design start to the sinking of the Moskva appears to have been a major success. The missile had the range and punch needed for a pair of them to destroy a large, hostile ship, and the missiles do not appear to have been stopped by any defensive precautions.

Guided missiles like the Neptune have real constraints. There is only so far out to sea they can hit, and there are ship-board countermeasure systems like jamming the electronics of the missile, or hitting it with an anti-missile missile, that could thwart it. Newever developments, like directed energy or laser weapons, may someday defeat missiles.

The other way to avoid getting hit with a missile is to operate beyond its maximum range. This appears to be the approach adopted by the Russian Navy. One immediate effect of the sinking of the Moskva was that Russia’s Black Sea fleet moved further away from the Ukrainian-controlled coast, out of range of the Neptune missiles. Another is that Russia is using its ships with cruise missiles to attack targets further inland.

In naval warfare circles, missiles like the Neptune are seen as part of an “Anti-access/area denial” strategy, which is one of the more straightforward pieces of military jargon. In essence, it means that the existence of such missiles makes approaching within their range dangerous. If a navy wants to cross a contested passage, its ships will have to rely on their own defenses and will likely want to try and destroy the anti-ship missiles first. Because the Neptune missiles are launched from the back of a dedicated truck, the missiles can fire and the truck can be gone before any return attack hits.

Missiles make it harder to move with impunity, and for a ship to destroy anti-ship missile launchers it will need its own missiles. It will also likely need the support of scouting aircraft to direct the fire and possibly to hit missiles on the ground. (This, too, means flying aircraft into anti-air missile range.)

As planners and observers watch what is happening in the Black Sea, what plays out there could have implications for how countries either contemplating or threatened by future naval assault develop weapons for the future. Nations like Taiwan were already investing heavily in anti-ship missiles, for example. After the sinking of the Moskva, it’s likely more navies will change how they operate when worried about encountering missile-armed foes.