These fighter jets inspired the aircraft in ‘Star Wars’

From WWII to long ago and far, far away. 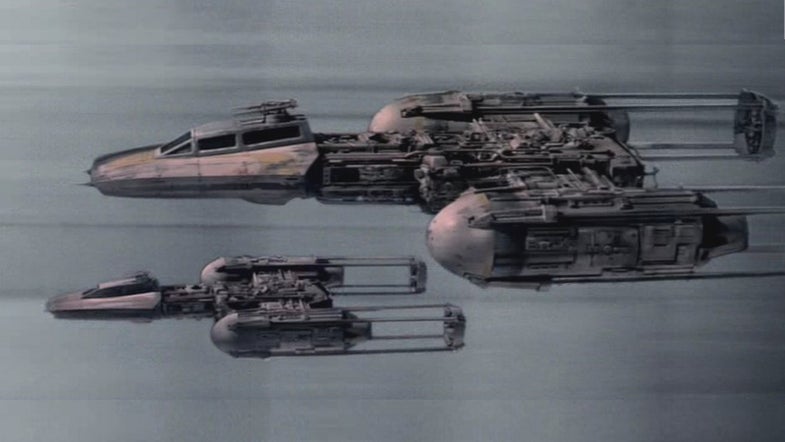 An X-Wing T-70 does battle with a TIE fighter in Star Wars: The Force Awakens.

During George Lucas’s childhood in the 1950s, World War II was still very much a part of popular culture despite being safely in the rearview mirror. Action heroes frequented the silver screen in large numbers, and none were more glamorous than fighter pilots. It’s easy to see how the war and the action flicks it spawned inspired the galactic dogfights of the Star Wars films. Here we match up Star Wars fighters with their WWII counterparts and their modern equivalents.

No Star Wars aircraft is more synonymous with the Rebel Alliance than the X-Wing, and no aircraft was more synonymous with the Allied effort of WWII than the British Supermarine Spitfire. The Spitfire was an extremely versatile single seat fighter aircraft used by the Royal Air Force (RAF) and a number of other nations throughout the Second World War. It was a high performance aircraft capable of reaching faster speeds than many other contemporary fighters of the time, and its excellent maneuverability made it effective in combat. On each of its distinctive elliptical shaped wings bristled four .303 Browning machine guns.

It first earned distinction during the Battle of Britain (July-October 1940), where it enjoyed a high victory-to-loss ratio against Luftwaffe fighters and helped stave off German invasion. It soon came to make up the core of the RAF and was used heavily with various upgrades and modifications throughout the entirety of the war. Much beloved by the pilots that flew it, the Spitfire was arguably one of the most important allied aircraft of World War II.

The X-Wing starfighter is a fast, nimble, and highly adept dogfighter, capable of matching the acrobatic Imperial TIE fighters in combat. The X-Wing’s speed and maneuverability are balanced by its formidable firepower and protection.

Like the Spitfire, the X-Wing’s primary role is as a fighter and interceptor, but its two proton torpedo launchers make it also fairly useful in attacks on large starships or ground forces—much more like the F-16, its modern counterpart. Like both the Spitfire and the F-16, however, its reliability made it the backbone of the Rebel Alliance’s fleet, and likely that of the Resistance in Episode VII.

Not much is known about the T-70—the newest, most advanced model—but it undoubtedly has upgrades to armaments, shields and engines.

The combat workhorse is regularly used in military operations to this day. As recently as November 24, 2015, a Turkish Air Force F-16 shot down a Russian Sukhoi Su-24 fighter/bomber over the Turkish/Syrian border, sparking an international controversy.

The Thunderbolt fighter/bomber was one of the mainstays of the United States Army Air Forces (USAAF) in Europe throughout World War II. Although quite adept in the fighter role, the “jug” (as it came to be known because of its shape), gained particular fame in the ground attack role because of its heavy duty armaments and ability to take a tremendous thrashing and stay airborne.

P-47s were the heaviest and largest fighter/bomber airplanes of their time, weighing up to 8 tons when fully armed. Four .50 caliber machine guns on each wing, coupled with rockets and up to 2,500 pounds of bombs wreaked havoc on German ground forces and supply lines. The Y-Wing starfighter closely resembles the the P-47 in its role among the Rebel Alliance’s air fleets. Designed originally as a fighter, it too found great usage as an attack aircraft best suited to destruction of large targets.

The Y-Wing is perhaps the longest serving fighter/bomber aircraft of the Rebel Alliance. The earliest versions of it were first used by the Republic during the Clone Wars, but it later found extensive service with the Rebel Alliance. Its slow speed and poor maneuverability made it a lackluster dogfighter, but its ability to take a beating and carry heavy weapons payloads saw it find good use as an attack aircraft against large star ships and ground targets. Much like the P-47, Y-Wings became adept at running the gauntlet of combat, bombing their targets, and bringing their pilots back alive despite heavy structural damage.

The A-10 is an adept ground attack aircraft, just like the Y-Wing, and its namesake, the P-47 Thunderbolt. Unlike both of those planes, however, the A-10 was built solely for that purpose. The twin-engine jet aircraft carries a massive rotary cannon capable of firing up to 3,900 rounds per minute, as well as air-to-surface missiles and laser-guided bombs.

The aircraft was first operational in the late seventies, but numerous upgrades and variations have modernized its controls and armaments. In recent times, the A-10 has seen action in the conflicts in Iraq, Afghanistan, and Libya. The United States Air Force is currently using A-10s in combat operations against the Islamic State in the Middle East.

Space battles in the Original Trilogy borrow heavily from the dogfight in movies about World War II, but there’s a slight mismatch. No Axis power flew a plane as bad as the TIE Fighter in anything like the numbers flown by the Galactic Empire. The worst mass-produced fighter of the war was likely the Soviet Union’s Polikarpov I-15 Biplane, first built in 1933 and somehow still in service when Germany invaded.

The most produced Axis fighter of the war is the Messerschmitt Bf 109, and it’s as good a fit as we’re likely to get. Over 30,000 of the fighter were built, making it likely the third-most produced aircraft design of all time. When Nazi Germany launched its blitzkrieg, it was the Bf 109 that provided air cover for its armies. And yet, despite the planes numbers, it wasn’t quite enough to win on its own. As ​Flight Global​ described it in October 1940, shortly before Germany abandoned its aerial offensive and conceded the Battle of Britain, the Bf 109 was “A German Design Which Just Missed Being a Success.”

Flaws included an engine that overheats, and a lack of bulletproof glass in the cockpit. As ​FlightGlobal​ cuttingly described it:

TIE Fighters are as iconic as they are terrible. The short range fighters fly and die by the dozens, with dense squadrons of them protecting Star Destroyers and Death Stars from rebel fighters. Armed with two laser cannon, the short-range fighters have to operate from larger ships or space stations. At the Battle of Yavin 4 in the first ​Star Wars​ movie, all TIE fighters dispatched to stop the Rebels were lost in combat, destroying three rebel fighters and failing to prevent the attack from succeeding.

Embarrassingly, TIE fighters suffered in battle not only against X-Wings, but failed to stop the Millennium Falcon on their own, falling to the smuggling ship’s gun turrets. Common as they are in battle, (and we’ll see them again in ​The Force Awakens​), when faced with skilled opponents in other starfighters, TIE fighters simply aren’t very good.

No other war saw as many airplanes as World War II, so it’s a little tricky to find a jet-age fighter to match the sheer numbers of the TIE fleet. The most-produced jet fighter ever, the MiG-15 matches almost everything the TIE did: cheap, primitive, useful in large numbers, and lightly armed, it’s an almost perfect fit. Except it lacks one key trait: longevity. MiG-15s did a lot of the fighting in the Korean War, and were obsolete for the Vietnam war a decade later.

It’s a different MiG that is our modern TIE equivalent: the MiG-21 “Fishbed.” The second-most produced jet fighter of all time, Soviet-made MiG-21s first flew in 1956, entered service in 1960, and ​is still flown today​. The plane’s ubiquity is its defining trait, and it was a nimble enough fighter to prove deadly to American jets for a few years over Vietnam. While outclassed by the advanced combat jets of today, the MiG-21 still serves in many airforces worldwide.

Professor and writer Robert Farley, writing at ​The National Interest​, perhaps described the MiG-21 the best:

Blitzkrieg combined three decades of evolution into warfare into one very fast, very deadly package. Part of that onslaught was dive-bombers. The Junkers Ju 87, nicknamed “Stuka”, carried a small load of bombs and, in an almost back-breaking maneuver, would go into a vertical dive and release them as close to precisely on target as possible. In the age before precision weaponry, diving Stukas were the surest way to put an explosive from a plane onto a target.

Effective as they were on offense, the bombers were rapidly outclassed by other planes later in the war, and their lack of defensive weapons made them easy targets for fighters. They proved adaptable, attacking ships early in the war and tanks on the Eastern front later in the war.

We first see the TIE Bomber in ​The Empire Strikes Back​ chasing the Millennium Falcon into an asteroid field. Other than Darth Vader’s personal fighter, the bombers are the first TIE variants we see, showing a fleet that relies on more than just its cheapest craft to get the job done. The bombers drop charges that keep the Falcon pinned in place, making it unsafe to venture to the surface above. Unlike the consistently inept TIE fighters, the bombers did their job well, and it would have worked if Han Solo hadn’t landed his ship inside a giant space worm, the one thing deadlier than the bombs above.

By the end of World War II, dive bombers were an obsolete concept. Jet airplanes could carry more bombs and deliver them much faster than prop-driven jets. Most fighters could carry a few bombs for targets of opportunity on the ground, so there wasn’t much need for a dedicated anti-ground plane. “Strike aircraft” mostly filled this void, and of those in use by countries other than NATO allies, Russia’s Sukhoi Su-24 is probably the best.

Introduced in the mid-1970s, the Su-24 remains in service with several nations today, the vast majority of existing models still flown by Russia itself. While outdated, it’s shown up in modern wars. A Ukrainian-flown Su-24 was shot down by Russian-backed separatists in 2014, and earlier this year Turkey shot down a Russian-flown Su-24 that crossed over the border from Syria to Turkey.