FYI: What Are Cruise Missiles, And How Do They Work?

Everything you ever wanted to know about this retro-'90s weapon, which the Obama administration might use against Syria's government. 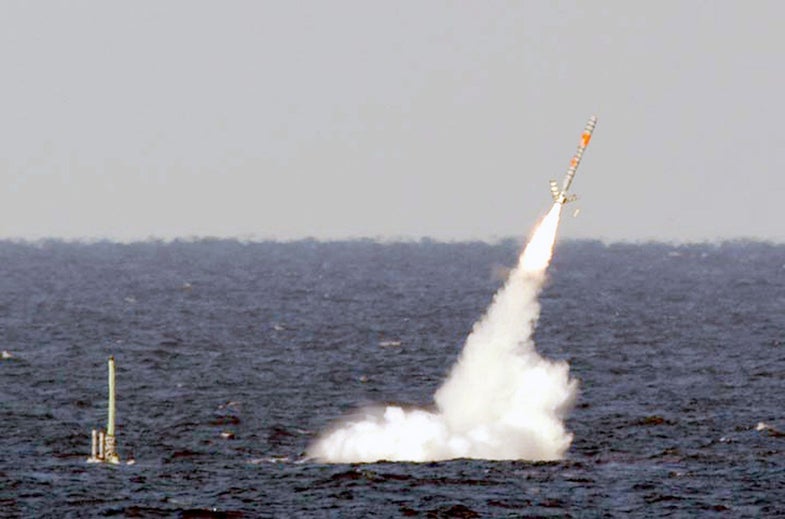 The Obama administration is considering what sort of military action to take, if any, against the government of Syrian President Bashar al Assad, which stands accused of using chemical weapons against its own people. The most likely option: a cruise missile strike against assorted military and government sites, like the presidential palace and chemical munitions facilities. Here’s a primer on cruise missiles.

What are cruise missiles?
Cruise missiles are fast-moving, guided bombs that soar at a very low trajectory, parallel to the ground. They are distinct from regular (non-cruise) missiles primarily because they go really far. They are also distinct from drones, because they do not have on-the-ground pilots–instead, they fly a pre-set path–and you can only use them once. Germany used the first cruise missile in World War II. Called V-1s, after Vergeltung, the [German word for retribution, they were fired from sites in northern France and aimed at London. The idea behind the V-1, which is the core idea behind all cruise missiles since, is to attack from far away without needing a pilot to control it.

How do cruise missiles work?

Cruise missiles all have basically the same parts: an engine, often a jet with an air intake, propels the missile through the air. There’s a spot for fuel, and a spot for the warhead, or explosive carried inside. Both cruise missiles pictured below were designed to carry nuclear warheads, but most cruise missiles, and all that have actually been used in war, carry conventional, non-nuclear explosives. The front end of a cruise missile usually has a guidance system. Cruise missiles, with wings and engines, often resemble pilot-less planes.

Cruise missiles can be launched by airplanes, submarines, ships, or from launching vehicles on land. Besides the United States, more than 70 nations have cruise missiles.

Has the United States used cruise missiles before?

Oh, yeah. If the drone is the signature weapon of the 2000s and 2010s, cruise missiles were the go-to in the 1990s. Deadly, launched from far away, and without a pilot on board, they promised to destroy enemies without risking American casualties. Here are three American cruise missile strikes from the 1990s:

In 1993, Kuwaiti authorities foiled a plot by Iraqi Intelligence services to assassinate former President George H.W. Bush. In retaliation, President Bill Clinton ordered the firing of 23 cruise missiles at Iraqi intelligence headquarters. In 1998, President Bill Clinton ordered a cruise missile strike against the El Shifa Pharmaceutical Industries plant in Sudan, under the assumption that it was a chemical weapons plant. Also in 1998, Clinton ordered troops to fire cruise missiles at Osama bin Laden in the Khost province of Afghanistan. Both of these 1998 attempts were retaliation for the bombing of U.S. embassies in East Africa.

What were the consequences?

Following the 1993 strike, Iraq and the United States existed in a state of simmering hostility for the next decade. America (together with the United Kingdom and, for some of the time, France) imposed a “no-fly-zone” over the country, to prevent Iraqi’s government from attacking Kurds in the north and Shi’ites in the south. The no-fly-zone was deeply problematic: Iraqi anti-air missiles occasionally fired at American aircraft overhead, and Americans bombed Iraqi anti-air missile sites in return. It only ended with the overthrow of Saddam Hussein following the 2003 invasion of Iraq. Tensions and violence in Iraq persist to this day.

The El Shifa Pharmaceutical Industries destroyed by the United States in 1998 was in fact actually just a pharmaceutical plant. The ruins were left untouched and now serve as a shrine to American incompetence.

The cruise missile strike in Khost failed to kill Osama bin Laden; a mission that would take 13 more years, a ground invasion of Afghanistan, a decade-long man-hunt, and a special kill team of Navy SEALS to complete. From the National Security Archives, there is also evidence that “the strikes not only failed to hurt Osama bin Laden but ultimately may have brought al-Qaeda and the Taliban closer politically and ideologically.”

An all-but retired missile. It is stealthy and carries a nuclear warhead.

What are cruise missiles’ limitations?

Although the consensus is that Tomahawks are a highly successful weapon, these weapons have several limitations. One of these is that their flight paths are relatively predictable, which is a function of the fact that some terrain, notably deserts, provides relatively few features for terrain following guidance. A second problem is that mission planning for terrain following guidance systems is more time consuming and complicated in terms of intelligence requirements than one might expect. For example, to use Tomahawks a unit would have to request a targeting package from such agencies as the Defense Mapping Agency to gather the data necessary for a mission. A third limitation was that Tomahawks could not be used against hardened targets because the 1,000 pound warhead, the weapon’s accuracy, and its final kinetic energy when it hits the target do not produce high probabilities of kill. The final limitation was that Tomahawk cruise missiles cannot attack moving targets because they are guided to a position rather than to a specific target. Similarly, a Tomahawk cruise missile could not attack relocatable, that is mobile, targets because these may move while the mission is being planned or during the flight of the cruise missile.

Since then, cruise missile guidance systems have improved, but the overall limitations of the weapon system remain. The weapon requires good intelligence and good maps to hit the target. It also needs the enemy to stay in one, relatively vulnerable place.

Will the U.S. use cruise missiles in Syria?

It’s not entirely clear. More certain is that idea that drones won’t be used. Drones are great at tracking individuals from safe skies. But Syria’s government has anti-aircraft weapons, which can easily shoot down drones. Cruise missiles, instead, fly faster, hit harder, and instead of hunting individuals take aim at big, fixed targets like military bases or palaces. Also, the United States has a lot of cruise missiles near Syria, and very few available drones.

Several publications, including the New York Times, Los Angeles Times, and the Wall Street Journal expect the U.S. to use cruise missiles if the Obama administration does order strikes. Anonymous senior U.S. officials told NBC that a three-day cruise missile barrage against the Assad regime is possible. Of course, there’s no guarantee that strikes will happen at all. Yesterday, President Obama said he had not made a decision on whether to intervene in Syria.

Launching cruise missiles feels like a strong military action for a president to take, but it’s very unlikely to be a decisive one.

Ask Us Anything
Military
Weapons