Shenzhen and Hangzhou Get New Weapons 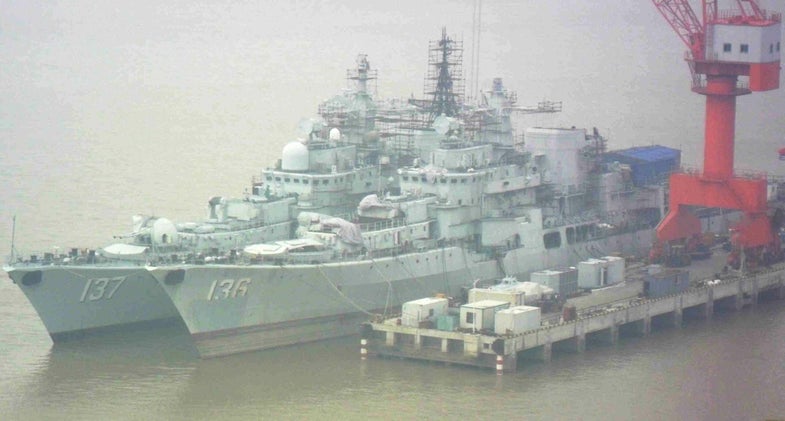 The destroyers "136" Hangzhou and "137" Fuzhou side by side at a shipyard gives us an idea of what to expect from the upgrades. The Hangzhou has much of its radars, its two AK-130 turrets (one is in the rear), P-270 antiship missile canisters and SA-N-12 SAM rail launcher all removed, while the Fuzhou waits its turn. hmmwv
SHARE 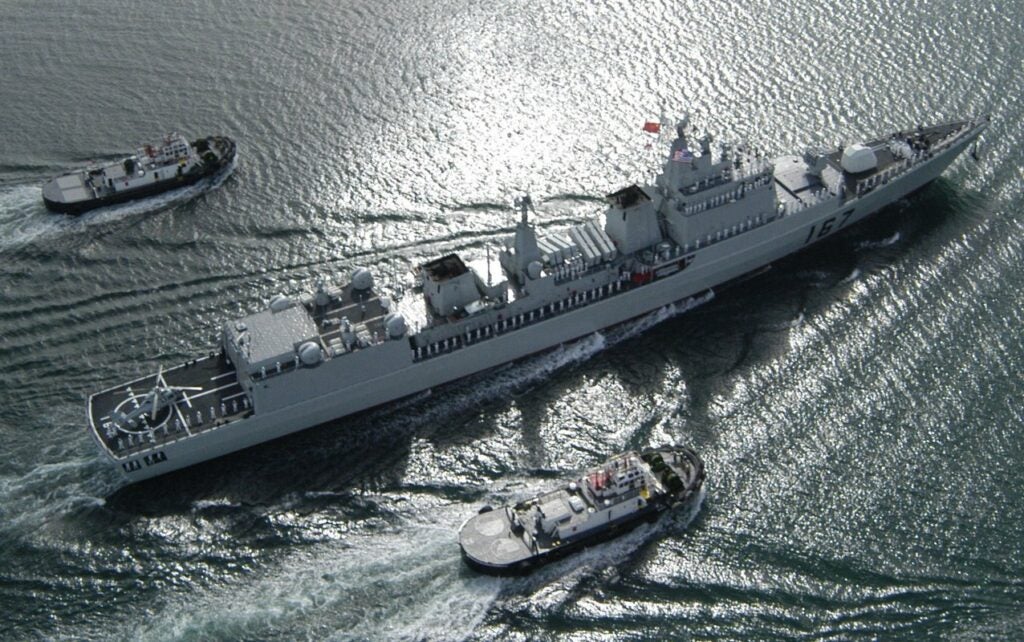 The Type 051B Destroyer, “167” Shenzhen, is shown here in its original configuation, including the forward HQ-7 SAM launcher and four 37mm anti-air turrets around its stern hangar. Until the Type 052C, it was China’s largest indigenous surface warship.

The Chinese Navy (PLAN) has been expanding its power with a series of new, more capable surface warships like the 052D guided missile destroyers (DDG) and 054A frigates, while preparing its Type 055 cruiser for a launch at decade’s end. but equally notable is how it is also spending big bucks to update its older warships to make them relevant in A2/AD operations. 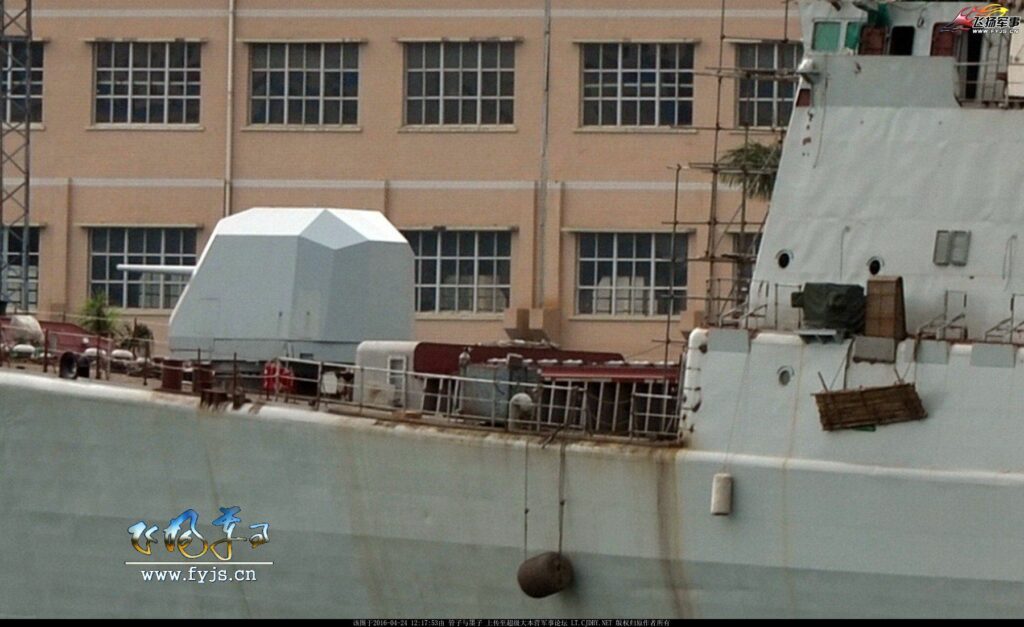 This late April 2016 photo shows the Shenzhen’s refitting including the removal of the 8 missile HQ-7 missile launcher, replaced by 32 VLS cells capable of launching HQ-16 medium range SAMs (the same missile used by the Type 054A frigate).

When the Type 051B destroyer “Shenzhen” (167) was originally commissioned in 1998, it was China’s biggest surface warship at 6,100 tons. However, limitations on Chinese technology at the time meant that instead of the originally planned vertical launch system (VLS) for rapid fire of air defense missiles, the Shenzhen had to make do with an 8 missile launcher of short ranged (10km-15km) HQ-7 SAMs. But nearly two decades later, that mistake is being corrected. 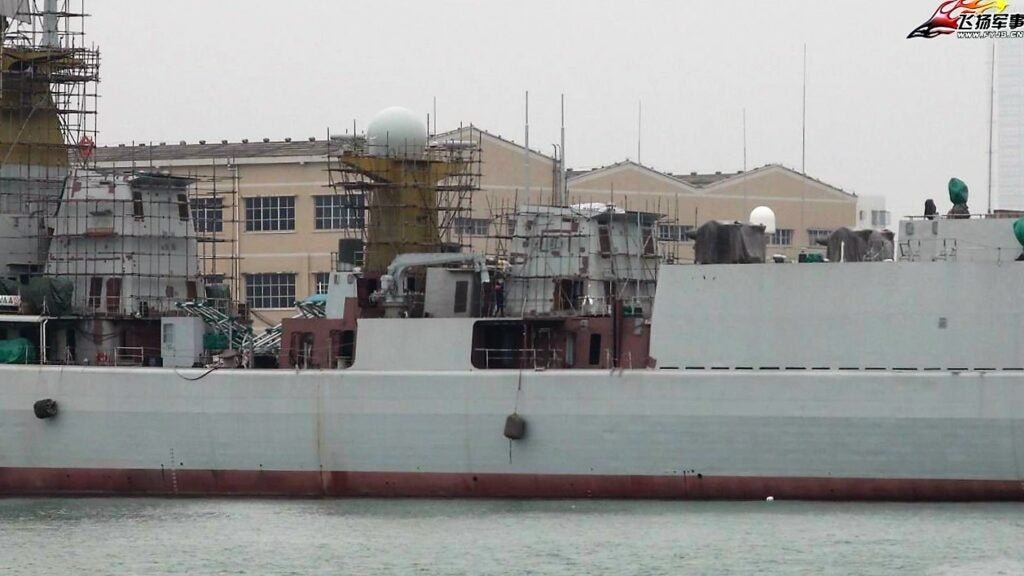 Two Type 1130 CIWS Gatling cannons (in brown shrouds during the refit) have replaced the older four 37mm turrets. With much greater rates of fire, the Type 1130 improves the Shenzhen’s survival capability against even supersonic missiles.

Put back in the shipyard in 2015, new photos now indicate that the Shenzhen is receiving a total of 32 VLS in front of its superstructure. Those 32 HQ-16 medium range (50-60km) SAMs have completely replaced the HQ-7 launcher. This is a significant gain, quadrupling the ship’s available fire power and 16 times the area covered by missile. The Shenzhen is also getting two Type 1130 Gatling cannons on top of its helicopter hangar; each eleven barreled Type 1130 can spit out 10,000 one pound 30mm shells a minute at incoming supersonic missiles. These upgrades will increase the Shenzhen’s defense against anti-ship missile, enemy aircraft and enable it to provide some level of air defense cover to other warships near it. 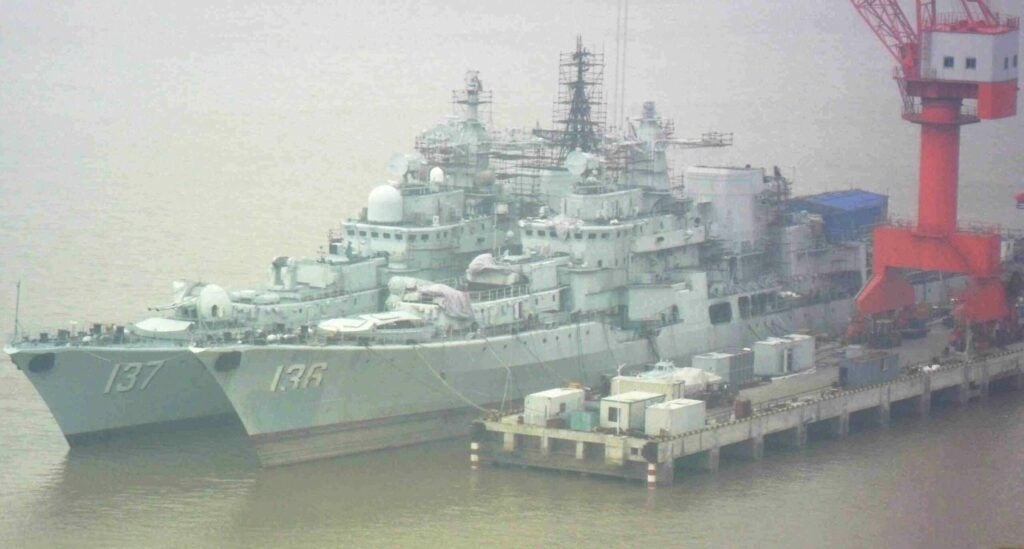 The destroyers “136” Hangzhou and “137” Fuzhou side by side at a shipyard gives us an idea of what to expect from the upgrades. The Hangzhou has much of its radars, its two AK-130 turrets (one is in the rear), P-270 antiship missile canisters and SA-N-12 SAM rail launcher all removed, while the Fuzhou waits its turn.

The same refits and updates are playing out for the foreign built ships in the PLAN. China has a purchased total of four Sovremennyy destroyers from Russia in the late 1990s and mid 2000s. These 7,900 ton DDGs are focused on surface warfare, with 8 Moskit P-270 supersonic antiship missiles, two dual barreled 130mm AK-130 turrets and two launchers for 48 SA-N-12 SAMs. While still powerful warships, China is looking to bring their systems up to speed on 21st century technology. 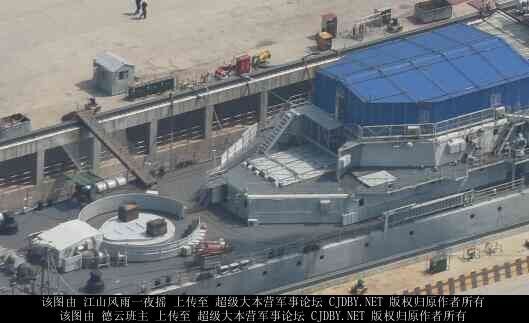 The VLS cells in the rear of the Hangzhou (right behind the helipad, currently covered by a blue tarp), likely number 16-24 cells, each one can carry YJ-18 anti-ship missiles, HQ-9 SAMs or CJ-10 land attack cruise missiles.

Currently, Hangzhou (136), the oldest of the PLAN Sovremennyys, is undergoing a refit, entailing the removal of all its Soviet era weaponry in favor of modern Chinese systems. The AK-130 turrets will be replaced by the HJ/P-130 cannon, which has a longer range and the ability to fire a wide range of precision guided munitions. The Moskit P-270 missiles will likely be replaced with YJ-12 antiship missiles, which have a higher speed (Mach 3.5-4.0 vs. Mach 3.0) and greater range (400km vs. 250km). It is highly likely that the Hangzhou’s communications and battle management system are also being refitted with more modern equipment. And just like the Shenzhen, the Hangzhou will receive VLS in the place of its older SAM launchers. The bow and stern SA-N-12 launchers are both being replaced with 2-3 sets of 8 cell VLS at each end of the warship. Those 32-48 VLS can maximize the Hangzhou’s air defense capability by being able to more quickly fire SAMs, or carry land attack cruise missiles to extend its reach against land targets. 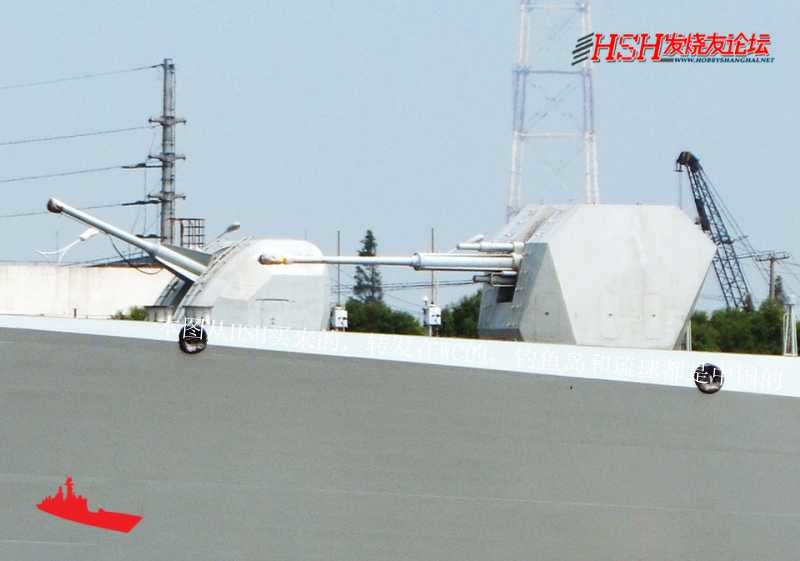 Giving new life to these warships is a relatively cheap fix for the PLAN when boosting its firepower. While the Shenzhen and Hangzhou may not be as fuel efficient or equipped with high tech radars like the 052D DDGs, upgrading their warfighting and survivability is a smart way to extend China’s anti-air and anti-surface naval reach at low costs.