North Korea could test an intercontinental missile this year

It's the when, not the what, that's Kim Jong-unknown 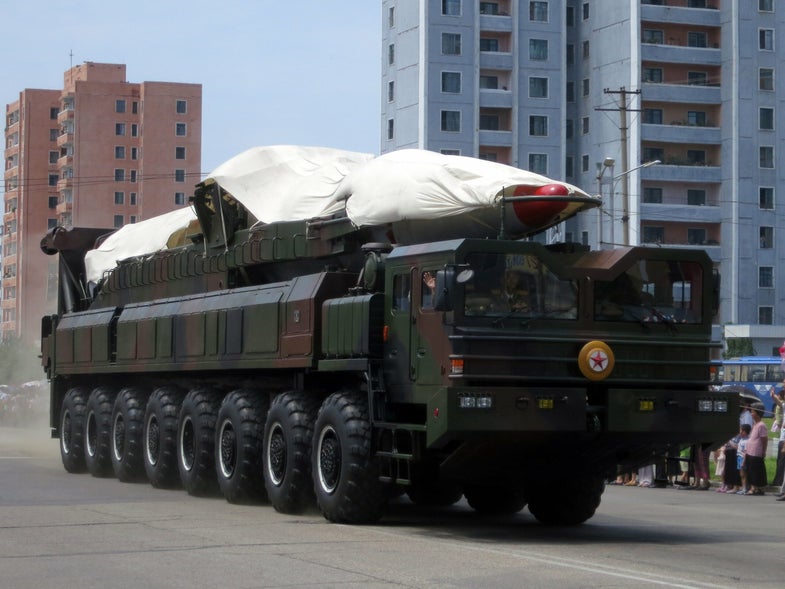 In 1957, the Soviet Union tested the world’s first intercontinental ballistic missile. Its harmless payload, the beeping satellite Sputnik, flared bright across the night sky, a reminder to all the world of the missile that put it there. Sixty years later, North Korea is expected to be the fifth country to join that exclusive club, after the United States, China, and India. And while Kim Jong-un’s totalitarian state is quiet about the developments, there’s enough information available to the public that the question for 2017 isn’t will North Korea test a missile, but when?

In September 2016, experts warned that North Korea would have a working intercontinental nuclear missile by 2020. Between now and then, we’ve been in a period of uncertainty: North Korea may test a missile that may be capable of carrying a warhead that may be miniaturized enough to fit inside the missile.

“The language I often use is—as a scientist officially—no we don’t know if they have a warhead. They may, or they may not. We don’t have enough evidence,” says Melissa Hanham, a senior researcher at the James Martin Center for nonproliferation studies. “That being said, as a policymaker, I really suggest that we start behaving like they do.”

The evidence Melissa cites is not trivial: North Korea’s conducted five nuclear tests, with the most recent one just over a year ago. North Korea’s state-run paper published a picture of their dictator Kim Jong-un standing in front of a faceted silver sphere, which almost resembles a disco ball.

“We can’t see what’s inside that object, but we can view other things, we can take measurements, and we can make estimates of the weight and that kind of thing. That silver disco ball definitely fits into the payload of an ICBM or other shorter-range missiles too,” Hanham continued, “but whether it’s real or not is not something we can determine from pictures alone.”

Ballistic missiles are the main way countries threaten each other with nuclear weapons, but they’re not the only way. The only atomic bombs ever used in war were carried by bombers, but bombers come with several limitations. They have to fly close to the target to release the bombs, and they can be shot down by fighters and other anti-air weapons en route. Submarines, instead, can carry missiles secretly under the sea, and then launch their deadly payload without warning. North Korea is currently pursuing a submarine-launched ballistic missile, which went from a spectacular failure of a test in December 2015 to a modestly successful 300-mile flight in a test in August 2016.

Besides submarine missiles, North Korea’s arsenal includes short- and intermediate-range missiles, which can threaten nearby countries but still can’t cross the Pacific ocean to the United States. To strike at America, it’d need to travel several thousand miles, something only intercontinental missiles available to Russia, the United States, China, India, and maybe Israel can do.

And North Korea’s showing progress toward that end. From The World Weekly:

Because ballistic missiles leave the atmosphere before returning to hit their targets on earth, a working heatshield is vital to make sure that the nuclear payload survives the journey intact.

“What they haven’t done yet is test the vibrations on a dummy warhead,” explained Hanham. “And so, that’s probably going to be a component of their flight testing. They need to make sure—because the warhead itself will be somewhat delicate—that it isn’t shaken to pieces before it arrives at its destination.”

In addition, North Korea will likely want to make sure it has a working guidance system, so the missile can hit where it’s aimed. Unless, that is, North Korea sees value in the missile standing alone as a sort of terror threat, where the uncertainty about where it falls is sufficient for protecting the country from attack.

And because nuclear missiles are both weapons and symbols of national pride, what may look like test preparations on satellite footage could just be a political rally, notes John Schilling of the North Korea analysis blog 38 North. Indeed, that appears to be what happened on Jan. 19, 2017, when South Korean news service Yonhap reported a pair of North Korean missiles were placed on mobile launchers.

If North Korea’s likely future ICBM poses a political challenge to the United States, and it almost certainly does, what are the options for stopping it?

Missile defense is popular in Congress, despite having a very poor track record. In a report on one possible ICBM-destroying system in 2014, Congress recommended that further evaluation including realistic testing, which had so far not happened. A second problem is not just that some devices tested don’t work yet, but that the science of finding, tracking, and intercepting a missile is outright hard.

Lockheed Martin’s THAAD (for Terminal High Altitude Area Defense) is currently scheduled for deployment in South Korea to watch for a North Korean missile. While opposed by China, the deployment, set in motion by the Obama administration, is likely to happen; this week Secretary of Defense Mattis reaffirmed the Untied States commitment to the deployment. As designed, a radar for THAAD sees an incoming threat, relays that information to firing computers, and then tells a missile launcher to shoot a missile at the incoming missile. That’s a hard ask to begin with, even assuming THAAD is in place before North Korea tests an ICBM.

…And we don’t know what direction North Korea will even fire a missile when it tests one.

“North Korea has borders with Russia, China, South Korea, Japan is to the East, and it’s hard to know which way you would want to launch that thing and not get into trouble, while demonstrating range and reentry,” says Hanham.

“They do space launches by shooting from their west coast South, and that goes over the territorial waters of South Korea, Japan, and then the second stage usually lands around the Philippines. So … they could do that. It would still make people very very nervous. But, shooting toward the United States, for example, it would be hard for people to determine whether this is a test or an attack. My guess is that they would probably shoot south, in which case the U.S.’ defense system isn’t necessarily set up to intercept going something going that direction. So it’s a quandary, really.”

William J. Perry, who served as the Secretary of Defense from 1994 through 1997, penned an op-ed early in January about exactly how to respond. Under his tenure in the Pentagon, the Clinton administration considered and ultimately decided against attacks on North Korea’s nuclear infrastructure, preferring instead to dissuade the program with diplomacy. Those negotiations ended in 2001, and since then North Korea’s built enough of an arsenal to drastically increase the costs of war against it, especially for South Korea, it’s long-standing rival and an American ally.

Perry’s op-ed, written for an audience of one, argues for diplomacy to pre-empt an ICBM test. Perry writes:

Should that fail, Perry’s warning is simple and dire.

“If we don’t find a way—and soon—to freeze North Korea’s quest for a nuclear ICBM,” Perry concludes, “this crisis could all too easily spin out of control, leading to a second Korean War, far more devastating than the first.”